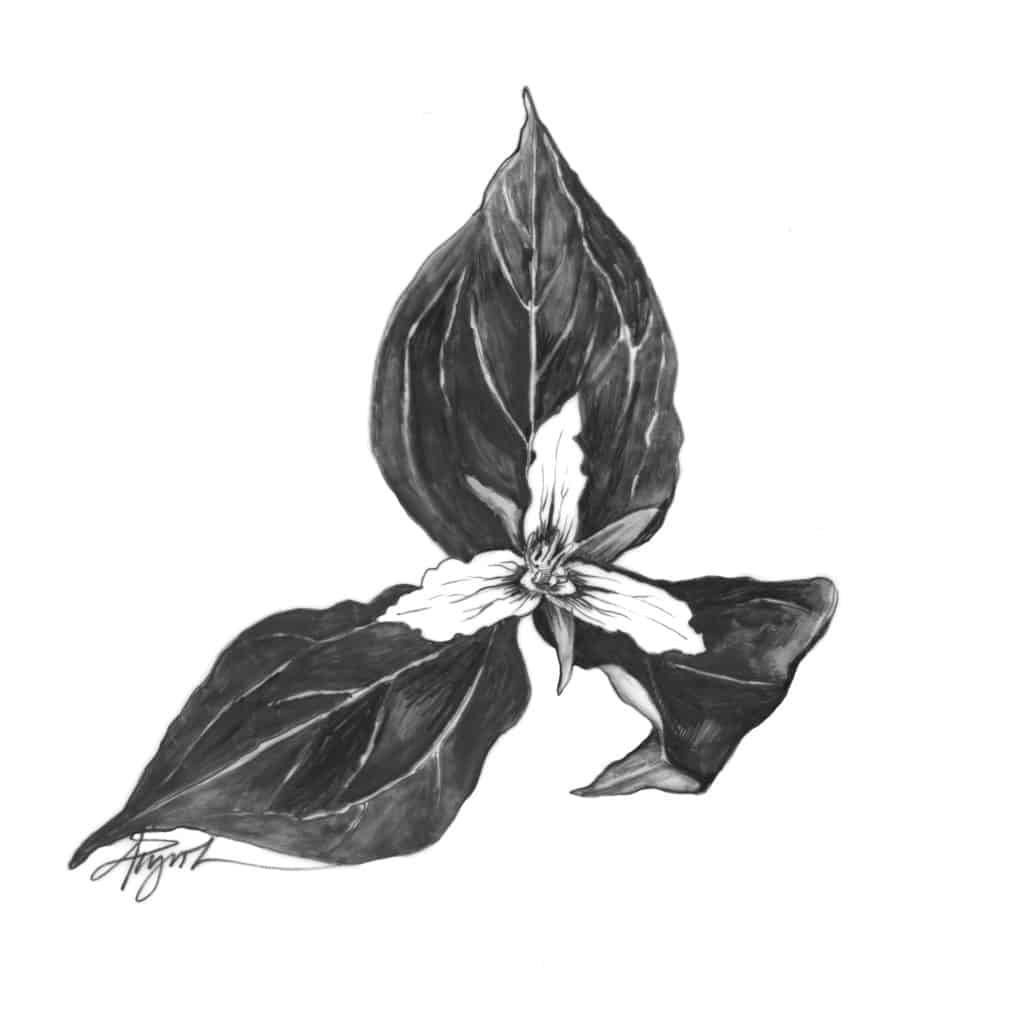 Once, when I was little, I was so thrilled to come across a gorgeous, dark-red trillium that I picked it and placed it in a vase in the house. I was disappointed when it quickly wilted. Not only that, but it smelled bad. Such is the dual nature of this spring wildflower: stunningly beautiful, with a scent that appeals to carrion flies.

Unpleasant aroma aside, the trillium is one of the best-loved woodland flowers, due to its early spring appearance and showy beauty. Of the nearly 40 trillium species in North America, four grow in the northeastern woodlands. Our most common are red trillium (Trillium erectum) and painted trillium (T. undulatum).

My father called the red trillium “wake-robin,” a name the plant earned because it blossomed around the time robins returned from their winter range. For a similar reason, it’s also called whip-poor-will flower. I love these poetic names, but I think “trillium” – from the Latin words tri (three) and lilium (lily) – is also lovely. The plant’s leaves, petals, and sepals all come in threes.

The trillium plant emerges in mixed deciduous forests, generally in damp, shady areas, before the trees fully leaf out. Unfolding from a tightly furled knob of leaves, the plant reaches a height of 7-10 inches. The stalk rises from a whorl of three large leaves, and is topped with a single, three-petalled flower. Because of its flower’s range of hues – from burgundy to pink – red trillium is also known as purple trillium, although its petals may also be white or even yellowish-green.

This trillium species produces no nectar, so the plant relies on its dead meat-like smell to attract pollinators. Carrion flies, drawn by this scent, lay their eggs on the leaves, which the larvae eat after hatching. In the process, the flies move pollen from one individual to another. The plant’s seeds may also be spread by ants, in an underground process called myrmecochory.

Other wildflowers, including bloodroot, Dutchman’s breeches, trout lily, trailing arbutus, and some species of hepatica and violet, also depend on ant colonies for dispersing their seeds across the woodland floor.

The red trillium’s smell provides another of its common names: “stinking benjamin.” Benjamin is not, in this case, a person, but a form of the word “benzoin” or “benjoin,” a plant from Sumatra used in making perfume. Other names for T. erectum include “nosebleed” and “birthroot,” a nod to the plant’s early medicinal uses, and “trinity lily” because its three leaves correspond to the Christian trinity.

Possibly even lovelier than the red trillium is the painted trillium, which looks like it has been streaked with a paintbrush. The center of its flower is deep pink or purple, with pink lines extending along the white petals to lead pollinators into the flower. Its flower’s wavy-edged petals are curved back very slightly to expose prominent yellow stamens. This trillium is also known as “painted lady” and “striped wake-robin.”

Another white-flowered trillium is the great white trillium (T. grandiflorum), sometimes called wood lily. Reaching a height of up to 17 inches, and with larger flowers than the red or painted, the great white trillium occurs from Quebec to Georgia and forms spectacular displays in the Blue Ridge Mountains. The nodding trillium (T. cernuum) also grows in northern forests, though it is not as abundant. Its white flowers hang downwards and may be hidden by the plant’s leaves.

After flowering (usually by June, depending upon species, location, and elevation), the leaves and stems of trilliums start to wilt, and a berry-like fruit appears, containing the plant’s seeds. Interestingly, trilliums take several years to appear in their familiar form. After a fertilized seed germinates, the plant spends its first summer or two as one tiny leaf. After reaching its three-leaved form, it stays flowerless for a season or more. In this case, good things are worth waiting for.

Laurie D. Morrissey is a writer who lives in Hopkinton, New Hampshire. The illustration for this column was drawn by Adelaide Tyrol. The Outside Story is assigned and edited by Northern Woodlands magazine and sponsored by the Wellborn Ecology Fund of New Hampshire Charitable Foundation: nhcf.org.