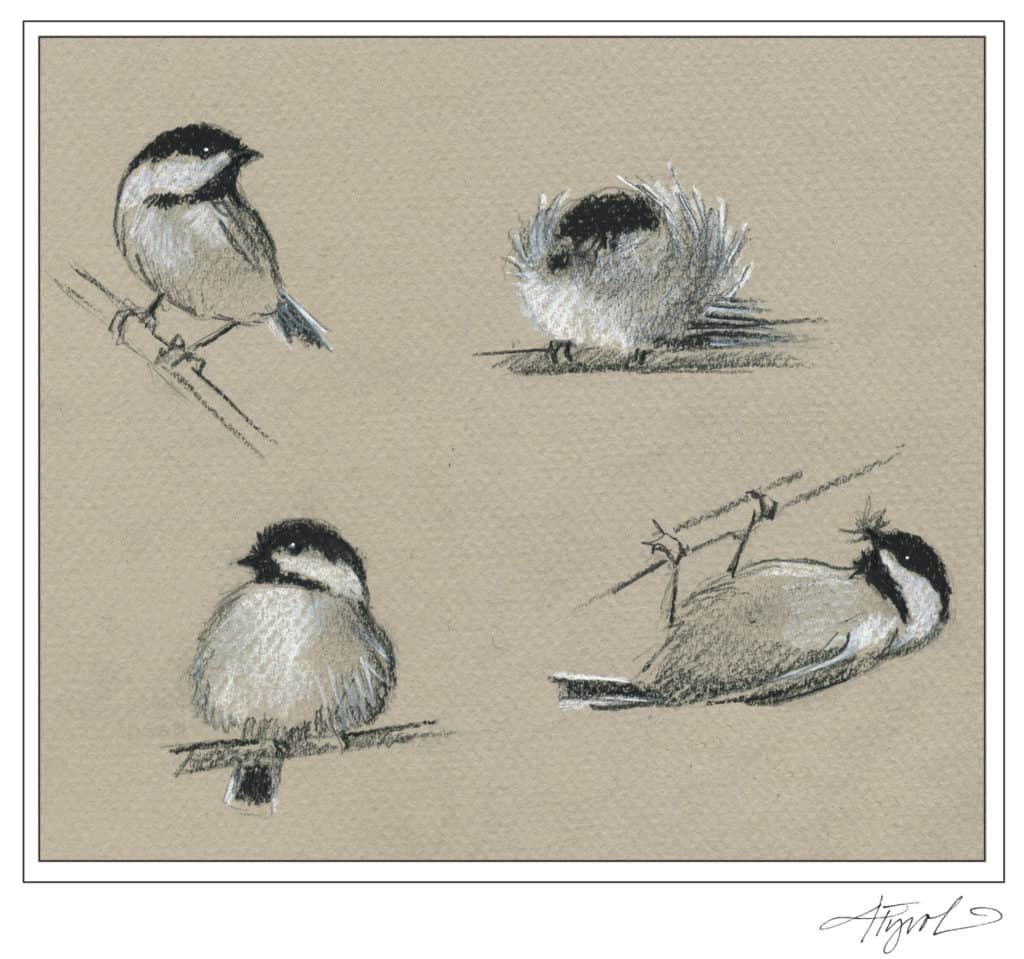 Black-capped chickadees are one of the most frequent visitors to our bird feeders in winter, but do we really know them? This common bird exhibits some remarkable behaviors and winter survival strategies.

Undoubtedly you’ve heard the familiar “chicka-dee-dee-dee” call in the winter woods. Soon after spotting the caller, with its black cap and bib, you’ll often notice more chickadees showing up on the scene, all calling. This is known as mobbing behavior. The chickadees are investigating to see if you are a potential threat. The birds don’t usually get too worked up when they see a human. (In fact, individual chickadees can become quite tame around people that provide food.) But they do get alarmed when they spot a perched hawk or owl.

Experiments by Christopher Templeton at the University of Washington found that the intensity of chickadees’ mobbing behavior is related to the size and potential threat of a predator. Templeton presented 15 different species of predators to chickadees in an aviary, and observed that the greatest response was to small hawks and owls perched in trees. These raptors are more of a danger to chickadees than large hawks and owls because of their ability to maneuver through the woods. The “chick-a-dee” call alerts other chickadees, recruiting them to fly to the area and join in the chorus. Information about the size and potential threat of the predator is encoded in mobbing calls. Chickadees add five, 10 or 15 more “dee” notes to their call when the threat is greater. Mobbing harasses the predator, lets it know it has been discovered, and usually drives it from the area (the element of surprise is essential to raptor hunting success). Templeton also found that red-breasted nuthatches have learned to read the warnings in chickadee alarm calls.

In winter, chickadees roam the woods in mixed-species flocks. In Maine, author and UVM biology professor emeritus Bernd Heinrich has observed nuthatches, brown creepers, downy woodpeckers, and golden-crowned kinglets following chickadees. In his book, “Winter World,” Heinrich notes that each species forages in different trees, on different parts of the same tree, or specializes in different prey so that they minimize competition with each other. The “many eyes” of the flock help detect danger.

Another advantage of living in a flock, according to Heinrich, is learning about food others have found. Chickadees are omnivorous, and the seeds, fruit, and insects they consume are often widely dispersed but concentrated in or on certain trees or shrubs. Many eyes make the food easier to locate.

Food-caching is another way chickadees survive the winter. The birds will store several hundred seeds or bits of fat from animal carcasses, each in a separate place. Lab experiments have shown that chickadees have an amazing memory and can accurately relocate hiding places, recall what type of food is there, and remember which sites they previously emptied. Colin Saldanha of Lehigh University discovered that in order to do this, the chickadee’s hippocampus, the part of the brain responsible for spatial memory, adds new nerve cells in the fall, expanding by about 30 percent. In spring, when its memory is needed less, the hippocampus shrinks to its normal size.

Even with all these remarkable behaviors, how does the little chickadee survive cold winter nights? One adaptation is their plumage: feathers are fantastic insulation and the chickadee’s plumage is denser than that of other birds their size. The birds also fluff up their feathers, trapping air that is then warmed by their bodies. They ball up to sleep in dense conifers or tree cavities, tucking their heads under a wing to reduce heat loss. If the cavity is tight, you might see bent tail feathers in the morning.

As chickadees feed on sunflower seeds at our feeders during the day, they accumulate fat which their bodies burn at night to produce heat. The birds stretch these fat reserves by lowering their body temperatures at night; this decreased physiological activity is known as torpor. They also shiver while asleep, converting muscular energy to heat.

So the next time you look at your feeder and think, “just another chickadee,” take a few moments to watch for some of these behaviors and appreciate the impressive adaptations of this familiar bird.

Susan Shea is a naturalist, conservationist, and freelance writer who lives in Brookfield. The illustration for this column was drawn by Adelaide Tyrol. The Outside Story is assigned and edited by Northern Woodlands magazine and sponsored by the Wellborn Ecology Fund.w