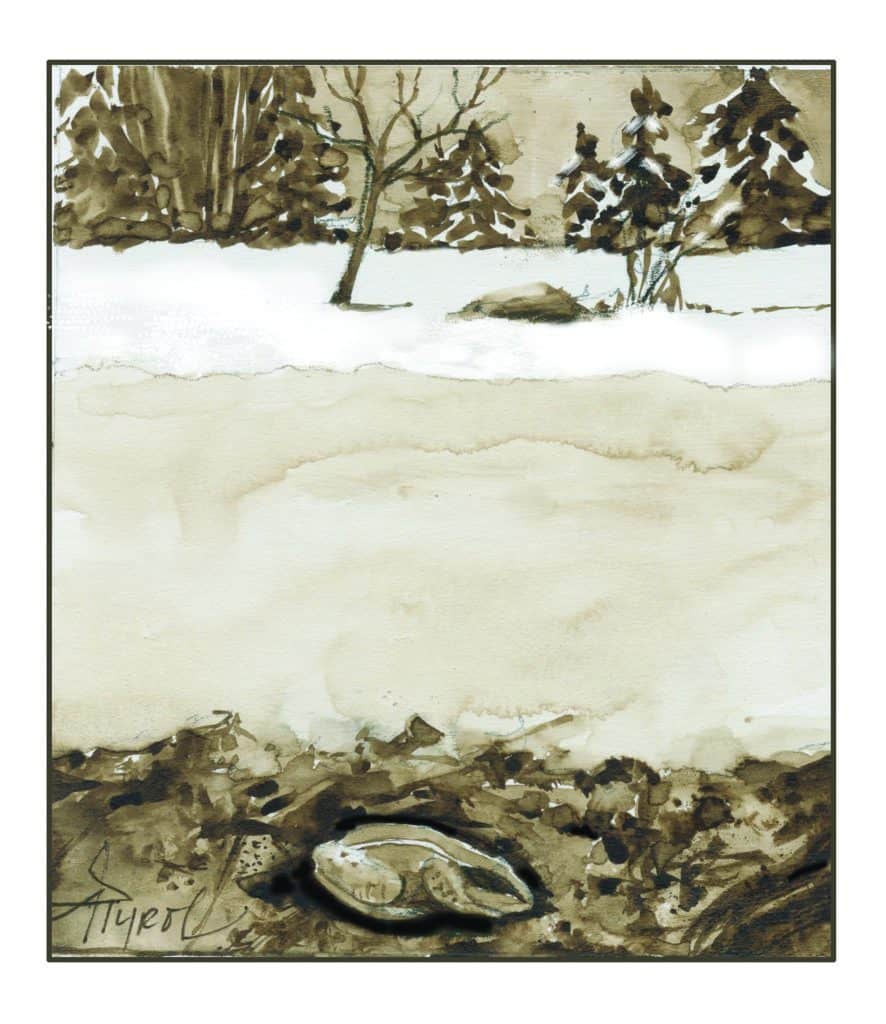 Every once in a while, as I’m tramping through the winter woods on my snowshoes, it occurs to me that I am walking on top of frogs.

In winter, our thoughts naturally turn to the species who remain within our sight – the chickadees at our feeders or the foxes who leave records of their travels in the snow – but any creature whose life spans more than one season, and who cannot fly away to warmer climes, must find a way to endure the cold. In February, our amphibians are all still here. They’ve just tucked themselves away for safekeeping.
As ectotherms, frogs’ core body temperature rises and falls with that of their surroundings, so when outside temps drop below 32 degrees, they need to either avoid the cold or learn to live with it. Most amphibians opt for freeze-avoidance, either by burrowing below the frost line (woodland salamanders) or by overwintering on the ice-free bottoms of lakes and streams (stream salamanders and aquatic frogs).

In the 1970s, Canadian biologists who lowered themselves through a hole in the ice on an Ontario pond in full SCUBA gear to search for rainbow trout (no, I am not making this up) were surprised to discover 15 northern leopard frogs (Lithobates pipiens) resting in small pits on the pond bottom. A decade later, another fish biologist conducting winter snorkeling surveys in an unfrozen Ontario river found leopard frogs resting dormant under rocks in the stream bed, their eyes covered by the nictitating membranes, or translucent “third eyelids,” that provide protection from floating debris. In both cases, the frogs were motionless – their metabolism slowed to a crawl, with oxygen exchange taking place entirely through their skin – but they were still capable of swimming away slowly when disturbed.

A study of bullfrogs (Lithobates catesbeianus) overwintering in two Ohio ponds – conducted by less masochistic biologists, who relied on radio transmitters instead of submersion in frigid water – found that the frogs moved about during even the coldest months, preferring shallow areas near inlet streams. The researchers hypothesized that the bullfrogs selected these sites because they were warmer and better-oxygenated than areas of slower-moving water.
While freeze-avoidant frogs eke out an existence beneath the ice, freeze-tolerant species wait out winter as living ice cubes. In our neck of the woods, gray tree frogs (Hyla versicolor), spring peepers (Pseudacris crucifer), and wood frogs (Lithobates sylvaticus) all possess this superpower, with wood frogs being the most well-studied.

Each autumn, as frost creeps ever closer, wood frogs ready for winter by fasting. Even in captivity, wood frogs kept under temperature and daylight regimes similar to those experienced in the wild refuse food once nighttime temperatures dip into the 30s. They then burrow under the leaf litter, where they create small cavities by rotating themselves to compress the surrounding soil. There, they crouch, drawing their legs in close and tucking their heads down in order to minimize surface area exposure.

When the cold descends, the frogs mobilize glycogen from their livers. The glycogen converts to glucose, which serves as a natural antifreeze, lowering the temperature at which internal ice crystals can form. Eventually, the frogs’ hearts stop beating, their lungs stop breathing, and up to 65 percent of the water in their bodies freezes solid. During this time, the frogs have no detectable brain activity. When spring arrives, they thaw in as few as four hours, though it takes about a day for them to fully rouse.

Remarkably, wood frogs spend the entire winter a mere 1 to 5 inches below the forest floor. Although above the frost line, these shallow burrows provide important protection from the elements. A recent study found that wood frog hibernacula in north-central Maine never dropped below 20 degrees, even when above-ground temperatures sank to minus 13. The snowpack insulates; the deeper and fluffier the snow, the warmer it is inside a wood frog’s hibernacula. In an ironic twist, warmer winters associated with climate change could result in colder, more challenging conditions for overwintering frogs.

The next time you find yourself standing atop a blanket of deep snow, pause for a moment. Let your mind travel down through the snow to the leaf litter, and a few inches further still, into the darkness of the soil and to the wood frog curled up, frozen but not lifeless, beneath your feet. Give thanks for the snow, which swaddles the frog, and for the frog, which is proof – if ever you needed it – of the miracles that take place unseen, every day, in the woods.

Brett Amy Thelen is science director at the Harris Center for Conservation Education in Hancock, New Hampshire. The illustration for this column was drawn by Adelaide Tyrol. The Outside Story is assigned and edited by Northern Woodlands magazine and sponsored by the Wellborn Ecology Fund of New Hampshire Charitable Foundation: [email protected]