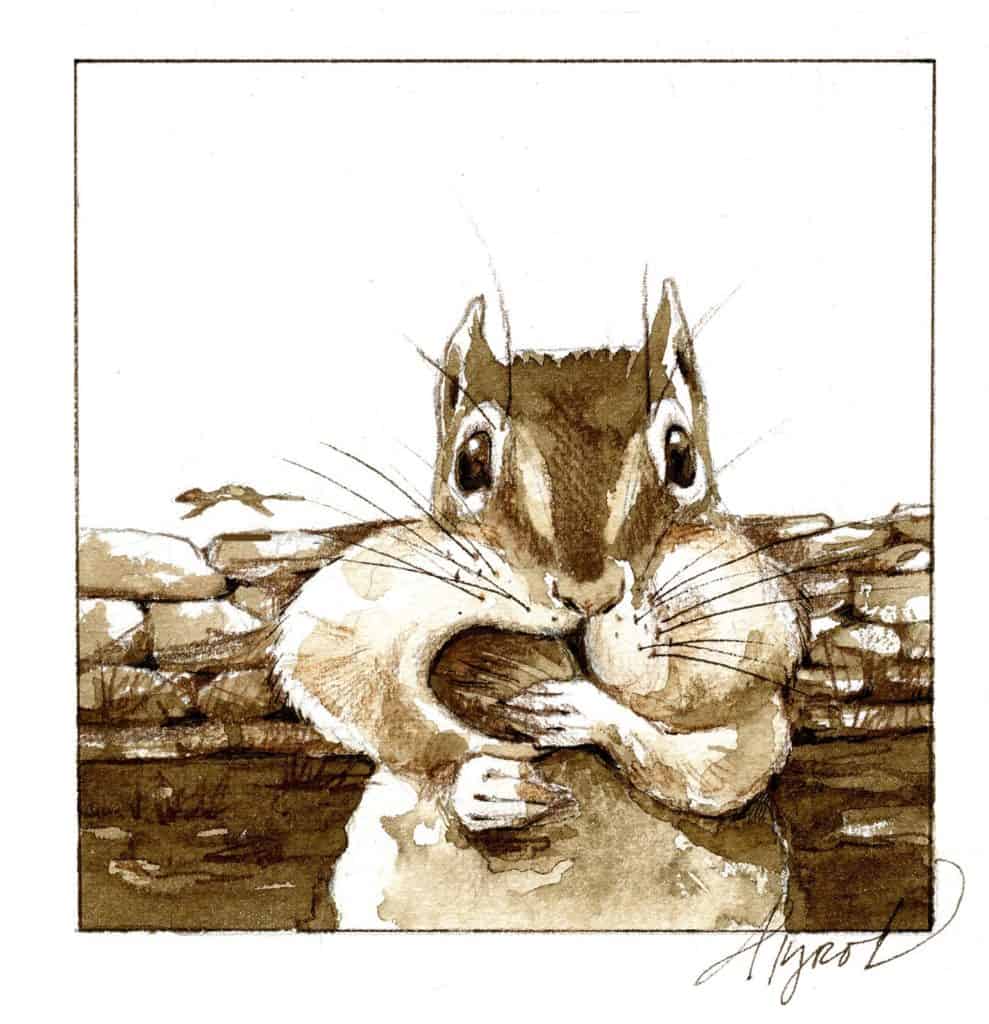 Two chipmunks vie for seeds on our front lawn. One lives directly underneath the bird feeder. Another hails from the far side of the house, address unknown.

The chipmunks appear identical to me: same size, same stripes. Same interests, namely seed hoarding, aggressive chittering, jumping into the bushes and back out again, and brazen stiff-tailed standoffs with the dog.

However, some aspects of these chipmunks’ behavior are probably distinctive. Experiments have demonstrated that chipmunks’ choosiness about what food they collect, how fully they stuff their cheek pouches, and even how quickly they stuff food in there all relate to the distance between a foraging site and a home burrow.

The eastern chipmunk, Tamias striatus, is a central-place forager. This means that, similar to the beaver and the honeybee, the chipmunk carries food back to a central location. In autumn, that location is the chipmunk’s winter burrow. It’s an impressive feat of earthworks that includes a bedroom, bathroom, several tunnels to the surface, and multiple larders.

As the winter cold sets in, the chipmunk retreats to its bedroom, tucks its tail over its nose, and sinks into a deep sleep. However, unlike many other hibernating mammals, it doesn’t sleep the winter away. Because it lacks fat reserves, it has to wake up frequently to feed.

In other words, chipmunks have good cause for their hoarding obsession. But their intense foraging activity has a cost. The time and energy that a chipmunk spends obtaining and hauling food from a particular site, be it a birdfeeder or a patch of forest floor, represent precious calories invested and other opportunities sacrificed. As established food sites are depleted, chipmunks have to go out and look for new ones, and this is an energy gamble. Long distance foraging may offer access to more desirable food sites, but it requires more travel time and increases the risk of predation.

Then there is the “loading curve” consideration. In general, the more food a chipmunk stuffs in its cheek pouches, the slower its subsequent stuffing, and therefore the greater its overall risk of predation. Nor is every food item created equal. In addition to issues of durability and nutritive value, some food is simply easier to harvest and stuff than other food.

As if all these factors weren’t enough to worry about, chipmunks have another problem to manage: other chipmunks. Chipmunk territories average about 5,000 square meters (a little more than an acre) and they overlap. This means that rivals lurk nearby, poised to snarf up food at a forage site, or even steal from undefended burrows.

So how does all this play out underneath the bird feeder?

Fortunately for the inquisitive, there has been extensive research in central place foraging over the past few decades, and the chipmunk has been the protagonist of numerous scholarly papers. Some of these veer to the unintentionally funny. My favorite example, a paper out of the Université du Québec, describes an experiment assessing chipmunk reactions to sunflower seeds that had toothpicks stuck to their shells with Advanced Formula Instant Krazy Glue®.

Out of all this research emerges what might be called the guiding rule of chipmunk game theory. Chipmunks have evolved to be energy maximizers. They seek to strike the optimal balance between the energy gain per cheek pouch load and the highest possible number of trips back to the burrow. In the absence of other variables, a chipmunk that is near its burrow will have smaller pouch loads and make more frequent trips than a chipmunk from a distant burrow, which will stuff its cheeks full before heading back home.

Of course, chipmunks’ lives teem with other variables, and studies show that chipmunk behavior adapts to take many of them into account. Here are some basics from what might be called Chipmunk Game Theory 101.

If another chipmunk is making a lot of noise, it might be fussing at you, but it also may have spotted a hawk or a weasel. Slow down pouch stuffing and look out for predators. If food is low quality and far from home, seek another foraging site. If a site has a dwindling supply of food, or if the food requires extensive handling time (for example, some jerk covered the seeds with toothpicks and Krazy Glue), take time during your return trip to explore alternative sites. If a dominant chipmunk temporarily vacates a food site, spend more time there and stuff all you can. If another chipmunk is at the food site, slow down stuffing and keep an eye on him. If a subordinate chipmunk is intruding on your territory, chase him. Sure, it will cost you energy, but it will cost him energy too, and maybe he won’t come back.

Of course, it’s easy to imagine more factors: weather, steepness of terrain between burrow and foraging site…how about pouch fatigue? My small primate brain boggles at the complexities. It’s enough to make me want to chitter aggressively, jump into the bushes, and jump back out again.