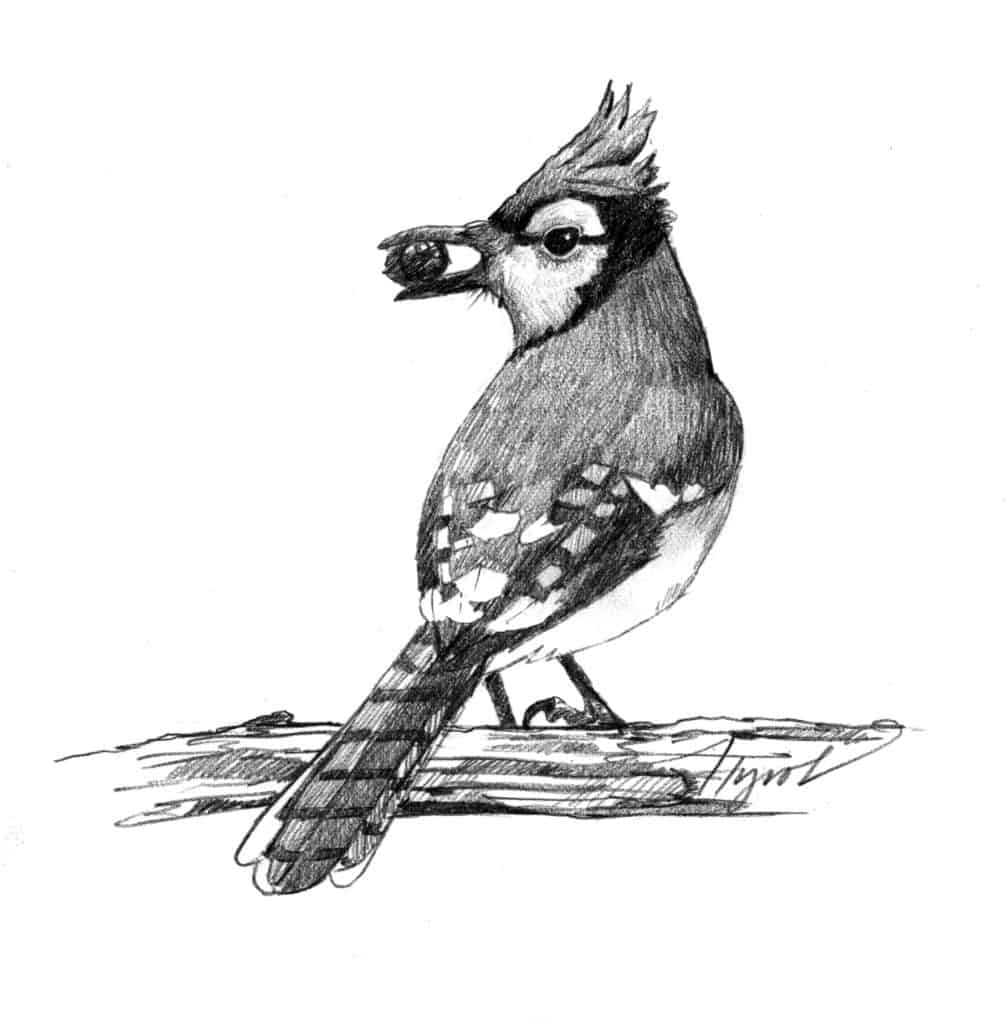 Plenty of backyard birdwatchers consider blue jays (Cyanocitta cristata) the villains of the avian world. Mark Twain best summarized anti-blue jay sentiment when he compared the bird’s principles to that of an ex-congressman. In Native American lore, blue jays are portrayed as thieves and tricksters. Understandably, this songbird generates antipathy for its nest marauding, birdfeeder bullying, and generally aggressive attitude. Boisterous and colorful, blue jays are seen as unrepentant by their detractors.

But the blue jay’s outlandish behavior does benefit other birds. As Stan Tekiela noted in “Birds of Maine Field Guide,” blue jays are “known as the alarm of the forest, screaming at any intruders in the woods.” Anyone who has spent time outside has likely heard the blue jay’s rowdy call, alerting other birds to the presence of a predator. Blue jays will also mob raptors as needed; when a hawk cruises by, the oft-maligned blue jay provides a critical service for other songbirds in the vicinity.

In another example of inadvertent benevolence, the blue jays’ preference for acorns and beechnuts helped facilitate the migration of oak and beech trees thousands of years ago. By caching nuts in the ground, blue jays helped spread these nut-bearing trees northward at the end of the Ice Age. This act clearly benefitted numerous species of wildlife. Today, blue jays continue to move oaks around, linking stand to stand.

As backyard birds go, blue jays are highly intelligent and resourceful. If nothing else, this should count in their favor as well. The late Joseph F. Gray, a Maine naturalist, noted in “Nature’s Mystique” that blue jays acquire calcium by peeling paint from homes. He also observed jays finding and eating eggshells. Blue jays famously mimic certain hawks, which may enable them to clear out a bird feeder before dining.  Although devious, this is another indication of their brain capacity.

Beyond acorns, blue jays have an eclectic diet and will eat fruits, insects, carrion, spiders, snails, tree frogs, and rodents. At bird feeders, blue jays make off with seeds, suet, and peanuts. The latter appears to be an irresistible draw, ensuring a steady crop of blue jays in and around your backyard.

Blue jays have a geographic range that is as expansive as their diet. Common throughout the Northeast, they are found year-round from Florida to southern Canada and as far west as Montana. In recent years, they’ve become a regular but still uncommon winter migrant to Oregon and Washington. Forest birds, blue jays thrive in a variety of habitats but prefer wooded edges and oaks. You may also find blue jays in your garden or suburban backyard. In Maine, where I live, blue jays haunt riversides, quiet forests, and developed areas.

Nesting occurs during spring or early summer. Blue jays are monogamous, and pairs may stay together for life. Both the male and female construct the nest, a cup composed of grass, twigs, and rootlets. Found well above the ground, these nests usually support a clutch of four or more eggs. Young blue jays fledge about three weeks after being hatched.

I associate blue jays with early fall. Their call conjures up memories of being in the Maine woods under a brilliant blue September sky. Amidst the oaks and pines, the blue jays fly back and forth, loudly proclaiming their presence. Perhaps they, too, savor the final days of warmth before the long slide into winter.

As the weather cools and the transition to autumn begins, most blue jays will remain in the region. However, for reasons not fully understood, some blue jays will migrate further south. For year-round blue jays, there is food to secure and cache. Bird feeders throughout northern New England will continue to provide easy meals.

In my front yard, I watch blue jays swoop down and land on my feeders multiple times a day.

Taking cover in the  branches of an overhanging red maple, they appear wary and alert. Suddenly, one will let out a passable broad-tailed hawk impression, clearing other birds from the feeders. With the coast now clear, feeding commences. Frequent visitors, the blue jays seem to be attuned to when the feeders are resupplied.

Blue jays may not win any popularity contests, but I like them just the same. Watching these peanut-loving visitors has provided moments of predictability in what feels like an increasingly unpredictable world.

Lee Emmons is a nature writer, public speaker, and educator. The illustration for this column was drawn by Adelaide Tyrol. The Outside Story is assigned and edited by Northern Woodlands magazine and sponsored by the Wellborn Ecology Fund of New Hampshire Charitable Foundation: nhcf.org.