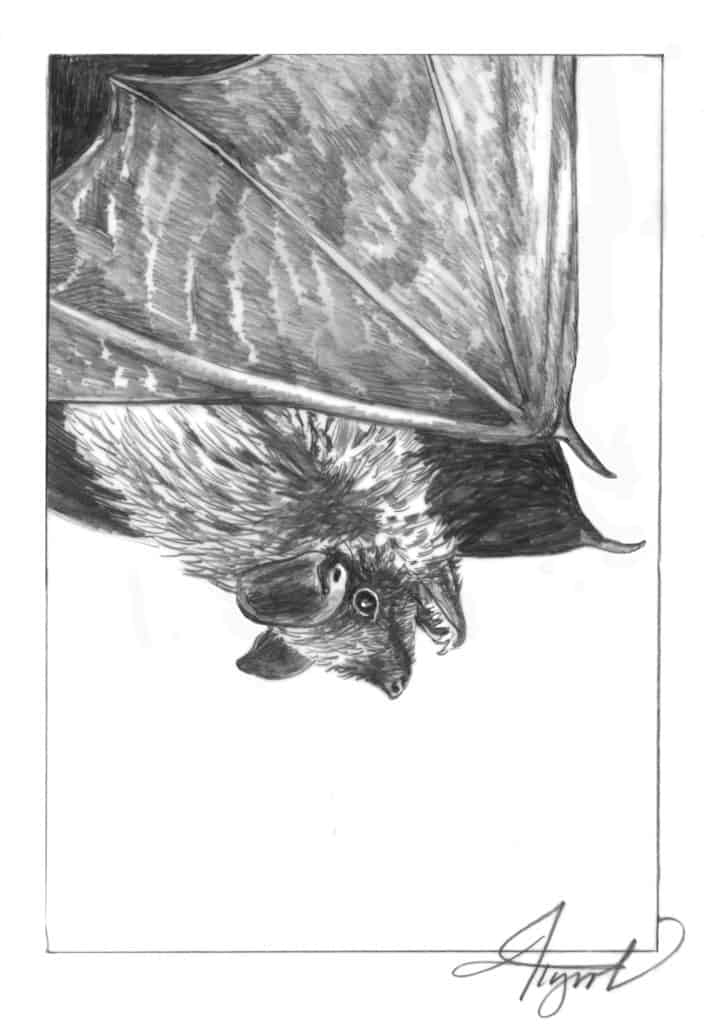 As spring arrives, so do… bats. Like many other naturalists, I spend lots of time during this season looking for migrating salamanders and blossoming bloodroot. I’ve never thought much about what bats are doing this time of year. It turns out these flying mammals, who retreated into hibernation back in the fall, are emerging from April through May, as the weather grows consistently warmer and insects again fill the air.

During summer, bats spend their waking hours – generally during twilight and dark – foraging for food. They hunt on the wing, using echolocation to nab tiny insects, from agricultural and forest pests to mosquitoes. Bats eat up to half their body weight daily and consume literally millions of insects each summer. As winter sets in and insects become scarce, six of the nine bat species in New England seek out hibernacula: caves, mines, rock crevices, even our attics and barns. Many bats are susceptible to white nose syndrome during hibernation, when they share space with hundreds or even many thousands of bats of various species.

Like other hibernators, including black bears, bats enter a sleep-heavy torpor state. A bat’s body temperature may drop to near freezing, and its heart rate decreases from a rate of 200-300 beats per minute to as low as 10 beats per minute. During hibernation, a bat cycles through periods of torpor lasting from days to weeks. This is interrupted by brief periods of arousal, during which a bat’s temperature rises back to normal for a few hours.

While occasional emergence from torpor is normal, however, researchers believe white nose syndrome causes disruption to hibernation cycles, leading affected bats to prematurely expend precious energy reserves they need to survive the winter. First identified in a cave near Albany, New York, in 2007, white nose syndrome has expanded to bat colonies in nearly half of U.S. states and parts of Canada. This fungal disease spreads easily and has decimated bat populations in the Northern Hemisphere.

Because the fungus can remain in a cave even after bats are gone, it is transmissable between colonies. The fungus grows on the skin of bats and it makes them more likely to wake early and erratically. As they burn through their fat reserves, bats can starve and die. All six cave bats living in New England are now state-level or federally endangered. Populations of the little brown bat and northern long eared bat have declined 90% due in large part to white nose syndrome.

Bats that are able to survive white nose syndrome during hibernation may recover during the summer, when high temperatures kill the fungus. According to Katherine Ineson, a PhD candidate and wildlife biologist at the University of New Hampshire who studies white nose syndrome in the Northeast, “The fungus damages their wings. But unless the damage is extreme, the bats are able to clear the infection and heal their wings within several weeks of emerging from hibernation.”

Female bats generally leave hibernacula earlier than males, who emerge shortly after and aren’t involved in raising pups. During spring and summer, female bats gather in maternal colonies, congregating in trees, attics, or barns. Summer colony size varies by species and location. Little brown bat colonies may number in the thousands, while other colonies, particularly bats that roost in trees, typically contain fewer than 100 bats.

Although bats from most species mate in the fall, females are able to store sperm and delay fertilization until spring. Each female typically gives birth to a single pup. Pups are able to fly when they are about a month old, but continue to use the maternal roost as they learn to forage on their own.

I have yet to see a bat silhouette moving quickly across a dusky sky this spring, but I’ve added them to my list of things to look for during this season. Their presence – while so fleeting in the night –is a welcome one.

Olivia Box is a freelance writer and a graduate student at the University of Vermont, studying forests threatened by climate change and invasive pests. The illustration for this column was drawn by Adelaide Tyrol. The Outside Story is assigned and edited by Northern Woodlands magazine and sponsored by the Wellborn Ecology Fund of New Hampshire Charitable Foundation:  nhcf.org.