When I was little and tagging along when my dad tended his vegetables, I would sometimes find large black and

yellow garden spiders. They were beautiful, and I noticed they had a curious trait: they often added a bright white decorative zigzag to their webs. I always wondered why, if a spider web is meant to catch insects unawares, these spiders would go to such effort to make their webs more visible?

To answer this question, I recently spoke with Dr. Todd Blackledge, who researches spider silk and the web decorations of garden spiders.

Garden spiders spin orb webs – in other words, the type of webs with a classic circular shape. These webs include two main structures: a framework made of strong dragline silk and a spiral made of sticky prey-catching silk. To produce web decorations, also known as stabilimenta, the spiders spin a third kind of silk, the same kind they use to wrap up their prey for later snacking.

Blackledge explained that the term “stabilimenta” originated from an early hypothesis that the extra silk stabilized the web, but no one credits that idea anymore. The term has broadened to include both extra silk added to the main web structure, and other items that orb weaving spiders deliberately add to their webs, such as plant bits or prey remains. 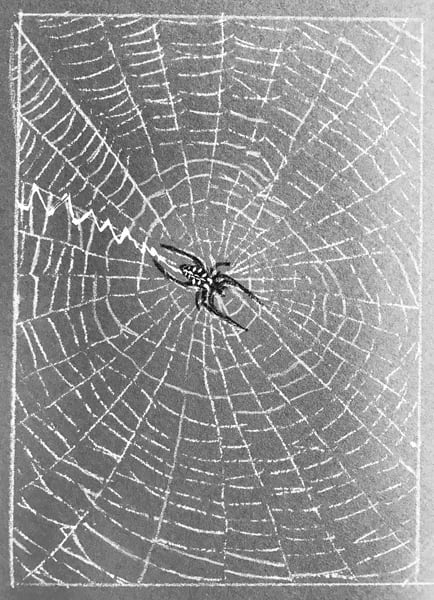 The silk stabilimenta made by northeastern spiders typically have two basic shapes: a disc shape that can include spirals and the zigzag vertical line that I noticed as a child. A spider tends to make only one type of decoration at a time; as it ages, it may switch between shapes. For example, Blackledge explained, often young garden spiders will use a disc shape, then switch to a vertical line as they get bigger.

Since stabilimenta don’t stabilize webs, what is their purpose? According to Blackledge, there are two favored hypotheses: they attract prey, or they are a defense against predators.

It never occurred to my younger self that webs could attract insects. The silk used to make the decoration is reflective to ultraviolet light, as many flowers are, and some researchers suspect that insects confuse stabilimenta for flowers. Some circumstantial evidence: field observations have revealed that decorated webs tend to have more prey in them.

However, there’s a catch to these observations: well-fed spiders are more likely to decorate their webs. According to Blackledge, the cause-and-effect may go in the other direction; it’s possible that webs that are already catching more prey are more likely to be decorated.

To explore this question, Blackledge set up some controlled experiments. What he observed was that webs with stabilimenta caught 30 percent fewer prey. He suspects that these webs were easier to see and avoid, and that spiders decorate their webs for a defensive purpose.

While spiders are skilled predators, many creatures like to eat them, too. When they’re sitting on their webs, orb weaving spiders are especially vulnerable to flying predators. Many wasps catch spiders on their webs and carry them back to the nest for their larvae to eat.

According to Blackledge, the spider species that tend to make stabilimenta are the type that sit on their webs during the day, when they are easiest to see. Web decorations may act as a blind, disguising the spider’s shape from marauding wasps. He added, “breaking up their outline for camouflage is likely especially important for small spiders. They can physically hide behind the stabilimenta too, but this probably isn’t as important.”

It’s still an open question whether prey attraction or predator defense, or both, or some other idea entirely, explain why spiders decorate their webs. Like so many questions we ask when we’re kids, the answer is elusive, and most likely complicated.  For my own part, their mystery makes these structures all the more appealing.

Rachel Marie Sargent lives and writes in Duxbury, Vermont. The illustration for this column was drawn by Adelaide Tyrol.