My favorite thing in all the world at this time in my life is spending time with our 3-year-old grandson, Silas. “Papa” and I recently spent several days trying to

keep up with and care for him. Some conversations with our favorite little guy surprised and amused us, like this:

“I want a idermon,” Silas said.

Silas’ fresh perspective also offered valuable life lessons, such as, know who you are:

“Are you Cutie Pie?”

“I’m not Whippersnapper. I’m Silas Daniel Finger and that’s who I am!”

The trio attended the show, “Charlotte’s Web,” performed live in Old Sturbridge Village’s Freeman Farm yard. When Silas and Gammy peeked through the fence slats, they saw two little pigs playing in the mud. The pigs splashed and splattered while rolling around, then their “stinky mud” flew up into their faces.

Gammy agreed. It was as yucky as could be.

“I didn’t like that, Gammy!” Silas exclaimed. “Neither did I,” Gammy agreed.

Know what you love:

“I love Mommy and Daddy and they love me sooo much! I love making and eating maple syrup pancakes. I love to read books and go on hikes. I love water wings and to swim in the lake. I love, love, love to play outside.”

Silas devoured delectable clam chowder in “Daddy’s yummy restaurant,” The Duck, during a luncheon with his new friends from France. They presented him with three wooden puzzles which he put together saying, “I love puzzles so much!”

Know what you want:

“That was the last book, Silas. Now it’s time for bed,” Gammy said.

“Kettle?” Gammy asked. “Why do you want a kettle, Silas? Should I put the kettle on to boil water and make a cup of chamomile tea?”

“You want to cuddle! Okay, Silas. We can do that!”

Gather knowledge and store it away. Listen. Learn. Absorb. Observe.

Papa drove Silas and Gammy around Spencer and Sturbridge, Massachusetts, where deer were spotted along with some families of wild turkeys and Canada geese.

“Look at that!” Silas said repeatedly. “A water tower, a tractor, a windmill.” He and his Newfoundland dog, Shiloh, were also excited to see squirrels and bunnies on neighbors’ lawns. (Shiloh tried to run after them, and nearly pulled everyone else along!)

Silas often burst into song with: “Old Mac Donald had a farm, ee-i-ee-i-oh.” “I’m a little teapot short and stout” came up quite a lot. “The itsy bitsy spider” and “The Farmer in the Dell,” “Abcdefg . . . Won’t you come and play with me?” followed. He painted pictures and happily played with his favorite toy—Thomas the Train.

Silas dictated a book based upon Gammy and Papa’s recent and very exciting bear visit: 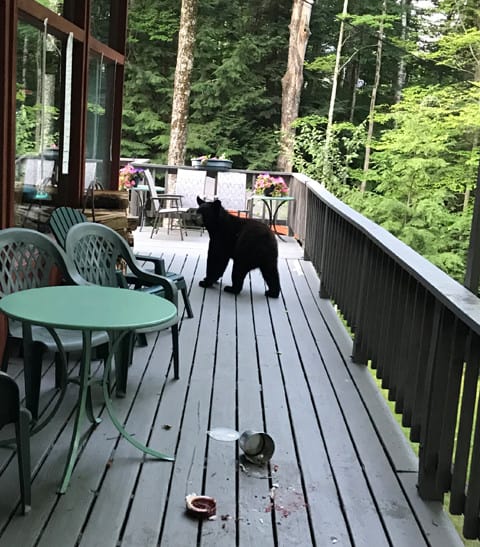 “The Bear on the Deck” by Silas Daniel Finger

Once upon a time Gammy heard a loud noise and a big “crack.” “Boom!” What was that noise? What could it be? A gaga? She turned on the light on the deck outside and what did she see? A bear on the deck drinking the hummingbird juice and thinking it was very yummy. She woke up Papa who was as asleep.

Papa took a picture of the bear on the deck who was gobbling up the wax in the citronella candle.

As the hungry bear walked away he spat out the citronella.

Marguerite Jill Dye is an artist and writer who divides her time between Vermont and Florida’s Gulf Coast.