What do Luke Skywalker, the Buddha, Odysseus and Dorothy from “The Wizard of Oz” all have in common? Answer: They are all the same person on the same journey.

I know that statement sounds a little absurd, but according to the great writer, philosopher and mythologist, Joseph Campbell, these four individuals along with countless others throughout history, represent the same archetypical hero on the same epic path.

Joseph Campbell spent a lifetime reading, analyzing and comparing stories and myths from every corner of the globe in every time period available and derived an immense understanding of the interconnected relationship that existed between them.

Campbell postulated that heroic myths give mankind guidance because they carry universal truths about self-discovery. He also claimed that all spirituality is the search for the grounding force which all life and the universe comes from. Knowing this force outright is impossible so we must create metaphorical myths and stories to help us better understand it.

In other words, humans created the hero myth to represent what every individual goes through during the struggles of life. At some point in our lives, we all are forced into an epic battle that ends with self-discovery. Whether it’s the dissolution of a relationship, the loss of a job or the onset of a disease, we travel the same basic path while we see the challenge through to a resolution.

While classic hero stories tend to be epic in their content, they can still be closely related to the struggles of the common man fighting to overcome the throws of a painful situation; the two are closely related, throes the content is different.

Epic hero stories also offer a representational map of the journey and therefore not only entertain us, but give us guidance as well.

Take a minute and compare the four aforementioned names and consider their individual journeys. All were pushed out from the comfort of their lives, given a task to complete or obstacle to overcome and then returned home victorious.

Think of any other hero story and you’ll find that they too will follow the same path (Campbell spells out this phenomenon further and in much greater detail in his famous book “The Hero with a Thousand Faces”).

So the next time you face a daunting situation, consider watching “Star Wars” and taking a cue from Luke Skywalker. You may find that his approach in dealing with Darth Vader and his embrace of “The Force” have more to offer your situation than you might think.

Famed psychotherapist Carl Jung came to a similar conclusion when he dug into the unconscious mind to discover how mythological forces working within the individual can shape a personality. Jung formed the concept of the archetype to explain the commonality of hero images found in various groups throughout the world.

Jung theorized that certain behaviors and thoughts in individuals and societies spring from a common palette of characters and situations that the mind retains from early human consciousness development. In Jung’s mind, the archetypal hero represents the psyche’s quest for uniqueness.

This week’s feature, “Hercules,” is a perfect example of the hero myth and the superman archetype and undoubtedly a story that both Joseph Campbell and Carl Jung spent hours studying. 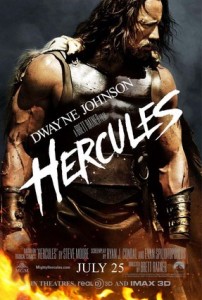 “Hercules” is based on the popular Greek myth of a half man/half god – the son of Zeus’ union with the mortal Alcmene. In this rendition, however, we meet only Hercules the man.

The movie follows Hercules and his band of faithful cohorts who act as mercenaries across the ancient world. If someone has the gold, they’re willing to fight. That all changes, however, when the group finds themselves on the wrong side of a brutal war.

I must admit that I liked the fact that this film resisted the urge to delve into the “gods” arena and instead based its story firmly in reality, where it eventually had a more powerful impact.

Dwayne Johnson (aka The Rock) did a solid job portraying the conquering hero. He’s not an actor’s actor and he probably won’t ever be in line for an Oscar, but given what he had to work with, he more than delivered the goods (it also helps when you have arms the size of compact SUVs).

I brought my son and a couple of his buddies, all of whom were 10 years old, and they were mesmerized. They came out of the theater ready to engage in hand-to-hand combat and were at each other for the next two hours in our yard – but it was all in good fun.

There was plenty of death and destruction in this film, but the producers were smart enough to make most of it perceived, which conveniently caters to a younger audience.

Moviegoers with a more discerning palate will probably find little to revel in with this film, but it’s certainly worth going to with a youngster who has visions of being a hero.