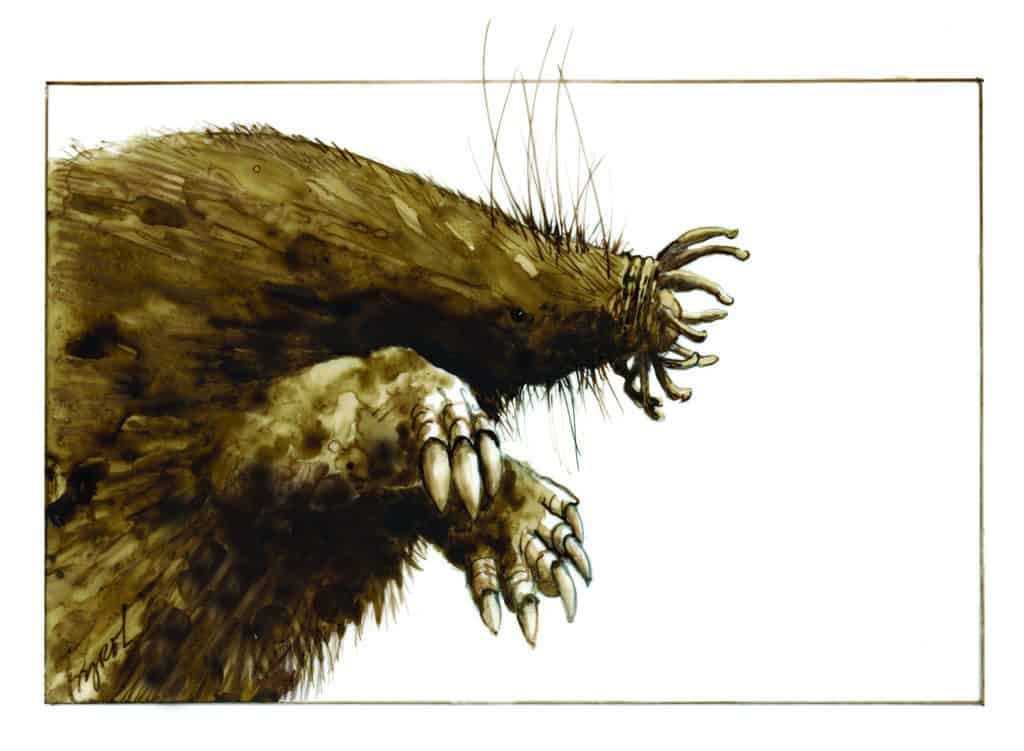 Some people have life birds, species of birds they’ve waited their whole lives to see in the wild. I don’t have one of these, but I do have a life mole. I’ve been waiting to catch a glimpse of Condylura cristata, the star-nosed mole, ever since I learned about this animal during a small mammals course in graduate school. Can you imagine a palm-sized mole whose pink, star-shaped nose contains 22 fleshy tentacle-like appendages, living right here underfoot in New England?

I spent years searching for this mole, wandering along the margins of wetlands, looking for the raised ridges of its tunnels in the moist soils. I came close several times, following the ripple of a tunnel until it disappeared below ground. It is hard to lay your eyes on a creature that spends much of its life underground or, in this case, underwater: the star-nosed mole is the only semi-aquatic mole in the world.

The day that I did finally see one, I had given up looking. I was sitting on a rock at the edge of a marsh in the sunshine. Red-winged blackbirds were calling, and swallows skimmed the water’s edge. There was a constant chirping of spring peepers tucked into reedy hummocks, and I was lost in the way spring was unfolding before me.

Out of the corner of my eye, I caught a movement under the water. Swimming along the marshy bottom was a star-nosed mole! Its generous pink nose was raised above its head like the rays of a sea anemone. I could see its large front paws, which remind me of catchers’ mitts, paddling as it swam above the murky bottom.

As I watched, I remembered learning that star-nosed moles can actually smell under the water. By continuously exhaling air bubbles through their nostrils, then re-inhaling the same air, they capture odors while submerged and can follow scent trails. I wondered what underwater smelled like to the mole and what the difference in scent was between a caddisfly and midge, two aquatic invertebrates star-nosed moles eat.

I watched this life mole of mine climb out of the water onto the edge of a grassy hummock, its velvety short fur barely looking wet. It tended to its star, dipping it into the water and using its meaty front paws to ever so gently tidy up each tentacle. The end of its snout looked like it had sprung a bouquet of tiny pink fingers, each one moving on its own.

It may seem like this mole must have an incredible sense of smell to go along with such a schnoz. Those 22 rays are used more for touch than for smell, however. Each ray is covered with unique and highly sensitive touch receptors called Eimer’s organs. These organs are found on the snouts of other mole species, but the star-nosed mole is the superstar when it comes to this organ. The species’ most well-known researcher, Kenneth Catania, said a star-nosed mole’s snout contains more than 100,000 of these sensory neurons, and said “the star is probably the most sensitive and highly acute touch organ found on any mammal.”

Video footage of star-nosed moles shows them in their damp tunnels, with their snout out front, sweeping from side to side and touching the tunnel from top to bottom. These moles are voracious predators, consuming 50% or more of their body mass each day. When encountering a choice morsel, like an earthworm, it moves in swiftly to eat.

Catania noticed that star-nosed moles consistently touch their prey with one pair of rays in particular. The 11th rays can, in a sense, see the prey as well as feel it. Catania’s studies of star-nosed moles’ brain development show these rays, the smallest of the mole’s appendages, represent the largest part of the mole’s brain, similar to the way vision is represented in other animals’ cortexes.

I haven’t seen another star-nosed mole since that spring day in the marsh. But each year I go back exactly to where I sat that day. I still get lost in the way winter yields to spring as I sit on that rock. But I am really there hoping for one more glimpse of this silky mole who feels and sees with its starry snout.

Susie Spikol is the community program director for the Harris Center for Conservation Education in Hancock, New Hampshire. The illustration for this column was drawn by Adelaide Tyrol. The Outside Story is assigned and edited by Northern Woodlands magazine and sponsored by the Wellborn Ecology Fund of New Hampshire Charitable Foundation: nhcf.org.