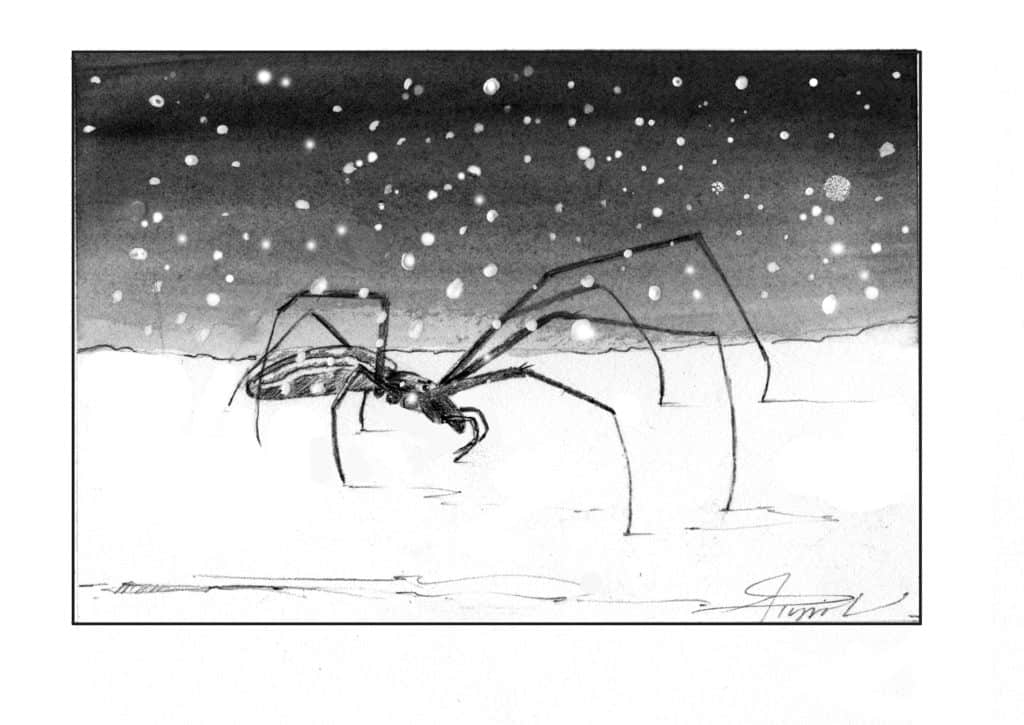 I have always admired nature’s mutineers: animals and plants that thwart the recognized system and do their own thing. As a child I was the sole member of my own duck-billed platypus club, endeared to this creature with the bird-like bill, beaver-style tail, and shocking ability to lay eggs. Other charming eccentrics: the tamarack, a conifer that loses its needles every winter; male seahorses that give birth to thousands of live babies; and the short-tailed shrew, a tiny mammal that uses a lizard-like venom to paralyze its prey.

I met my latest renegade while cross country skiing out my back door in Hancock, New Hampshire, on a sunny winter day. I had stopped to catch my breath when I noticed a dime-sized brown spider crawling on top of the snow. It looked so delicate. I bent down to inspect more closely its spindly legs, stretched out across the snow. I had always assumed spiders were either dormant during winter or had died after the first hard frost.

As I watched this spider make its way across the top of the glistening January snow, I had to consider a new possibility: could spiders, with their soft bodies and fragile-looking legs, really be able to brave winter’s chill and boldly walk about on the snow?

It is true that most spiders don’t really do winter. Many weather the cold months as eggs, tucked under leaf litter, into a rotted log, or snuggled beneath the bark of a tree. Others spend the winter as spiderlings, feeding on the yolk of the eggs from which they’ve hatched and awaiting longer days and warmer temperatures. And there are, of course, spiders that go dormant, buried beneath insulating snow and leaves, with their legs pulled up close to their bodies to help conserve heat and maintain moisture.

Some spiders, however, are occasionally active during the winter, usually when the temperature rises above freezing. The spider I spotted during my ski outing was a member of the Tetragnthidae family, known commonly as long-jawed orb weavers. According to Keene State College biology professor and spider researcher Karen Cangialosi, some members of this and other spider families can be active during the winter months. Often these spiders seek out protected microhabitats, like the warmer climes of the subnivean zone (under the snow), to avoid freezing.

Once, while researching winter spiders in New Hampshire, Cangialosi and her students discovered wolf spiders (Lycosidae family) inside small ice-caves along the banks of a stream. Cangialosi suspected these particular spiders were using the heat generated from the stream flow to stay just warm enough to be active. Other researchers have found that when winter temperatures rise above 34 degrees F, many of these winter hardy spiders will disperse, and some actually hunt things like Collembola, the arthropods we call springtails or snow fleas.

Spiders may also position their webs to take advantage of the sun’s warmth. Canadian researchers determined that some spiders orient their webs in an east-west direction, maximizing exposure to the sun as it moves across the winter sky.

Some northern spiders adjust their body chemistry to help them survive the coldest season. Certain spiders are able to lower their bodies’ freezing point by producing a cryoprotectant. Glycerol, which is the same anti-freeze compound found in some amphibians’ blood in winter, lowers the temperature at which a spider’s tissues will freeze and burst.

Before spotting that winter spider on the snow, my knowledge of the arachnid lifecycle was tied to E.B. White’s classic, “Charlotte’s Web.” I remember how Charlotte died at the autumn fair after saving Wilbur’s life, how Wilbur brought back her egg sac to the barn and watched over it all winter long until Charlotte’s babies hatched in the spring.

It seems not all arthropods are like Charlotte, though. Some of them are a bit like me, seeking the protected nooks and crannies of the winter landscape during the coldest times and venturing out on the sunny, warmer days.

I’ve found a new rebel hero for this winter, and the snow spider reminds me of one of the last things Charlotte tells Wilbur before she dies: “The leaves will shake loose from the trees and fall. Christmas will come, then the snows of winter. You will live to enjoy the beauty of the frozen world.” Next time I am out exploring on a winter’s day, I’ll be looking for spiders who, in their own, spider-sized way, contribute to the beauty of the frozen world.
Susie Spikol is community program director for the Harris Center for Conservation Education in Hancock, New Hampshire. The illustration for this column was drawn by Adelaide Tyrol. The Outside Story is assigned and edited by Northern Woodlands magazine and sponsored by the Wellborn Ecology Fund of New Hampshire Charitable Foundation.