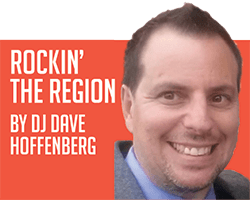 There’s a new band in the area that you all need to check out—the Super Stash Bros. Catch them this Friday at Center Street Alley; every Saturday night at Moguls Sports Pub; as well as the Moguls Pig Roast on Sunday, April 17. They also play at various places in the Rutland area.

The band started forming a year ago when Josh Jakab (guitar/vocals) and Vince Fitzgerald (guitar/vocals) started playing together. They met at Johnson State College. Six months ago they added Nick Vittone (bass/vocals). Those three are the core of the band and they use a couple of drummers, either Blake Gowan from Rick Redington and The Luv fame or Zach Parker from Bootleg. They also have Josh Morse (rapper/vocalist/lyricist).

The music they play is awesome, but even more awesome is their promotional material. They picked the name from the video game Super Smash Bros. because they all grew up playing Nintendo 64. Their posters are a play on the video game characters and the like. Jakab said, “The original joke was we would all have mustaches like the Mario from the game.” Jakab, Morse and Vittone all work at Green Screen Graphics in Rutland, where they design and make the posters.

The band plays a wide mix of rock, funk, reggae, hip hop and blues. Jakab tells it like this: “We try and keep it high energy. We take a lot of songs from when we were growing up, like the nineties, and that is three quarters of what we do. We also like classic rock so we throw that in but we try and put our own spin on things, keep it interesting. We don’t want to play it just like it is on the record.” Jakab’s favorite tune they’re playing now is “Don’t Let me Down” by the Beatles. He said, “That all changes especially when we learn a new song that we’re all digging.” The band practices every Thursday night.

Jakab was born in Nassau County on Long Island, N.Y. but grew up in Fair Haven and has been playing music most of his life. He started playing the piano in kindergarten and added the trumpet later in school. He didn’t pick up the guitar until he was 15. “That’s when I really started getting into it.” He’s 26 now. He had a class in high school that he learned from, and he taught himself as well. He had a band all through high school with some friends and he enjoyed playing with them; then he got the itch to play professional. “We played a lot of stupid gigs like in the park or at open mics and stuff like that. It was just a lot of fun. It’s a lot of fun practicing and jamming with people.” He got more serious with it when he went to Johnson State to study music and graduated from there. His first solo gig was at the Grey Fox Inn in Stowe. His first band gig was three years ago at Center Street Alley with a band called King B.

Musically, Jakab is a huge Deadhead, so they are his biggest influence. He grew up in the 90s so that music is big with him, like Blind Melon and Sublime. He also digs Bob Marley.

They also have an original project called “Sling Shot.” Jakab and Morse write a lot of the tunes for that. The music they’re writing and playing is similar to Super Stash Bros. but with more funk and hip hop.

Jakab has been writing music since he started playing guitar. His goal is to record an album. Jakab said, “We have about 10 originals right now and we’re trying to build on that. We have a whole bunch that we’re working on. We want to push that.” Jakab does a lot of solo work. too.

I met Jakab through [local musician] Aaron Audet who spoke very highly of him. I first hired him to do solo work and thoroughly enjoyed it. He has come a long way in under a year’s time. Last summer his band played a house party with me and their mix of music is great. You’ll be dancing along, singing along and just plain moving to their music. It’s hard not to like this band.

Jakab really loves performing and says, “You can’t beat when people are really into it. The energy there and everyone is dancing. Plus I get to play with a really good group of people. When the crowd is going good, everyone is locked into that energy. I love a lot of things about performing but that is a big part of it. I like to share my music with other people.”