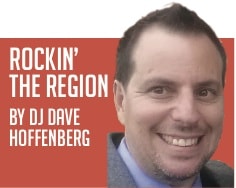 Almost Easy is making its Wobbly Barn debut this Friday night, Jan. 29 at 10 p.m. If you can’t make that, no worries because you get two nights with this great New Jersey band. It may be named after the Avenged Sevenfold hit song and also popular in Singapore because of it, but don’t expect to hear any of that band’s songs. Almost Easy plays a wide variety of pop punk, 80s, 90s grunge, heavy rock, R&B, Motown and hip hop. The band is made up of Pete Levine, lead vocals/guitar; Stu Berenson, lead guitar/vocals/sample production; Joe Martin, drums; Mark Hall, bassist/vocals; and Ann Marie Nacchio, vocals/guitar.

Levine describes the band saying, “We are seasoned musicians and we pride ourselves on having a consistent sound. We don’t play covers and make up our own version. We stay true to the original sound of the artist. We believe in a very engaging and energetic show with a big production.” Levine himself really likes playing rock music but also finds it fun to do hip hop. He says the crowd really gets into it when they do. Levine grew up listening to 90s grunge, so his big influences are Nirvana, Soundgarden, Pearl Jam, Stone Temple Pilots and Alice in Chains.

Almost Easy is celebrating its five-year anniversary this April. Its first show back in 2011 was at Willie McBrides in Hoboken, N.J. and to this day it is still one of their favorite places to play. They have a few other favorite New Jersey spots, like Just Jakes, The Osprey and Bar A. The latter is where the band was discovered by the Wobbly Barn. Almost Easy might be making its debut there but the guys are very familiar with playing at the Wobbly, having come up a bunch of times with their other bands. Almost Easy was formed from the merging of Bitter X and Screaming Broccolli.

Levine really enjoys playing in clubs. He says, “The best part about playing live is seeing and hearing the reaction of people that are out there. Your job as an artist in a live setting giving a performance is to make sure people enjoy themselves. That’s it. You want to sound good, look good and have high energy but all that has to come together into something that the crowd relates to and enjoys. You want to leave a show feeling like you did your job.”

Although you’re most likely to see Almost Easy in your hometown bar or nightclub, they have also been playing at the casinos in Atlantic City and have become quite the wedding band, too.