When I was growing up, my family rented a vacation home on a mountain in southern Vermont. One night we were awakened by our dogs barking. Soon we heard a persistent gnawing on the outside of the house. My dad went to investigate. His flashlight beam revealed a large porcupine with black, beady eyes. My father scared it away, but it returned other nights.

Why would a porcupine chew on a house? It’s not so much the wood they’re after; it’s the finish. Most paints, stains, and wood glues contain salt. And porcupines crave it, just as we humans crave potato chips and roasted peanuts.

A porcupine’s yen for salt kicks in as they transition from a winter to a spring diet. During winter, porcupines become somewhat sedentary, holing up in rock caves, hollow logs, or abandoned buildings, and making only short forays from their dens to feed on the inner bark of trees; hemlock and white pine are favorites. Porcupines are able to extract nutrients from this low-quality food because of their large caecum, a sac at the junction of the small and large intestines. The caecum contains digestive bacteria that ferment the finely ground plant fiber so the body can absorb it. Even with this special ability to use bark for food, the animals lose weight in winter.

As spring warms the forest, a porcupine’s diet and behavior change rapidly. The animals spend much of their time in trees feasting on swollen buds. They chew off a branch and hold it with their forepaws while they nip off the buds. You can find these “nip-twigs” littering the ground below a porcupine feeding tree. When the vegetation returns, porcupines will often leave the trees to feed on the ground. Grasses, clover, violets, dandelions, and raspberry leaves and canes are favorite foods. 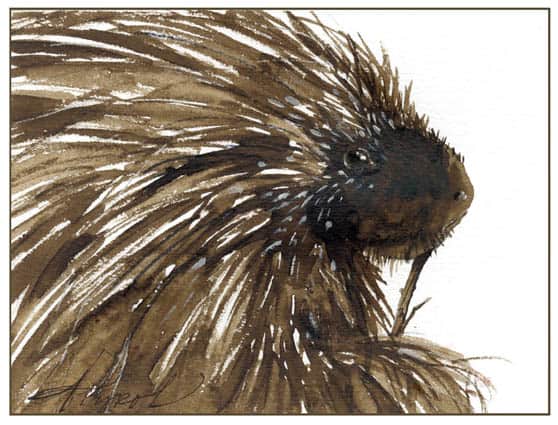 All this spring and early summer feasting leads to rapid weight gain, but also a sodium deficiency. Green plants are low in sodium and high in potassium. According to Uldis Roze, author of “The North American Porcupine,” porcupines and other herbivores need both sodium and potassium to activate nerves and muscles, but must maintain a 1:1 ratio of these two ions. If the amount of potassium significantly exceeds the amount of sodium, the animal can die. Plants contain potassium to sodium ratios as high as 500:1. So porcupines feeding on green vegetation must excrete excess potassium and seek out salt. For the same reason, other herbivores like moose and snowshoe hare often congregate at roadsides in spring to feed on salt left over from the winter.

Roze has studied porcupines extensively in the Catskills. In one experiment, he attached salt-impregnated wooden pegs to a cabin, then observed porcupines through the windows as they came to chew on the wood on night: “I felt trapped inside a bass viol as the house vibrated under their powerful teeth. This was porcupine music, the sound of the wood saws.”

Roze discovered that porcupines preferred the wooden pegs with the highest concentrations of sodium. When he added potassium, they chose pegs with the most balanced sodium to potassium ratios. In his study, females came to the cabin in search of salt more often than males. He attributed this to hormones associated with pregnancy and lactation, which prompt a craving for salt; nursing mothers lose sodium in their milk.

Roze observed the rate of salt-feeding by his porcupines peak in May and June, with a second minor peak in August and September, when they were feeding on large numbers of apples. Apples are acidic, impairing sodium resorption in the kidney and causing the animals to lose sodium in their urine. The salt drive dissipates in winter, when the animals are less mobile and get by on sodium that’s stored in their caecum.

Before plywood outhouses and sweaty axe handles were available for porcupines to chew on, where did they find salt? Early naturalists observed the animals swimming to reach yellow pond lilies and other aquatic plants, and even quarreling over the sodium-rich leaves. Porcupines eat mud at natural salt licks along riverbanks and gnaw on fresh bones in animal carcasses, which contain both sodium and calcium.

So if a mother porcupine begins to chew on the salty handle of your favorite canoe paddle, perhaps you’ll be more sympathetic – and remember to put it out of the animal’s reach.

Susan Shea is a naturalist, conservationist, and freelance writer who lives in Brookfield, Vt. The illustration for this column was drawn by Adelaide Tyrol. The Outside Story is assigned and edited by Northern Woodlands magazine, and sponsored by the Wellborn Ecology Fund of New Hampshire Charitable Foundation: [email protected]