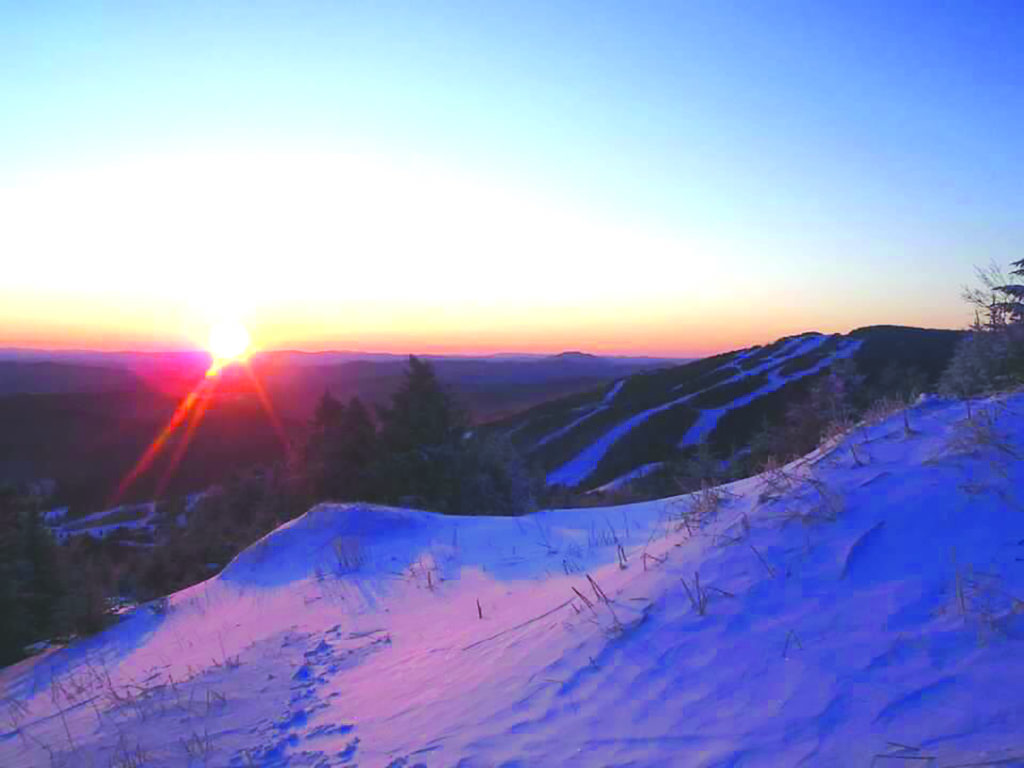 It was still dark as we left the parking lot, and my beloved golden retreiver, Vespi, and I made our way toward our own little piece of heaven. As the sun ascended, so did we. It was a stunning morning, with the sky crisp and clear as it slowly turned from black to the striking pinks of the sunrise. On the open skin track, the wind was bitter cold, nipping at my behind through my pants as we skinned our way up the mountain. It wasn’t excitement that kept us moving, but the fact that I should have worn my thicker long-johns in the 17-degree weather.

Looking at the frozen icicles dripping from her mouth, I bet Vespi was wishing she had been willing to wear her little puppy booties this morning. But when we bought them for her several years ago, she had immediately gone outside and buried all four deep in the snow, never to be seen or heard from again.

So, instead of booties, she would stop and raise a paw about 10 minutes in, waiting for me to apply a protective goop if she felt the conditions warranted.

Like many skiers, she much preferred to feel the snow underneath her paws, which had been toughened during her 13 years of adventuring. And I trusted her judgement as she broke trail, leading us up the mountain.

As we ducked into the woods for the final ascent, I lost sight of my skis underneath the snow. This was going to be a gooood morning.

The radar had called for no new snow last night, but I have learned the best weather report is to just look outside your window when the alarm goes off at 5:30 a.m. When I did, almost an entire foot of fluff had blanketed our little area of the Green Mountains. After what had felt like the longest drought, the Killington Cloud had spoken. Finally, winter had returned to us. And so Vespi and I found ourselves skinning up a mountain in the pre-dawn darkness.

Amidst the shadows of the backside, we meandered through the snow laden trees. We hugged the side of the great wide openings to preserve the powder for the next skier. As I followed Vespi, I ducked under low hanging branches that filled my hood with snow, and climbed across fallen trees that blocked our skin track. An almost eeire quiet penetrated the wilderness, marking a stark contrast to the variety of wildlife I had seen during the warm spring-like weather of the previous week. In the bitter cold of this powdery morning, however, there was not an animal track to be found. This morning’s snow would be all ours.

Coming up onto the summit, we crossed from the shadow into the light as the wind blasted us in the face and I saw Vespi’s ears blow backward. As the sun finally crested above the mountains, the snow began to glitter, showing off its champagne goodness. Vespi and I looked at each other, each of us wearing the exact same hungry expression. And then, without any notice, she bolted.  With grace and speed, she bounced her way down the trail, fluffy fresh snow flying above her head. I laughed for a minute at the golden retriever getting continuous face shots through the beautiful powder and then abruptly realized: my powder had just gotten snaked by a dog!