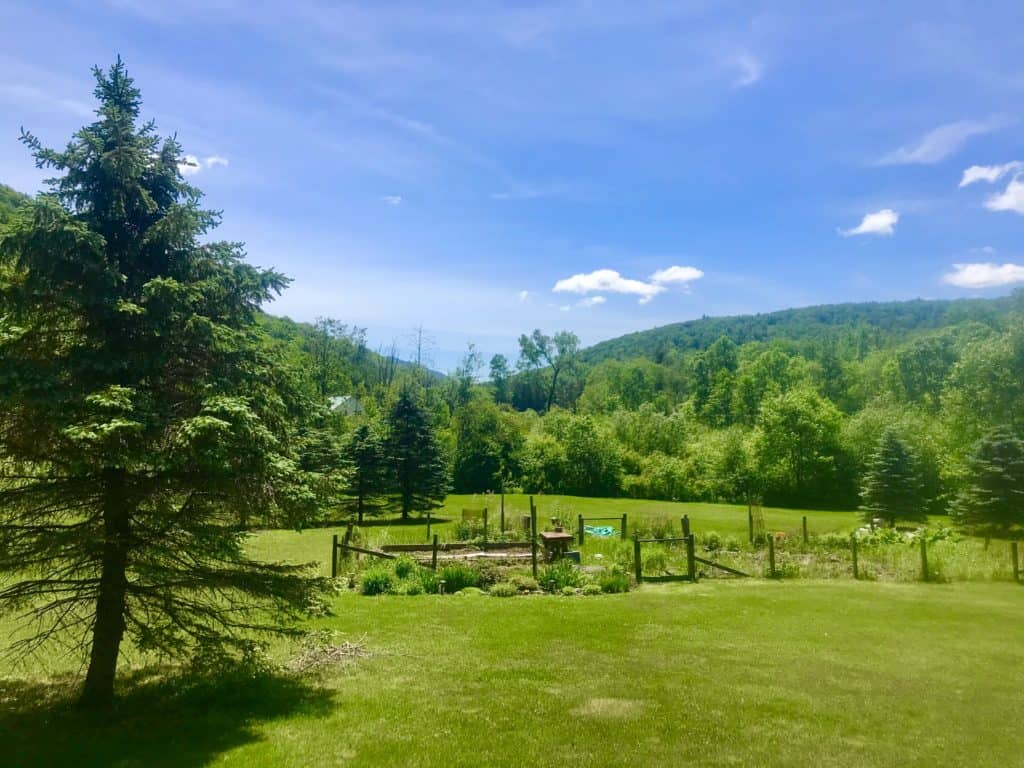 My grandfather called it “settin’.” The act of someone sitting on their front porch, presumably in a rickety old rocking chair passed down from generation to generation, just watching the world go by. Perhaps they would be fanning themselves and drinking a glass of sweet tea. They seem to be without a care in the world, taking a break from all the labor that the day might bring. Just rocking, enjoying the afternoon breeze and letting their mind wander as they “set” to watching the sun slowly make its way across the sky.

I’ve been doing a lot of settin’ over the past few weeks, watching my garden grow and the flowers bloom while trying not to itch this bright purple cast that goes from my fingers to my armpit. And while I don’t have a rocking chair or a glass of sweet tea, I do have a nice cushy chair with a well appreciated footrest, some sweet-smelling homegrown and a pint of good ole Vermont cider with which to pass the time. From my porch, I look southeast down the river valley for a few miles, studying the lines of the mountain ranges and the many shades of green which paint them. More often than not, the Vermont breeze coming down those mountains means that instead of a fan, I need a hoodie and a blanket to keep me from freezing. But that just keeps the black flies away.

Even as we have all begun to seek adventures outside of our designated 10 mile radius, the porch has become the outdoor living room once again. We sit on our porches, awaiting visitors or deliveries. At first, those friends came through FaceTime or Zoom, awkward conversations spent comparing ski tours. Then, those same friends came to stand on the lawn, masked for a quick visit and celebrating the ability to just see someone. And then finally, to be able to spend an afternoon sitting next to my mom as we talked for hours.

While the porch is a peaceful spot, where I can watch our beautiful Green Mountains turn green, it is also my thoughtful spot. I can set for a bit with a book to escape from the world or read the news to dive right into it. And it was where I set, silent, for 8 minutes and 46 seconds. At first, it was the same. I heard the robins chirping as they bounced along, searching for food. I felt the wind as it flittered along on this hot day. I took a deep breath to smell the fresh Vermont air and realized that I COULD breathe…

My grandfather was born and raised in Georgia, son to the local sheriff: “a gun-toting, donkey riding, son of a b*tch,” he would say. My grandfather was the complete opposite: a jovial and caring man named Smiley, who served with honor in both the U.S. Army and Navy in World War II before protecting and serving as a police lieutenant in the small New Jersey town where he raised his family. A community cop who was called in to the Newark Riots in 1967 while his wife and daughter set on their front porch, holding hands in silence, praying for him to come home. A man who raised his family to stand up against injustice and to do what was right. A man who taught his family that black lives do matter. A man who taught his family that we should listen, watch and learn from all that we see, hear and read to become a better nation, a better police force and a better people.

As my mom and I set and shared stories of what he had taught us, I remembered my first front porch memory. It was the early 1980s and I was a little girl, settin’ on the concrete stairs leaning against their brick house while my grandfather set on his blue and white loveseat smoking his favorite pipe. Together, we would set for hours. Just him and me. He would tell stories and I would listen, learning about the world as we drank sweet tea and watching his treasured peach tree try growing up north. And in the center of that lawn, on what I believed was the tallest flagpole in the world, proudly flew the American flag.

And I believe, deep in my heart, that my grandfather would have joined me on one knee in front of that flag to pray for our country. For 8 minutes and 46 seconds.