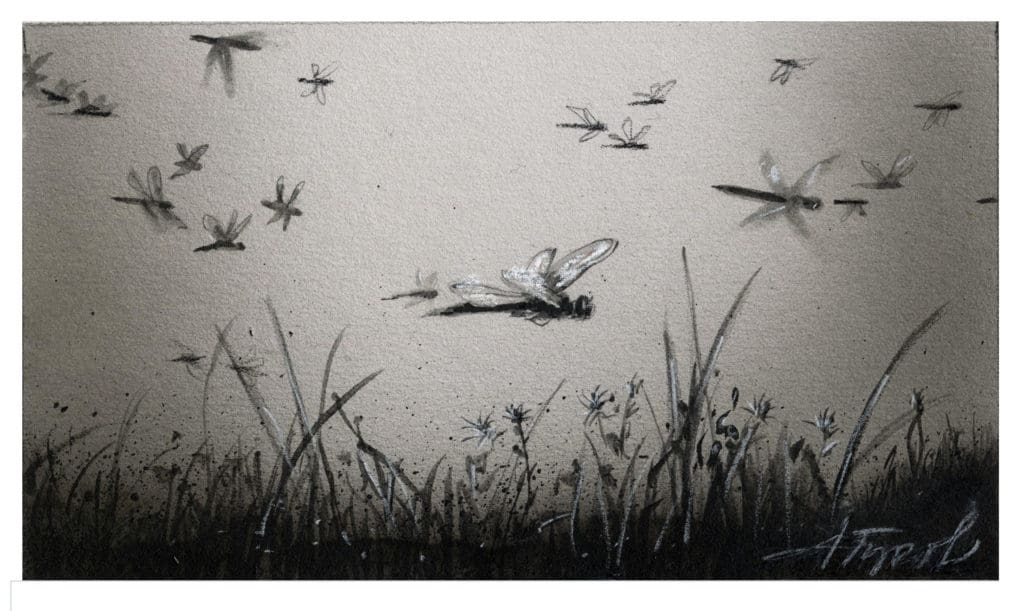 Sitting in a grassy field at Townshend State Park on a late summer day, I watched dozens of dragonflies roaming the sky. Their slender bodies drifted in and out of view as they rode the air currents. I thought of the cool autumn days to come and wondered where these dragonflies would go.

Turns out, people have been asking this question for a long time, and researchers don’t yet fully understand the intricacies of dragonfly migration. Dragonflies migrate across every continent except Antarctica, and there are at least 16 migrant species in North America.

The best-known of these is the common green darner, Anax junius. Green darners are exceptionally large, for dragonflies – they measure about 3 inches long, with a matching wingspan. Researchers have discovered dragonflies of this species travel, on average, just over 370 miles in migration, with some individuals covering more than 1,500 miles.

The Vermont Center for Ecostudies was part of a collaborative research project studying dragonfly migration over several years. The team drew on 21 years of data compiled from citizen science, studied dragonflies caught in the wild, and examined museum specimens, including some that were over 140 years old. By analyzing the chemistry of more than 800 dragonfly wings, the researchers were able to determine where each dragonfly started its life. The information revealed a three-generational cycle of green darner migration.

The first generation emerges in the southern United States, Mexico, and the Caribbean. This generation travels hundreds of miles north by May. The second, northern generation reaches maturity between July and October. These dragonflies reverse the path of their parents, migrating back south to lay eggs.

The third generation emerges in the South and is non-migratory, going through the entire life cycle in one place. The dragonfly offspring of this third generation begin the first-generational cycle again. Somehow, these emerged nymphs will grow and know to make their way north along coasts, lake shores, and mountain ridges. This northward migration seems to be triggered, at least in part, by an air temperature of 48 degrees.

Another notable dragonfly migrant sometimes spotted in New England is the wandering glider (Pantala flavescens). This yellowish-orange dragonfly with red eyes measures 2 inches in length and 3 inches in wingspan. The wandering glider is the global insect long-distance champion and has been found from Texas to eastern Canada and as far afield as Japan, India, and South America. Some Eastern Hemisphere species cross the Indian Ocean and may migrate more than 11,000 miles in search of pools to lay their eggs. The larger surface of their wings enables wandering gliders to ride prevailing winds at altitudes of more than 3,000 feet. They feed on tiny airborne plankton along the way as they stroke, stroke, stroke and then glide for long periods, expending minimal energy.

Dragonflies are exceptional aerialists and are able to hover, dive, fly backwards or upside down, and reach speeds of up to 30 mph. Each of their four wings acts independently, meaning a dragonfly can be missing one wing and still carry on. It’s likely that you’ve seen dragonfly migration action, even if you weren’t aware what the insects were doing. Green darners and other dragonflies don’t fly solo – they swarm, just as they will do when there is a hatch of flies or other appealing food source.

Bryan Pfeiffer, president of the Dragonfly Society of the Americas, has swung his net in parking lots from Montpelier to Michigan in a quest to study dragonfly behavior. “As killing frosts encroach, we start to see migrating swarms,” he said. “In the fall some of these dragonflies move to the edge of the continent.” Along New England coastlines, there are autumnal “streams of dragonflies” making their way south.

If you’re lucky enough to see an autumn swarm of dazzling dragonflies and would like to contribute to the citizen science effort to learn more about their migration, you may submit your findings at odonatacentral.org. It’s not a bad way to spend some time on a warm fall day: grab a blanket and find a patch of meadow near a water source with forests around. Then look to the sky and watch for these winged wonders.

Tiffany Soukup is a writer, photographer, park manager with Vermont State Parks, and traveler. Illustration by Adelaide Murphy Tyrol. The Outside Story is assigned and edited by Northern Woodlands magazine and sponsored by the Wellborn Ecology Fund of the New Hampshire Charitable Foundation: nhcf.org.