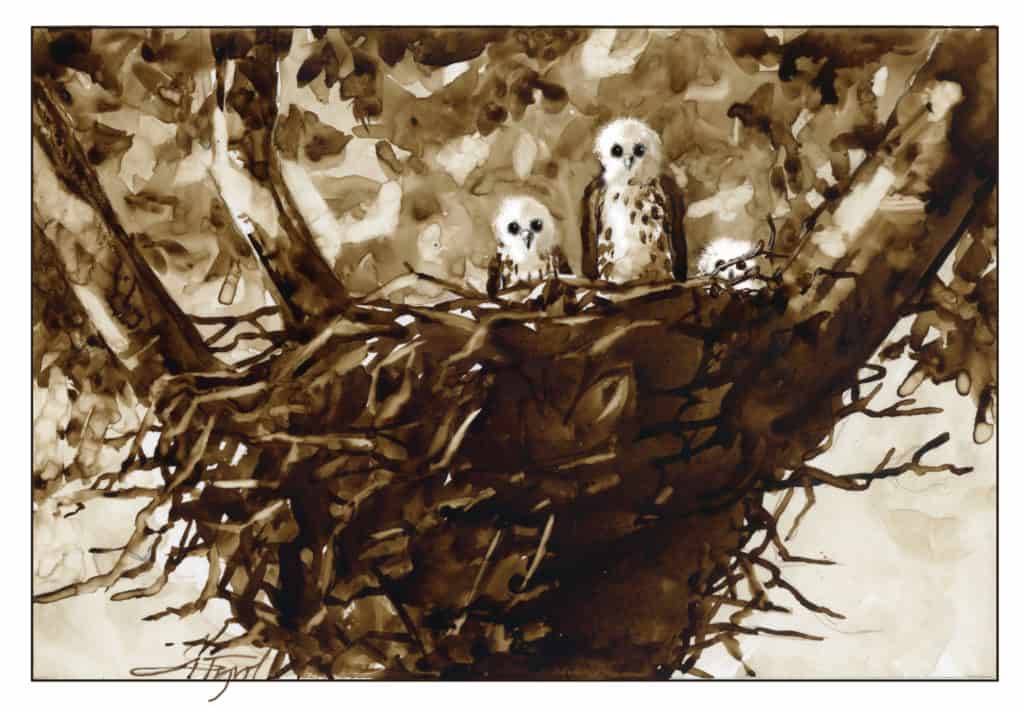 Each fall, thousands of broad-winged hawks soar across the New England sky in flocks known as kettles, on their way to wintering grounds in South and Central America. The sky swirls with hawks bubbling up on thermals of hot air and then streaming southward. It is enough to take your breath away – all those raptors, more than you could imagine seeing in a lifetime, coursing across one stretch of sky together.

Although there are more than 1.7 million broad-winged hawks across the Americas, there is much unknown about these small woodland raptors, said Rebecca McCabe, a research associate from Hawk Mountain Sanctuary in Pennsylvania. To learn more about broad-winged hawks, including where they go and what they do after then fly away each fall, Hawk Mountain and the Harris Center for Conservation Education in Hancock, New Hampshire, are collaborating to study the hawks.

Broad-winged hawks return in mid-April to the places they left behind in the fall, with breeding populations across the U.S. and much of Canada. Through the study, McCabe and her colleagues hope to learn if these hawks also show site fidelity to their migratory stopover places and wintering grounds. This information could have a profound impact on the future management and conservation of this species.

These hawks build their nests at least half a mile from the nests of other broad-winged hawks and actively defend their nesting real estate from other raptors, including northern harriers and red-tailed and red-shouldered hawks. Broad-winged hawks tend to build nests in deciduous trees around the first main crotch, or atop a whirl of branches close to the trunk in conifers. They will occasionally use the same nests from a previous year or renovate nests of other species, although they usually build a new nest each spring.

The female is the main nest builder, though she is often assisted by the male, and both bring dead sticks to construct the a rather small, messy platform-style nest, about 15 to 17 inches across and 5 to 12 inches high on the outside. It will take the pair two to four weeks to complete the nest. Tucked inside is the nest cup, built exclusively by the female, who lines a cradle-like depression with bark, wood chips, and sprigs of fresh green plants. Here, the female will lay up to five eggs, smaller than the average jumbo chicken egg, and incubate these for 28 to 31 days. The male supports the female by bringing her food and actively defending the nest.

The chicks generally hatch in mid-June and are covered in a thick coat of white and gray downy feathers. During the first week or two, the female stays with the nestlings, tending to them and protecting them while the male continues to supply the food for the family. After that it will take both the male and female, working together, to feed their growing babies an array of prey from insects and amphibians to small mammals and other birds. The hatchlings can hop out to the edges of their nest and surrounding branches within five weeks of hatching and will be flying on their own and learning to hunt by the middle of summer.

Although not much bigger than pigeons, broad-winged hawk parents are fiercely protective, guarding the nest from raiders like great horned owls, raccoons, crows, ravens and even porcupines. Adult hawks will swoop and attack animals, including humans, if they perceive the nest is in danger.

Hawks are secretive and unobtrusive while in the vicinity of their nests, although they may be spotted soaring above the landscape of their territory and are often revealed by their distinctive high-pitched whistling call. They spend much of their day in the mid-canopy level of interior deciduous or mixed forests, perched on branches, searching for prey.

While the hawk study, like so many other things, has been put on hold this year, McCabe and other researchers plan to resume their efforts next year. They hope to locate active broad-winged hawk nests on the Harris Center’s 23,000 acres of conserved land, and outfit some of the birds with satellite tracking tags. The data collected from the tag would give the scientists a snapshot of the migration habits of this forest raptor.

McCabe feels an urgency to find out the secrets of the broad-winged hawk and to help ensure these raptors continue to raise their young deep in our woodland forests, and fill our skies on bright autumn days.

Susie Spikol is the community program director for the Harris Center for Conservation Education in Hancock, New Hampshire. The illustration for this column was drawn by Adelaide Tyrol. The Outside Story is assigned and edited by Northern Woodlands magazine and sponsored by the Wellborn Ecology Fund of New Hampshire Charitable Foundation: nhcf.org.