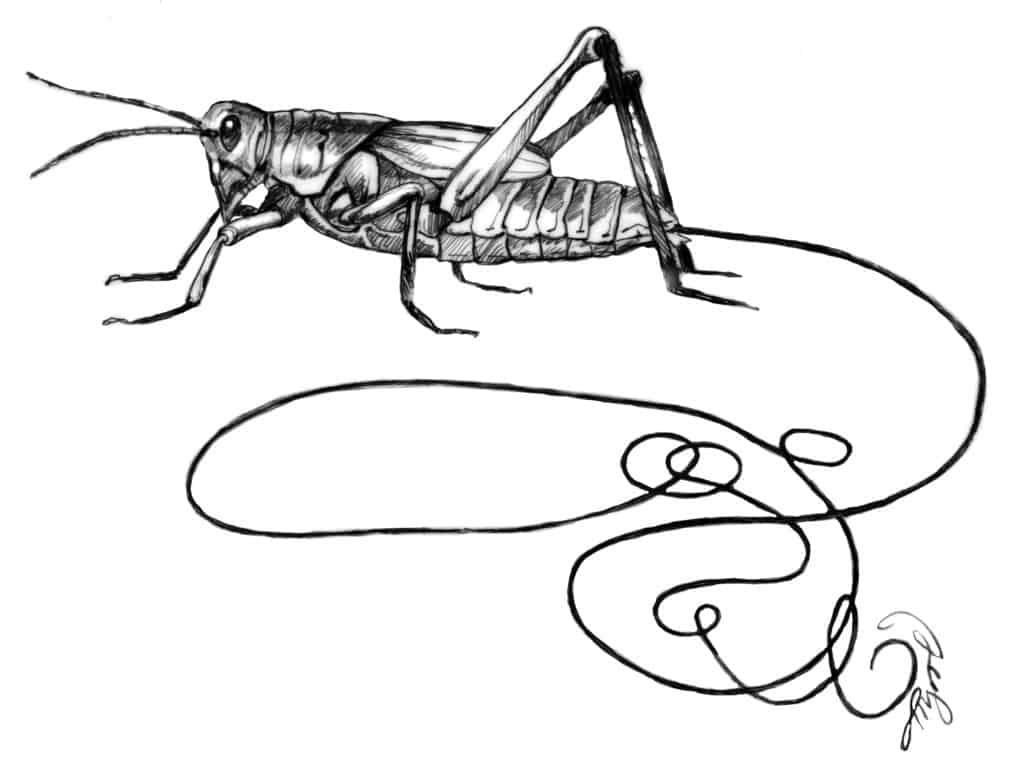 Some of my favorite children’s books describe life cycles as heroic tales of persistence and redemption. From “The Ugly Duckling” to “The Very Hungry Caterpillar” to “A Seed is Sleeping,” these stories have brought the miracles of growth and maturation to life for generations of readers. I can’t say, however, that I know of a single children’s book describing the impressive hero’s journey of Nematomorpha, commonly known as horsehair worms.

These curious creatures earned their name because they are sometimes found in watering troughs and were once believed to be horsehairs that became animated. Many insects might well be very pleased if this were true.

The improbable details of the horsehair worm’s life cycles are as convoluted as they are gruesome. Horsehair worms begin life as strands of gelatinous eggs in aquatic habitats including streams, lakes, puddles – and, yes, horse troughs. After hatching, the larvae, scarcely as large around as the thickness of a page, remain on pond and river floors until they are eaten by something else. While creatures from fish to stoneflies accidentally ingest these larvae, not all hosts are equal when it comes to horsehair worm survival.

Once inside this first host, the larva burrows through the digestive tract into the host organism’s body and forms a resting cyst. Two planets must align for success of the cyst’s next life stage. First, the host must be inside an insect; if the cyst ends up in a fish, snail, crayfish, or some other non-insect being, it is doomed. Second, the cyst must survive the host insect’s immune defenses; some hosts wrap the cysts in compounds that can kill them.

Should a cyst survive, the next leg of the journey takes it out of the water. Aquatic insects emerge from water to reproduce, and horsehair worm cysts stow away for the trip. Exiting the water comes with its own hazards, for both insect and passenger; hungry fish may well dine on the paired travelers, at which point the horsehair worm cyst is just a fish food morsel. Many female aquatic insects return to water to lay eggs, a journey that can be as hazardous as was the exit. For a horsehair worm, a host insect’s successful return to water spells death.

Many aquatic insects, however, live their final hours on dry land, where their bodies eventually become scavenger fodder. This is where the horsehair worm’s path takes a more gruesome turn. Once again, not just any scavenger will do. Horsehair worms favor specific hosts that seem particularly susceptible to the worm’s brand of mind control, including crickets, cockroaches, and beetles. There’s nothing a cyst in a dead mayfly, caddisfly, or dragonfly can do to ensure it is eaten by a favored host. But when cysts are consumed by the right insect, they set about coopting the host’s resources – and eventually its free will.

Ingested cysts enter a distinctly worm-like life stage and grow rapidly, nearly filling their host’s abdominal cavity. After reaching their full size, the worms release chemical messengers that seem to scream “dive and swim.” Otherwise sensible terrestrial insects that would have spent their entire lives on dry land are suddenly possessed by an irrepressible urge to swim like Michael Phelps.

Once their hosts are dunked, the worms emerge into the water via holes they poke through the host’s body wall. Adult worms can measure four inches, uncoiled, and resemble a fine leather shoelace. Once in the water, they mate and lay their eggs. Surprisingly, some host crickets and cockroaches survive this bizarre infestation, scramble ashore, go on to feed and even reproduce.

One might ask how a simple worm could possibly survive plot twists worthy of a Tolkien tale and then repeat the process generation after generation without interruption. The answer comes down to a common strategy among parasites: strength in very large numbers. Horsehair worms lay millions of eggs, and the larvae are often the most common life form on the floors of aquatic habitats. By overwhelming the odds with extraordinarily large numbers, horsehair worms successfully produce enough offspring to keep these fascinatingly macabre animals around.

And so, if you happen to glimpse what appears to be a swimming pencil lead, or perhaps a Gordian Knot-like tangle of such worms, in your dog’s dish – or, more alarmingly, in your toilet bowl (it happens) – have no fear. Just look around for a rather damp and slightly confused cricket. What a tale they’d have to tell!

Declan McCabe teaches biology at Saint Michael’s College. His work with student researchers on insect communities is funded by Vermont EPSCoR’s Grant NSF EPS Award #1556770 from the National Science Foundation. The illustration for this column was drawn by Adelaide Tyrol. The Outside Story is assigned and edited by Northern Woodlands magazine and sponsored by the Wellborn Ecology Fund of New Hampshire Charitable Foundation: nhcf.org.