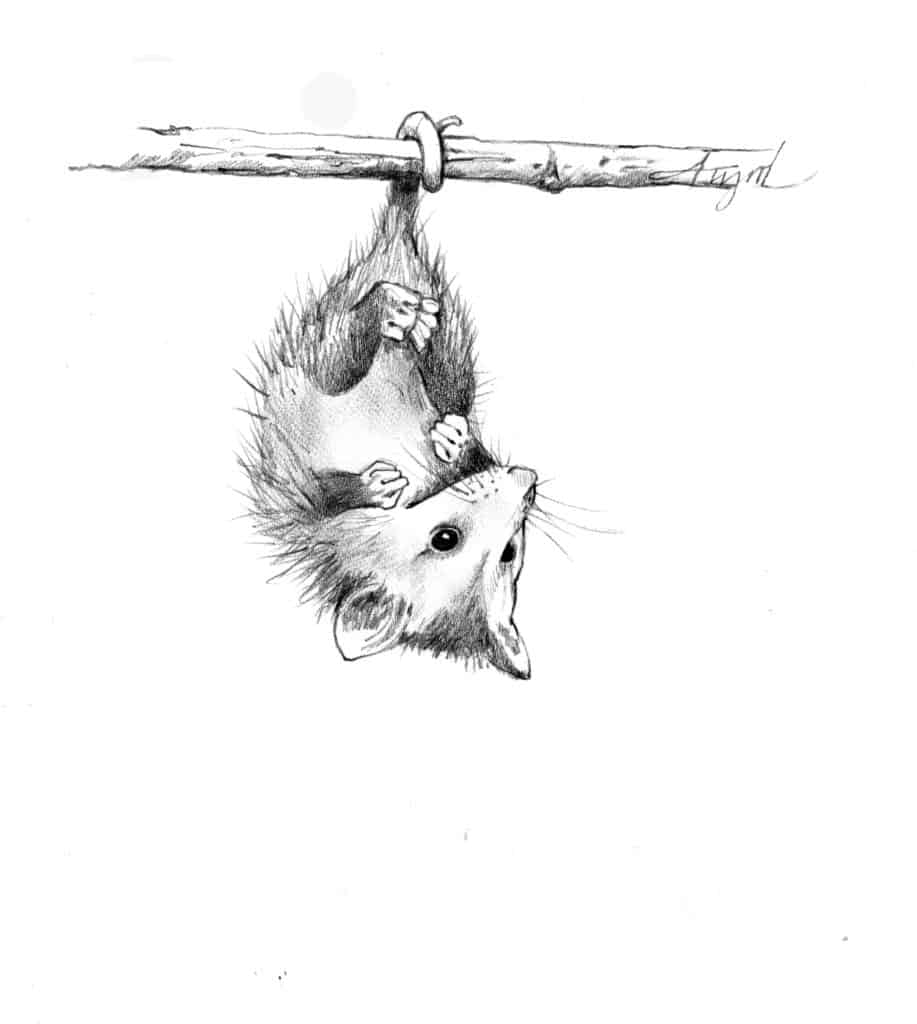 Anyone who has shared a home with a dog or a cat has learned something about the silent language of tails. Wild and domesticated animals may use tails for everything from communication to courtship, balance to locomotion, and defense to swatting flies. Tails can range from short to long and be furry, feathered, or naked.

A dog’s easy tail wag expresses friendliness, while a tucked tail shows subservience. Fear or aggression is a tail curled down. A high and tense tail signals alpha status; best to “high-tail it out of there.” On the other hand, a cat says hello by holding its tail straight up. A tail of fear is puffed up and held erect (think Halloween cat). Sleeping cats move their tails when dreaming. A friendly cat rubbing against your leg is using scent from glands at the base of its tail to mark you as its property. Most owners can relate to this typical cattitude.

Wild felids (like bobcats and lynx), and canids (like foxes and coyotes), also have scent glands on the upper surface of their tails. The same muscles that cause fur to stand erect squeeze an odoriferous protein compound onto the surface of the skin. Animals use this scent to communicate information from territory boundaries to readiness to mate. These glands are the source, for example, of the musky odor red and gray foxes leave in the woods during mating season.

Many other animals use their tails to communicate in other ways. Everyone knows to run when a skunk raises its tail to warn of an impending spray, and that a rattlesnake’s ominous tail rattle portends a venomous bite. Foxes and white-tailed deer use their tails to signal danger; a deer’s brown tail flashes its white underside as an alert. Beavers announce a threat with a loud tail slap on the water’s surface – and they store fat reserves in their tails for winter.

Other tails serve functions beyond communication, too. A raccoon’s banding acts as camouflage by breaking up the long visual profile of its tail. The long, bushy tails of foxes and gray squirrels enable these winter-active critters to curl up and wrap themselves in a cozy, insulating blanket. Chipmunks, however, sleep most of the winter in a state of torpor, hiding deep in their burrows 10 to 30 feet below ground. Their cute, 3- to 5-inch tails are not luxuriantly furred and don’t play a crucial role as insulation.

Some tails serve as a kind of fifth limb. Foxes use their tails for balance when running and as a counterbalance when pouncing on prey. Whales, otters, and fish undulate their tails for propulsion. Prehensile tails, such as those found on monkeys, opossums, and pangolins (scaly relatives of anteaters), enable animals to grasp branches and hang from trees. The opossum’s tail may be naked and rough so that it can get a good grip.

Lacking a tail appendage, birds employ tail feathers for everything from aerial maneuvering to elaborate courtship rituals, such as the luxuriant fantail display of the wild turkey. The extra stiff tail feathers of woodpeckers act as a prop that keeps them upright when perched vertically on a tree trunk.

Although we humans have lost our tails, the coccyx – or “tailbone” – remains. A vestigial tail at the end of our spine, the coccyx is composed of three to five fused vertebrae and helps us to stay upright when seated.

But why are the tails of some wild animals, such as the bobcat and lynx, barely there? Scientists postulate that ancestral bobcats experienced a genetic anomaly during evolution that persisted through time, even though it didn’t hold any particular survival value. Or perhaps this solitary predator simply doesn’t need a long tail for nuanced communication.

Tails reveal something of the inner worlds of animals, and yet much about their furry flicks and silent sinuosity remains shrouded in mystery.

Michael J. Caduto is an author, ecologist, and storyteller who lives in Reading, Vermont. The illustration for this column was drawn by Adelaide Tyrol. The Outside Story is assigned and edited by Northern Woodlands magazine and sponsored by the Wellborn Ecology Fund of New Hampshire Charitable Foundation: nhcf.org.