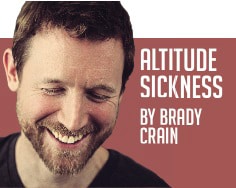 There is a magic that happens when everything goes right, and everything is going right. Not only has the snow been phenomenal, but this has been straight up one of the best, most important weeks of my adult life.

The icing, quite literally, was the skiing. Sunday was great, Monday was epic. Monday was one of the best ski days of my life, not because of the depth of the snow, but because of the crew with whom I rode (I usually ski alone). They were all less than half my age, and they were all tremendous skiers, and I was very surprised that I kept up with them well.

The day started beautifully, and went from there – dry, gorgeous powder, not too deep, but dense enough to feel deep and to cover most of the monsters waiting in hiding in the woods to kill my skis.

We started at Bear Mountain, catching some amazing powder turns, and eventually we went up to Killington Peak. We took Helter Skelter (which I haven’t been on in years – I always forget about that fantastic little trail). I was catching up to my younger friend (the rest of the crew were his friends), so I popped to the left of a tree at a breakneck clip and noticed, way too late, that it was a fairly large drop.

Screaming obscenities I dropped off it without slowing and stuck the powdery landing perfectly, stopping to look back, because I had done something I never would have done on purpose, especially having had back surgery last year. It was consequence-free, by the way, a perfect landing: soft underfoot, tight core (my free heels didn’t even lift), and when you’re going fast, the ground contact moment of inertia is spread out over square feet instead of swear inches, effectively reducing the force of the impact.

I stopped below the hit to look back admiringly at what I had done (it was somewhere in the 12 to 15 foot range from the takeoff to the landing I think, but memory exaggerates these things), and realized that there was a skier, also completely surprised, following hard on my heels. It is fortunate that he went a little bit to the left, because he would have landed directly on me. It turns out that he also had no idea what he was getting into (only having the warning of my yelled obscenities), and also stuck the landing perfectly, next to me.

This was one of the greatest ski moments of my life – realizing not only that I was good enough to do that without flopping on my face (landing a cliff on Telemark skis is a far different thing than on alpines, because the slightest imbalance can be fatal for upright delivery of a ski turn).

I even got a prop from one of the young guns, saying something to the basic tune of, “It can’t be easy to land something like that with a free heel.” It’s nice to be noticed.

From there we headed off into the skier’s right of The Light, which was tight and amazing, and we hit every piece of air on the way down, and there is some impressive air available around Flume and Lower Cascade if you know where to look. We did Dipper Woods a few times, then went back to Bear Mountain, where we caught even more powder, more big air, and just crushed it.

Tuesday was spectacular, and late Wednesday was super creamy in the woods, arguably the best skiing of the week. Once again dry and dense, it covered up any remaining imperfections in the woods. All of the woods were in excellent shape.

Thursday was epic, but way harder for me. I don’t know if this was because my legs were tired from skiing more than four hours a day for the whole week, or if it was because the snow was deep, windblown, and would suck the tips of your skis under if you let it. Obviously on Telemark skis, balance is a huge issue, and the snow was in between something that was comfortable in an Alpine turn and in a Telly turn.

I was exhausted by the end of my first run on Pico, which was amazing, but also incredibly, I skied out in three runs! I took a few runs at Pico, hiking up to the top of the Outlaw chair to get freshies (beautiful freshies).

I then shot over to Bear Mountain and caught the remainder of my legs over there. The woods on Bear were just phenomenal, but the high moisture content in the air and low moisture content in the snow meant that everywhere that was skied quickly turned from fluff to crud and was really hard to ski. So I called it a very successful week, and went home and took a nap.

Something else happened on Monday that is probably the most important event of my adult life, and certainly something that I have worked and striven toward for the last four years. I got news that caused me to sit in my car on the side of the road with tears in my eyes (happy tears, of course), and call my mother. I will have more on that in a couple of weeks, both because things are developing, and because I will be writing about skiing for at least the next week or so!