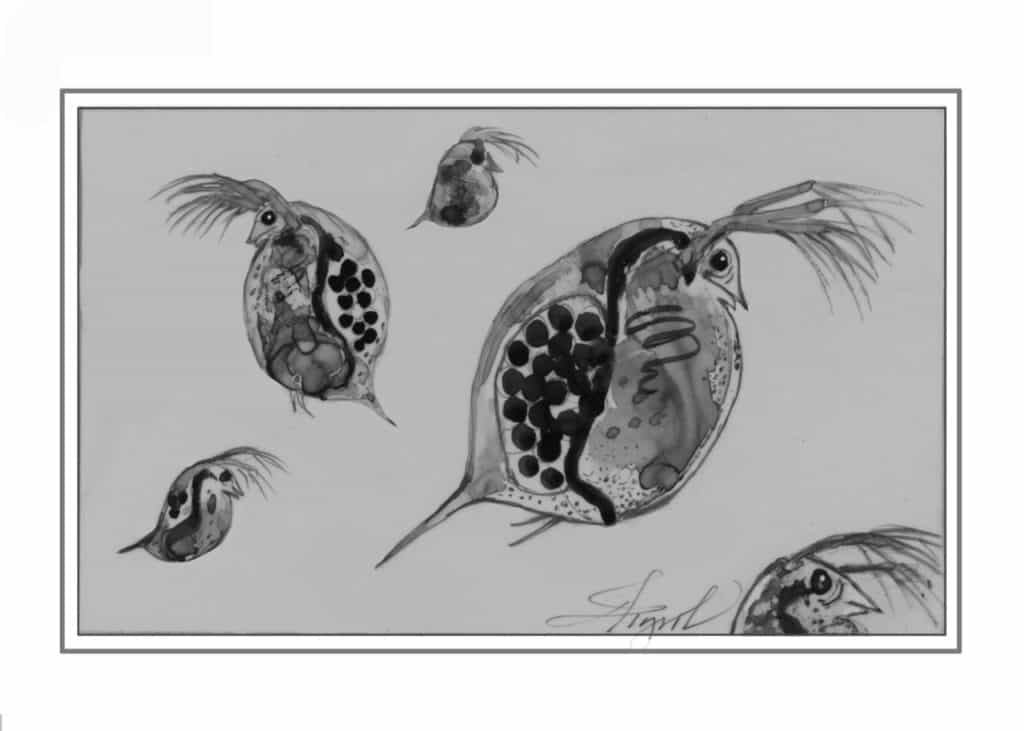 At this very moment, nestled into the sediment at the bottom of your nearest lake or pond, are Daphnia eggs – as many as 100,000 per square meter, according to one Michigan study. A genus of microscopic crustaceans, Daphnia are sometimes known as “water fleas,” and their eggs can remain viable for anywhere from several years to a century or more. This trait has earned them a position of prominence in a fascinating new field known as “resurrection ecology,” which aims to shed light on how ecosystems adapt to environmental change.

Mary Rogalski, an aquatic ecologist and assistant professor of biology and environmental studies at Bowdoin College in Maine, calls Daphnia “the cows of the lake ecosystem,” which is to say that they’re slow-moving, voracious grazers. Where cows feed on grass, Daphnia consume algae – and lots of it – helping to control algal blooms and preserve water clarity. Daphnia are, in turn, preyed upon by fish and a host of freshwater invertebrates.

Like many tiny organisms, Daphnia live life in the fast lane, reaching reproductive maturity in as few as 10 days. In the warmer months, when food is abundant and the living is easy, they reproduce by cloning themselves, producing 2-10 young every three days. As winter approaches and daylight wanes — or when confronted with other stressors, such as overcrowding, food scarcity, or pollution — they shift to sexual reproduction. Each Daphnia then produces two eggs, encased in a shell that looks a bit like a peapod, which initially float and stick to whatever crosses their path, including bird feathers, turtle shells, raccoon feet, and rubber boots. In this way, they can travel with herons or humans to new habitat.

Daphnia eggs that land in shallow waters along lake edges have the greatest exposure to light and warmth and are most likely to hatch the following spring. Eggs that settle in deeper water are eventually blanketed by sediment, which inhibits hatching. These sediment-shrouded eggs become part of the historical record of the lake, along with seeds, spores, pollen and, of interest to ecologists like Rogalski, heavy metals and other pollutants.

Every year, a new layer of sediment settles out. By collecting and analyzing sediment cores from undisturbed lake bottoms, scientists can construct a timeline of a lake’s environmental history, including periods of heavy herbicide use or metal contamination stemming from industrial activity. In addition, Daphnia eggs can be isolated, dated based on their position in the cores, and hatched or “resurrected” in the lab.

This is where things really get interesting. By culturing generations of Daphnia from different eras and exposing them to various environmental conditions, researchers can discern not just how modern-day Daphnia respond to those conditions, but also how Daphnia from other time periods respond.

Resurrection ecology is time-consuming work, and it doesn’t always pan out. Some lakes experience disruptions to the sediment record that prevent accurate dating. Pollution and acidification can degrade egg banks. And it’s difficult to assess pre-colonial impact, as the oldest eggs are the least likely to hatch. But when the stars align, this research can provide valuable insight into how species adapt – or don’t adapt – to everything from warming temperatures associated with climate change to increased cyanobacteria blooms resulting from industrial agriculture.

When Rogalski resurrected Daphnia dating back 50 to 75 years from three Connecticut lakes, for instance, she found something unexpected: rather than adapting to metal pollution over time, as might be expected, Daphnia have actually evolved to become more sensitive to metal contamination over the course of many generations. In other words, the ecological impact of such pollution extends well beyond the time when heavy metals were first introduced to these lakes.

“It’s hard for us to study the long-term impacts we have on ecosystems, but it’s really important,” Rogalski said. “These studies can surprise us. Maybe the things we’re seeing — like increasing sensitivity to pollution — are happening to more than just Daphnia, but it’s hard to study a hundred generations of frogs or of humans.”

Daphnia provide a living window into the lives of our lakes, each egg a tiny time capsule. Who knows what the next hundred generations might reveal?

Brett Amy Thelen is science director at the Harris Center for Conservation Education in Hancock, New Hampshire (harriscenter.org). Illustration by Adelaide Murphy Tyrol. The Outside Story is assigned and edited by Northern Woodlands magazine and sponsored by the Wellborn Ecology Fund of New Hampshire Charitable Foundation: nhcf.org.