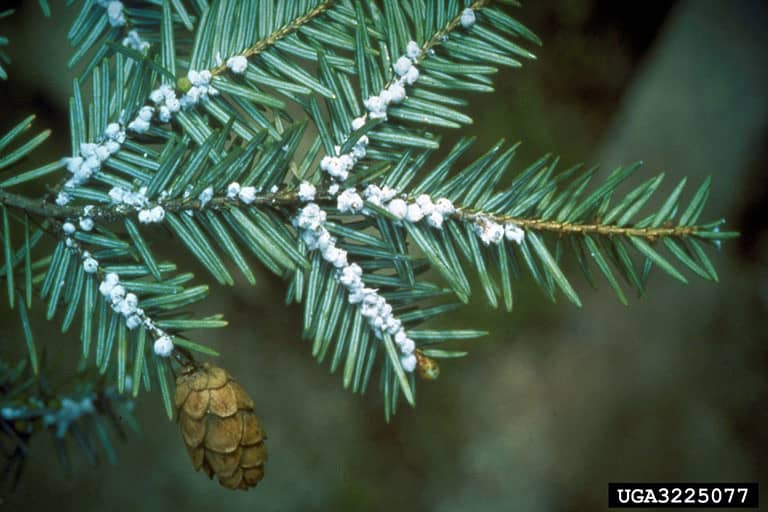 The problem with this article occurred earlier when my mind went searching for a photo of an ornamental hemlock tree growing in someone’s yard. I have a large collection of tree photos filed away in both my mind and computer available for a wide range of needs which requires that I only need to “think” of a tree and my mind will invariably tell me where one is located. For the first time in a long time the process failed me and, as it turns out, a very good reason exists for it. Ornamental hemlock trees largely do not exist in this area thanks to a 2003 Vermont Dept. of Agriculture quarantine against planting hemlock seedlings or nursery stock in Vermont if they came from an area infested with hemlock woolly adelgid and were moved to Vermont for planting. The quarantine was written to protect our Vermont hemlocks from this invasive insect which has decimated native Eastern hemlock forests throughout Connecticut, Massachusetts and most mid-Atlantic states. Infestations currently exist in Windsor, Windham, and Bennington counties as well.

This small insect attacks young hemlock branches by sucking out the sap which prevents tree growth, discolors and kills needles and branches, and lowers tree health and vigor. I first got exposed to it early in the quarantine process when I was part of a team tasked with physically removing and destroying a large number of infested ornamental hemlock from a property in Killington that had been brought in and planted from a quarantined area in another state.

Later I saw a large scale invasion of a forest stand at Black Rock State Forest near West Point, New York, where both the presence of the insect (they protect themselves by creating a white shell around them which look like small snowflakes) and the damage they cause to mature trees was evident.

There is hope for seeing hemlock growing in yards again thanks to nearly 20 years of research by Agricultural Research Service’s National Arboretum. A Kim Kaplin-authored news release in April announced “a first-of-its-kind hybrid hemlock” which is NOT vulnerable to the hemlock woolly adelgid. The article noted that the new tree variety, named “Traveler,” is a cross between Chinese hemlock and native Carolina hemlock (the mid-Atlantic version of our Eastern hemlock. It has hemlock’s soft delicate foliage, a weeping symmetry, larger than normal cone size, and a moderately slow growth rate. Since it must be reproduced asexually from cuttings, “a plant patent has been applied for and ARS is looking for commercial propagation partners to help bring this new plant to the nursery trade.” So while still a few years off there does now exist a hemlock variety capable of enhancing your yard and fully immune to attack by adelgid. If I perhaps missed a nice hemlock yard tree nearby let me know. My mind and computer will add it to my tree file.