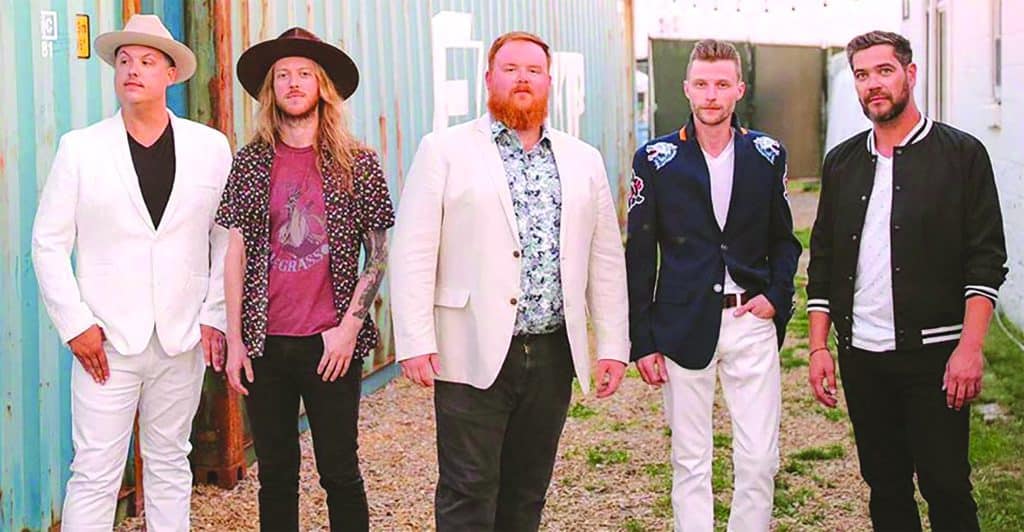 The Ghost of Paul Revere from Portland, Maine, makes its long awaited return to the Pickle Barrel this Thursday at 8 p.m., with Saints and Liars opening.

I’ve been looking forward to this show since it hit the calendar. I saw TGOPR for the first time a year ago and instantly became a fan. Saints and Liars are a great band, too. This is a show not to be missed.

I had the pleasure of speaking with Griffin Sherry (guitar, vocals) of TGOPR to learn more about them.

The band got its start eight years ago and has been touring nationally for the past five years. They have two full-length albums out, “Believe” and “Monarch.” They also have three EP’s out, “North” and “Field Notes” Vol. 1 and 2. Those are available on all the online platforms as well as physically, both in vinyl and CD. They’ll be releasing their third album very soon. You’ll hear some of those new songs at their show and on this tour.

The band calls their music “holler-folk” in the Americana genre. Sherry said, “We’re starting to push a little more into rock ‘n’ roll blues stuff and usually pretty high energy and vocal driven music. People tend to get into it. We have some pretty diehard fans, especially in New England so they know all the words. It’s kind of like a family affair, it’s nice.”

Sherry said five years ago they decided one day to buy a van and go for it. He added, “We got some notoriety playing around New England and were getting bigger and bigger. We booked our first tour nationwide and did 55 shows in 45 days. Since then we’ve just been hitting the road as much as possible and trying to play as much as possible. We haven’t really taken a break, we’ve just been working.”

Davis, McCarthy and Sherry have been friends since they were little kids. Sherry used to play a monthly three-hour show at a local bar in Portland and the other two would come and drink beer. One night they all got up on the stage and decided from there they would write some music and try it out.

Sherry said, “After we did one show like that, we stuck with it. That was kind of our first debut and then we started playing little shows around New England and within a year we released our first EP and sold out our first room in Portland.”

Those three are the primary songwriters but everyone contributes. Usually songs will be 80% done when presented and then the others will add their own flair to it. Sherry said, “We start playing them live and that’s when they start to grow and develop into what they become on the album.”

Their songs vary on subject matter. Some are personal songs. Their song, “Ballad of the 20th Maine” last year become the official state ballad of Maine and now is a historical song. A lot of people know them for their song, “San Antone,” which when played live tends to be really raucous.

Sherry said, “Two songs from the last record, ‘Wild Child’ and ‘Montreal’ hold a special place in my heart. People really love those songs, specifically ‘Little Bird’ which people usually come out for.”

Sherry got into songwriting, especially on acoustic guitar because of Led Zeppelin III. Some other musical influences are Pink Floyd, The Beatles, Crosby, Stills and Nash. He said, “I’m a big Tom Waits fan. He’s a big inspiration when it comes to song writing and song craft. He’s an American treasure for sure. We listen to everything. We all come with our own various musical tastes and they all incorporate themselves somehow.”

They’re currently in the midst of a New England tour but in March they’ll be embarking on a five week tour of Sweden, Denmark and Norway. Last year they were in Denmark and London, where their first show was, and they soldout the venue. They didn’t know what the response was going to be. Sherry said, “It was awesome. It turns out we have a lot of fans over there thanks to Spotify and that fun stuff. We’re really looking forward to this next run over there. Seems like everyone is pretty stoked to have us.” Sherry said that Europe fans are similar to New Englanders. They’re really attentive and take the time to listen to a song while it’s being played and then get excited after.

They’ll be announcing their summer festival tour soon. They’ve played many of the big ones like Mountain Jam and Newport Folk Festival. They even have their own, Ghost Land, in Portland, which they started six years ago. It happens every Labor Day weekend. For the first one they did everything themselves like raising the money, paying the bands and even parking cars. Now it’s grown to 3,000 people. They bring in other Maine bands they like to support.

Sherry loves that he gets to play songs he deeply cares about with some of his best friends. He added, “If you can distill it just down to that, the essence of that, then it’s always a good show.”