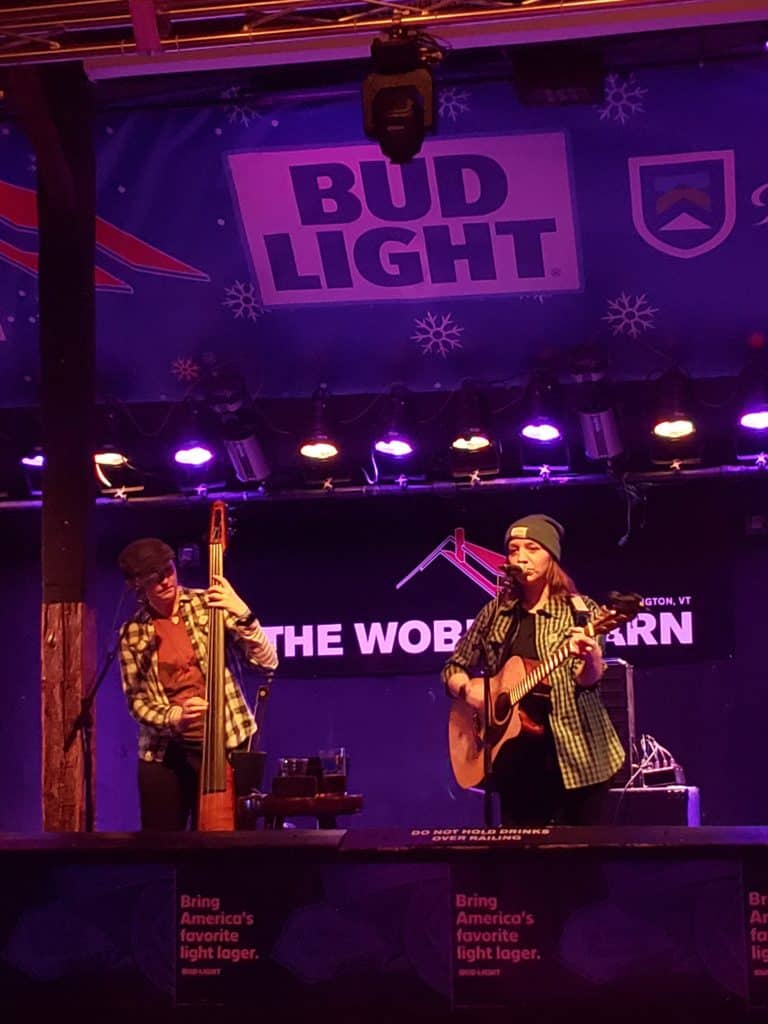 King Margo: Coats and Costa find their niche in Killington

There’s a new act in Killington: King Margo. After seeing them last Thursday at the Wobbly, I plan on seeing them every chance I get. Their harmonies are incredible and as local skier Paul Padfield said, “They sing like birds.” Their variety is great and they have fun, catchy originals. King Margo is Rachel Coats, 35, (upright bass, guitar, vocals) and Lucciana Costa, 31, (dobro, guitar, vocals).

They return to the Wobbly Feb. 20. They both enjoyed playing there and Costa said it was rowdy throughout the whole night. Check their schedule to see all the opportunities in February to see them, including every weekend at the Foundry. After that they head back to Nashville and won’t return until late spring.

Costa describes their duo as, “High energy, sarcastic folk rock.” They played a show in Colorado and arrived to see “Sarcastic Folk Rock” on the marquee. They both loved that and have been using it ever since.

Costa added, “We like to have a good time and in the process of us making sure we’re have a good time, everyone seems to gradually have a good time with us.” Coats said. “We try and take requests if we know it and if we don’t, we come back with something it reminds us of or a twenty second blurb of said song that we don’t know. We love to sprinkle in our originals, too.”

I told them in the interview that we’re a sarcastic match made in heaven. I was drawn to their sense of humor during their set. I saw on their website that after they met, they trusted each other immediately when they realized both their surnames were anagrams of TACOS.

They have one album out now, “Barely Getting By,” which you can find on all streaming platforms or buy at their show. They’re working on releasing some singles now and just recorded a live video in Nashville a few weeks ago that should be out soon. Costa said, “We’re kind of digging into our singer/songwriter side for album number two.” They both wrote, produced and recorded everything on their first album.

The original I enjoyed most was “Big Girl Cups,” which has a catchy sing-along chorus. Costa said, “That was written after a particularly bad day and crawling in bed with a bottle of wine. It was one of those pissed-off one-shot songs, I broke my phone, hurt my knee trying to jog in the morning (that’s my punishment for trying to jog in the morning). My bike was stolen off my balcony. It was just a bad day.”

They’ve only been a group since 2016 and met while filling in on another project. Coats said, “That project didn’t fit right with us but thankfully we were able to meet each other and decided to do our own thing.”

Their first gig together was in Ohio, which Coats said was an adventure. They did whatever covers they knew and an especially slowed down version of “Shots, Shots, Shots.”

That song has a special place in my heart, ask me about it sometime.

Coats is from Ohio and Costa, Michigan. They now call Killington and Nashville home. They both basically moved to Nashville on whims. Coats said Nashville is inspiring and Costa said it’s a great city. Coats said, “Killington, I’ll take most of the blame for but Lucianna benefits 1,000%. Lucianna never snowboarded before so it’s my fault for getting her into it.”

Coats was working with a touring musician in New England. They had a day off and the only Mountain open that Thanksgiving weekend (2018) was Killington Resort. Coats added, “New England for the win.”

Their first friend in town was Randy Elles from First Stop Board Barn. After renting with him that one time, Lucianna decided to buy a board. Lucianna said, “Hook, line and sinker everybody. We came back St. Patrick’s Day and that only further sold us on ‘we needed to be here.’ Killington is our spirit town.”

They fell in love with the town and the people so they bought a condo here last July. They didn’t expect to be playing in town so quickly but after closing on it, they went to Open Mic at Liquid Art and as Coats said, “Met some of the most amazing locals. They introduced us to various people who do the bookings in town. It’s been so crazy ever since. Shout out to Jenny Porter.” She let them play with her 1:30 a.m. at Jax. Tommy at Liquid Art was intricate in making it all happen. This is their first, of many, seasons playing in Killington. They’re also both Ambassadors for the mountain.

Coats said of playing music, “I love how you can be in your head, potentially having a shit night and you get off the stage and there was somebody out there listening to what you were doing that was really affected by the music you put out. That always turns my night around.” She added, “music is a way to genuinely connect with people. You can bypass all the other normal BS that people have between them. They feel something by the thing we pour our heart and soul into … It’s magic.”

“It really is,” agreed Costa, “Plus we get to drink and go to work.”

One comment on “Rockin the Region with King Margo”