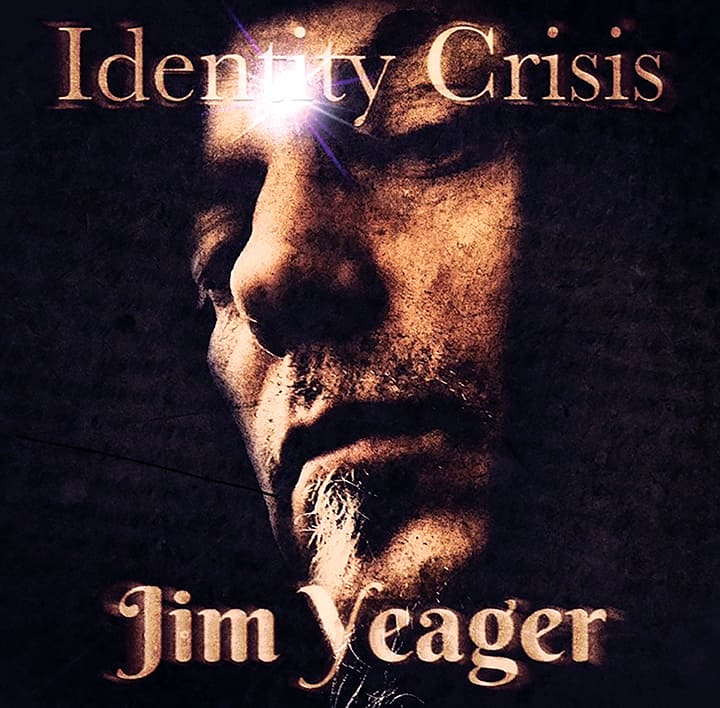 In this Covid-19 world we’re living in, sadly there are no music shows you can go to. But, you can catch many performers doing Facebook shows live with Venmo tipping so please support them when you can.

One of those performers, Jim Yeager, has his second solo record coming out on April 17. It’s aptly titled “Identity Crisis” and relates very well to the world we’re currently living in. Yeager said, “This is weird how it’s happening.” You’ll be able to get it on Bandcamp, Artistree when they reopen and at his shows (if there are shows in the world). He will be releasing three singles from the album on all the social platforms and I had the pleasure of previewing them.

Yeager has been writing for 30 years and started writing the songs for “Identity Crisis” in 2017 and recording them in October 2019. It was recorded at The Underground in Randolph and Würks Güde Stüdios in Hartland. It’s being mastered at Robot Dog Studios in Burlington.

Yeager said, “The interesting thing about these 10 songs is they were all written at different times, about different things. As I started seeing these songs come together and collecting songs for a record, I saw these songs had a theme to them. It’s hard to explain because I went through this weird spiritual awakening in 2018. That’s when these songs all came together and I realized this is supposed to happen. It’s a concept record.”

Most of the listings I have for Jim Yeager are in an acoustic setting so it was a welcome change hearing his first single, “Polarity.” It starts out really rocking. Yeager said it’s in-your-face heavy and I agree. His singing mixes well to make it a good rock and roll song. There’s some recorded talking at the end that gave it a cult of personality/Pink Floyd’s “The Wall” feel for me.

I interviewed Jim Yeager, 51, last October so I know he’s into classic rock and was a metalhead that shows here. Yeager said, “I grew up on classic rock like Led Zeppelin, Pink Floyd and all that stuff. I’ve always been wicked into music. I did my first professional gig when I was 17.”

Yeager said “Polarity” is about society being polarized. He added, “It’s this whole thing right now about left vs. right, blacks and whites, snowflakes and xenophobes. It’s also about being polarized from our own selves and losing who we are as people.”

Yeager just did his first Facebook live performance last week. He did a whole Pink Floyd set because he wanted to do something different than what he regularly does at his shows. Yeager said, “It was nice and people are pretty generous now.” He’s also a massage therapist, or was since that’s on hold too, but music is something he can’t survive without. He moved to Vermont 10 years ago and loves it. He currently lives in Woodstock.

“The whole record is going to be very different,” Yeager said. He added, “The first two are bangers and there’s really only one other on the record that’s close to being that heavy. It’s really all over the place.”

There are 10 tracks in total.

I really dig the second single, “Born With a Ladle.” It has a bit of a grunge rock feel to me.

Yeager started playing solo in the 90s and covers Nirvana. The song came from something his mom used to say to him. Yeager said, “She said I was born with a ladle in my hand. You really know how to stir the soup.” Something he knew I could relate to. He added, “It’s really about me having the power to do whatever I want. In the beginning of the song it says I can lead a horse to water and a pig to slaughter, all this mean stuff. As the song goes, it gets more light. It says together we can do this, we have the power. We’re stronger than we think we are.”

The third single, “Bow My Head,” is a mellower song that goes back to the acoustic side of him. I really liked his singing on this one. The song had me foot tapping along. It had a perfect blend of instruments and vocals.

Yeager said, “This one is about me going to everybody in my life that I’ve ever done wrong, or perceived to have done wrong. Me saying I’m honestly and truly sorry for what I’ve done wrong. I’m really doing it to let it go and let it go for myself, too. I bow my head to you. There’s no grudge, there’s no fight. I want to kind of be reborn from all this.” The guitarist on this song is guitarist Val McCallum from Jackson Browne. Yeager said, “We met through some people and we’re friends. We’ve jammed together a bunch of times. He’s been my guitar player and I’ve been his drummer.”

Other artists on the album are drummer Titien Tolbert, bassist Jeff Stedman and Steven Pixley on accordion.