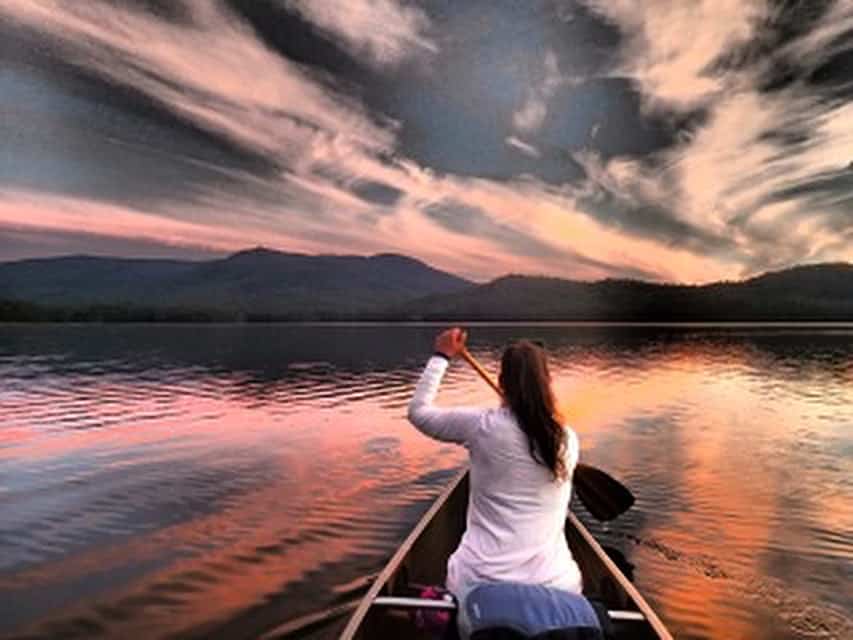 About three months ago, I was cocky and came into the Kent Pond parking lot a little too hot on my mountain bike. I felt my rear tire skid out as I hit the loose gravel but I was able to keep my bike upright … until my front tire decided to turn 90 degrees, stopping my bike dead in its tracks. I went flying over the handlebars, landing on my left arm and pretty much destroying it. A compound fracture in my ulna, protruding radius and torn wrist ligaments landed me in Rutland Regional Medical Center for four days and three surgeries in the middle of a pandemic.

It was supposed to be my first exploration of the new Gifford Woods bike trails and instead became my first ambulance ride. Not exactly my best day.

While the past three months have been a whirlwind of doctor visits, x-rays, recastings and therapies, my arm has decided it liked being in one piece. This past Wednesday, one month after having my final purple cast removed, my surgeon cleared me for paddle! Almost instantly, my body went from an anxious, tense mess to floating atop the highest clouds in the world and I practically skipped out of the Vermont Orthopedic Clinic. While I had been riding in the canoe for the past couple months, I had to wear this blue rubber cover, affectionately named my “Gumby Arm” to protect my cast from the water and even holding a paddle wasn’t an option.

But as I left the doctor’s office that day, all my thoughts were focused on that beautiful wooden paddle that every summer since my childhood has been a part of me. To catch the weight of the water in your shoulders as you pull the blade through to the finish of the stroke? How smooth that feeling can be when the water is like glass, so still under the heavy summer air? Or working the paddle side to side, manipulating the water to pull the boat closer to shore? It’s kind of similar to your skis working through the snow on any given day, but an extension of your arms rather than your legs.

I had missed this feeling so much and am so grateful that my boyfriend has been so willing to paddle me around in the canoe. Our regularly scheduled paddle explorations had come to a quick halt and instead, we spent our evenings floating around, eating Vermont charcuterie plates while we watched the sunset. I had even purchased my first fishing license since childhood and borrowed my father-in-law’s pole just so I could be doing something — anything — while I waited for my bones to fuse back together.  Once my cast was off, I even got back into swimming for the first time since I took my final jump off the lifeguard stand over 20 years ago.

To feel that smooth wood in my hands, to manipulate the blade through the water as the boat moved along Chittenden Reservoir that first night almost brought tears to my eyes. I was shaking a little as I made the first few strokes. Obviously, I had taken a few therapy strokes before I got a full release but those were meticulous and counter, more like physical therapy than the pure enjoyment of the water. I had needed to stretch the mangled muscles in my forearm and the lightest of paddle strokes had been perfect for just that movement.

But, oh it was just the perfect night. The clouds danced across the sky as we slowly made our way around the perimeter of the reservoir. Instead of floating, we were gliding and the canoe sliced through that perfect glass just like I remembered and my mind slipped into it’s paddle meditation where everything fades away and all you notice is the paddle, the canoe and the water. It’s transportive and peaceful, like that colicky baby that only stops crying and falls asleep when you’re driving the car. Even powder skiing doesn’t feel quite like this.

Once you find the right rhythm, there is no resistance and the boat seems to be flying through space and time. The colors of the sunset reflect in the water and you cannot tell where one begins and the other ends, just that you are somewhere in between the two and in the middle of mother nature’s magic. If you close your eyes, you could be anywhere, floating through space with all life problems simply lifting away from your body. It’s surreal, like being in a painting that just appears around you. Perhaps it’s the paddle strokes that call that sunset to wrap itself around you or maybe the strokes open a doorway to a new world. I don’t know.

But that first night back, as we paddled through the sunset and into the starry sky, I found myself again.