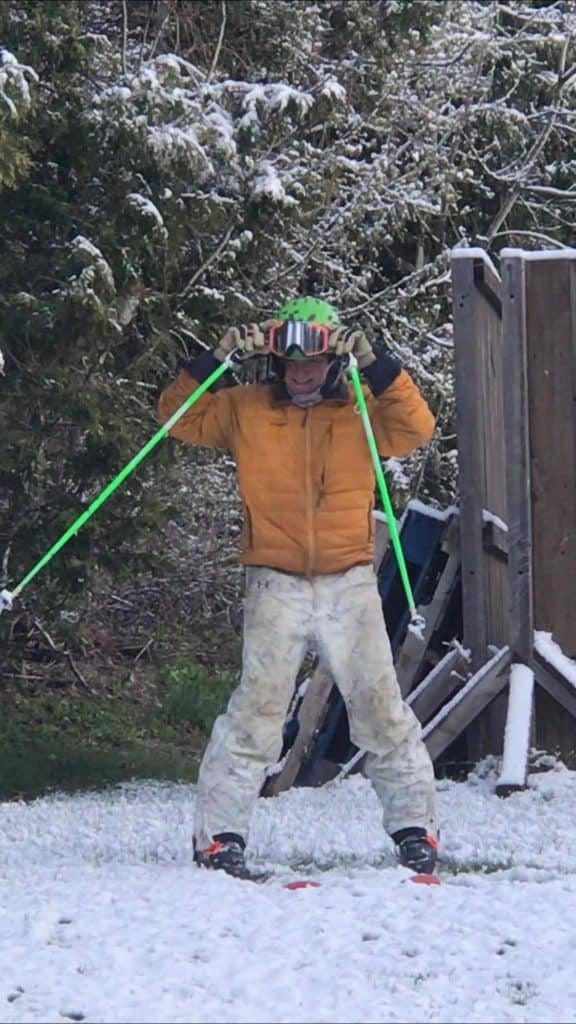 It is an absolutely gorgeous Saturday morning in May. The daffodils, pansies and just mowed lawn are now covered with 4-6 inches of dense marshmallow snow and the sky is a stunningly bright blue. There atop the never-before-skied headwall, stands extreme skier and Pittsfield resident, Mark Bragg, prepping for one of the biggest ski moments of his life. You can hear the constant wind behind the camera as the videographer stands waiting, empathetically nervous for this first descent. She watches as the dedicated skier — more commonly known as Moondoggie — assesses the situation from above.

“I’ve seen pictures of this before, but I didn’t think it was this steep,” we hear from the top of the head wall. “Uh, I’m a little nervous, but we’re gonna give you, uh, the crowd something to cheer about today. So wish me luck.” Shaking with anticipation, Moondoggie kicks the dense, sticky snow from the bottoms of his boots and clicks into his bindings and turns his skis toward what might be called the fall line, while making the final adjustments to his goggles. The announcer remarks on the crazy conditions for a day in May and returns our focus to the uniqueness of the moment. We wait, holding our collective breath for the drop in ….

And as Moondoggie launches Scot Schmidt style into the first turn, the videographer pans out and we see that this moment is not a famed, untracked headwall in Alaska, but a simple sloped section of his backyard that no one would ever have thought of skiing — until now. Stunned, you can’t help stare as you watch Moondoggie pull some of the best hop turns ever before seen during a pandemic. And then, yes, you join his daughter and videographer, Remy, in giggling as he acknowledges the crowd at the end. It’s absolute perfection.

“I think the whole idea was it would have been a great day on the hill with the fresh snow on a Saturday,” Moondoggie explained. “So I wasn’t going to miss out on the opportunity to enjoy some great spring skiing and conquer an old fear of skiing the headwall in the backyard.” 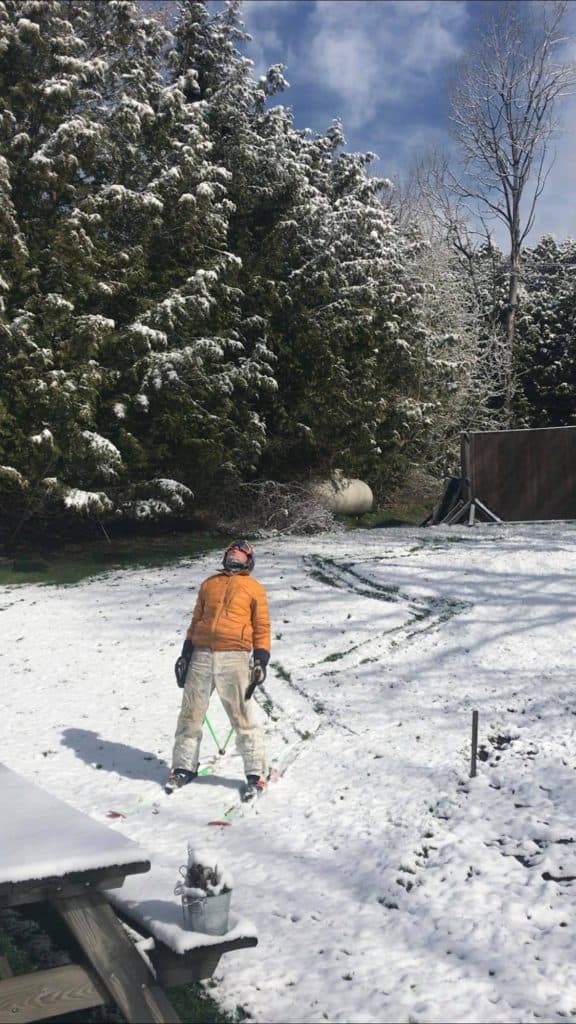 The Killington ski instructor is no stranger to overcoming a challenge and achieving greatness: Bragg is a cancer survivor and a “Piney.” His father, Don Bragg, is the 1960 Olympic pole vault champion and later established a summer camp for boys in the Pine Barrens of New Jersey, where his Olympic roommate Muhammad Ali was a frequent visitor and guest coach — for boxing.

Killington area folk might recognize Moondoggie for his role in the not-so wildly acclaimed but massive local favorite ski adventure film, “Icebreaker,” starring Sean Astin. In it, you can watch Moondoggie shredding through the woods of Killington with a machine gun in his hands, chasing down the local ski patrol to prevent them finding the nuclear weapon. Seriously though — does a ski resume get any better than that? A ski instructor, extreme skier and a ski movie stunt man?

Since he moved to the Killington area in 1985, Moondoggie has been known for his fun loving smile and positive attitude, enjoying everything that Vermont has to offer and making it his life. In summer, Bragg transforms into his alter ego — the Kayak King — and rents kayaks on Kent Pond.

You can hear the pride in his voice as he describes the pond to his guests, pointing out the bald eagle overhead and the loons nesting on the island. He sees the beauty in the small things and finds joy in what other people might not.

How else do you think he ended up skiing his lawn on a snowy day in May?