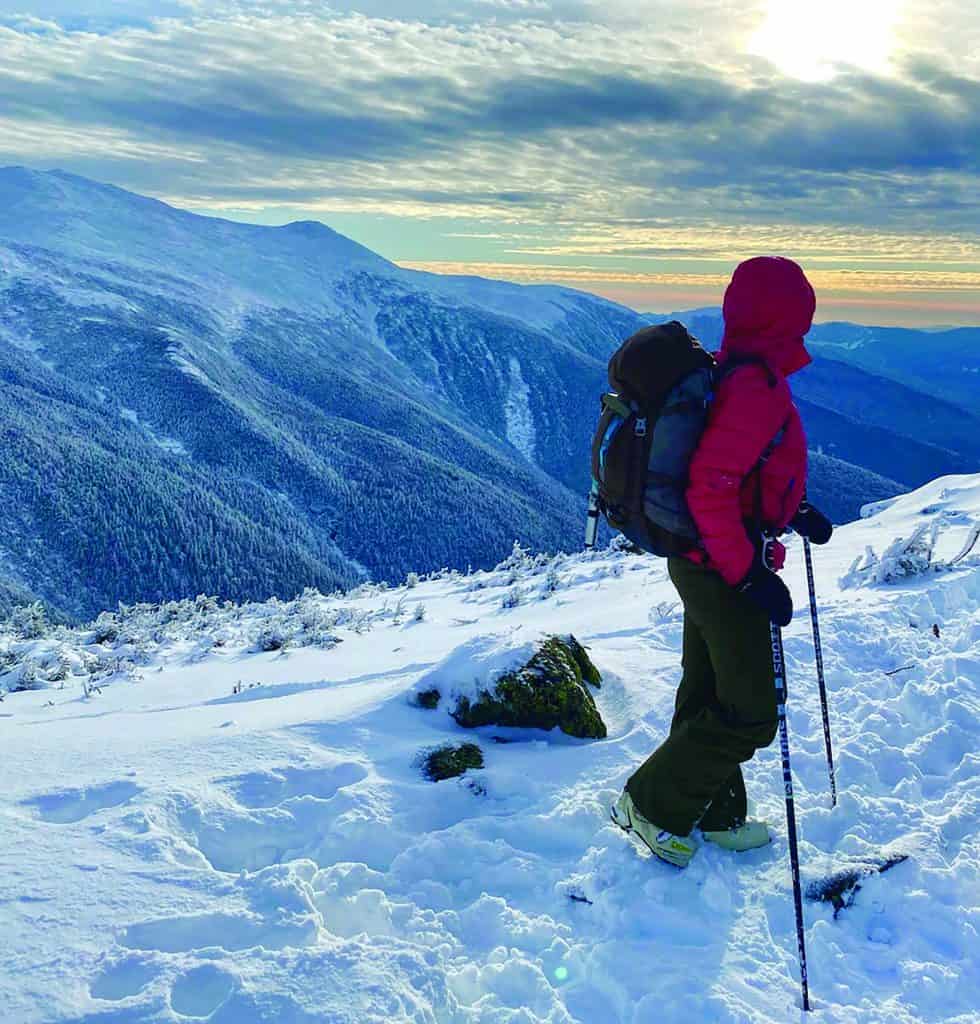 The howling wind cut across the exposed ridge line was trying to knock us off our skis.  Protected on the right by the track of the Mt .Washington cog railway, the mountain just dropped off into the valley on our left. One slipped ski and down we would go, 3,000 feet into the valley below.

The soft snow of the lower elevations had turned to windblown hard pack as we got above tree line, with ridges that looked like frozen waves. I could feel my skins slipping backward as I tried to navigate the frozen surface while being bombarded by the winds. The boys were ahead of me and I could feel my breathing begin to quicken and shallow.

This was the Presidential Range, home of Mt. Washington—with the worst weather in the world—and I should have known better than to think this was going to be a simple ski tour.

Our journey had begun just a few hours and a couple thousand feet below, where the sky was blue and the snow was soft. We had followed the track of the Cog, a coal fed steam locomotive from the 1860s that still transports people 3.5 miles to the summit of Mt. Washington. The skiable terrain, which had begun as a wide field with a track down the center, was now a 9-foot wide strip with protective pine trees of decreasing size.

That is, until we stepped out above the tree line and were hit with the full force of the wind and awe-inspiring majesty that is the Presidential Range.

Stepping into the alpine zone is like popping out of rabbit hole into a great new world, where trees disappea,r to be replaced by snow capped mountains. A peaceful silence resonates across the ridge, countered by the overwhelming howl of the wind. I remember once, many years ago, we spotted an antique gentleman dressed like a mountaineer from the 1800s, carrying a long wooden- handled mountaineering axe. He emerged atop a rime- covered boulder at the edge of the ridge, releasing a yodel deep from his soul. We stood in awe as the ancient mountaineer’s song merged with that of the mountains. To this day, that remains the most beautifully spiritual moment I have ever witnessed in the mountains.

There would be no yodeling today. In our hunger for fresh snow, we had persuaded ourselves that ascending the gnarly windblown section from the tree line up to the ridge was a good plan.  About 1,000 vertical feet shy of the summit, my body strongly disagreed. I could feel my breath shorten, my heart speed up and my legs begin to shake. This was not the first time I have removed my skins in high winds on the side of an off-camber icy mountainside while violently shaking, hyperventilating and shedding unwanted tears. And it definitely won’t be the last. The spirit of the mountains calls deep to my soul and I will always answer. Especially when there is a couple miles of fresh snow just waiting to be tracked up by a couple of ski bums from Vermont.