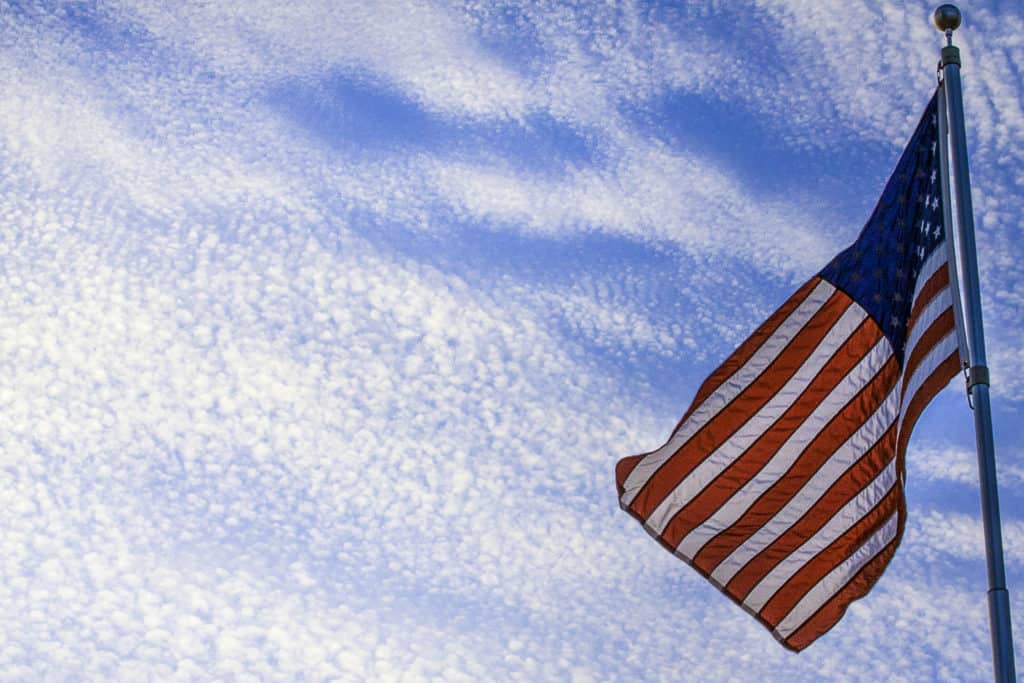 It was the responsibility of the fifth grade and we took it very seriously.

Instead of participating in the chaos of homeroom each morning, the designated group would get the flag from its place of honor in our classroom and slowly descend the main stairs. We would be the only ones in the hallway and the eerie quiet made our mission seem even more important. Unsupervised, we would dawdle and take the time to explore the secret, forbidden areas. Sneaking peeks behind the closed door underneath the stairs or peeking into the teacher’s lounge transformed our assignment into an adventure.

Together, we would tug open the main doors to the school – large wooden doors, ornately decorated with iron scrolls in the window panes and built tall enough for a giant to pass without ducking. The dark space between the doors was one of the scariest places in the school and we moved through quickly, making not a noise except for our grunts to force the door open. Stepping into the sunlight, we would skip down the rounded concrete stairs, careful not to drop our important package as we headed straight for the flagpole.

One would unwrap the old hemp rope, a testament to the care of each fifth grade class before us. The second student would pull out the final fold, his little hands tugging at the sturdy seam to expose the brass eyelets. It was always a stressful moment, completely dependent on who had put the flag away the previous evening. Everyone remembers … but never again mentions – at least one time they had to dive to the ground to catch the flag as just one tug unfurled the sometimes not so tightly folded triangle. There was no thought of being punished for such a deed. Even as elementary school kids we understood the privilege of our assignment. The flag would not touch the ground on our watch (although one pair accidentally hung it upside down once. That caused a little bit of chaos).

While it was glorious to see the flag unfurl as we raised it high, my favorite was always the end of the day. To be engulfed in the descending flag, its bright colors and sturdy cotton falling into outstretched little arms and piling up onto your head. You had to be on your toes, running around the flagpole to catch the red and white stripes as they blew in the wind; the seriousness of the moment forgotten but not its importance. For a not-yet-fully grown fifth grader, it was like being engulfed in a gigantic parachute. Then of course, there would be some argument as the student working the ropes had either let the flag fall too quickly or was taking their good sweet time because they messed up last time.

Ahhh, but the art of 10-year-olds folding the flag. After finding all the corners, you would pull it as wide as your little arms could reach — which usually meant there would still be a sag in the middle until you made the first fold, pulling up and far away from each other as you could, but not leaning back too far in case you fell to your butt. Then, the second fold, which you would frequently have to do again since you forgot to pay attention and the stars were on the inside. At this point, the real arguing would begin. The person holding the stripes would be trying so hard to make each triangle tight and perfect, while the fifth-grader on the other end would be gazing at the ivy climbing the building or waving at a friend peering out a window. Whatever it was, they would definitely not be keeping their end of the flag tight and steady.

The idea of bringing lumpy triangles back into the classroom never occurred to us — we would refold until we got it right. It was always the biggest sigh of relief when all the stripes aligned and you could finally feel the thick stitching on the stars. Oftentimes, we couldn’t get the final seam to tuck into the stars, but there would be no red or white stripes showing as we paraded back to the classroom to present our teacher with the folded flag. No one was left out, we worked with a different classmate each time and we all understood that the flag belonged not just to our class, but the entire school and the country. Fifth graders are not the tightest or best folders, but every morning and afternoon, we taught each other about duty, honor and respect. And that flag never touched the ground.