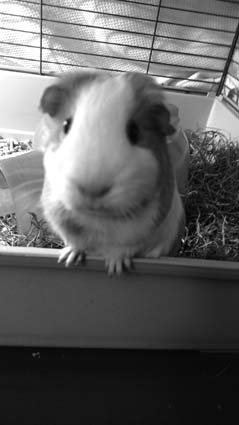 There have been worse times for Pip the Impaler. Even now, he sits in a pile of hay, giving me his apple eyes, knowing that just beyond his reach is a treasure trove of sweet things: apple, pineapple, and other fruits unimaginable.

For those of you who do not remember, Pip the Impaler is my guinea pig, rescued at the age of about one from his five-year-old, free-range, ADHD captor in early June. He was a replacement for the recently deceased love of my life, Stinky Pete (who died in my lap at the age of about eight or so, also in June). Pip and I met on craigslist, and I knew, the moment I saw his picture, that I had to have him. He looked so cute and hopeful.

Pip (named for the hero of “Great Expectations”) turned out to be a much harder case than I expected him to be. I was absolutely certain that with a few pieces of apple, a good bath, and a nice pile of hay he would instantly become my best friend. I missed having a guinea pig in my life.

It turns out that Pip was not so easily impressed.

I brought him home, set him up in his new digs, gave him a bath and a long, warm-towel-wrapped snuggle, and he proceeded to act like a savage and poop orange (I swear to God, I think all they fed him was crayons and ice cream). Any time I would reach for him he would snap at me like a dog biting the water stream from a garden hose. Though most of his biting was more for show than for anything else, he did draw blood three times, once on my nose. This is how he earned the moniker “Pip the Impaler.”

Guinea pigs, especially young ones, are skittish animals, but they are rarely if ever bitey or snappy, and I have to wonder what made him that way. Children are not always the best with animals.

In any case, over the months, things have been hard. It has been a bit of a slog trying to acclimate him, and every step forward has been met by a step or two backward. Though his snapping has subsided for the most part, he goes through periods of severe antisocial behavior where he will run away from all contact, and even start to snap when he is overstimulated (though he never makes contact anymore, which I suppose is big progress). We will get a couple of good snuggles in, but then he will greet me with skittishness and attempts at fleeing. Once he wouldn’t even let me scratch under his chin, which had been our jam, right from the beginning.

I am making some progress now, seven months later, only through diligent work and patience, and three-times-daily bribes with apples. Every time he gets something sweet, I feed it to him from my hand (if he steals it I take it right back), and pet him the entire time that he is eating it.  He gets the last bit when I put it between my teeth, let him have a few bites, and then let him steal the last bit of food from my mouth.  I am hoping, since guinea pigs regularly eat food out of each other’s mouths, that this will signify some deeper littermate type connection, and that he will start to bond with me.

I have also figured out that if I try to snuggle him when he is out and active, it is a useless gesture, but if I catch him while he is napping he a) doesn’t try to escape when I pick him up, and b) goes back to sleep for a bit on his pillow in my lap.  This is gratifying, even though I know that it is a fake snuggle. He isn’t there because he wants to be there;he is there because he is too tired to fight it.

I miss Pete. I miss him a ton. But I really hope that I can get Pip to turn the corner.  He had a rough start in this world, but so did most of my favorite people . . . many of whom were miserable [expletive deleted] when I met them.

Pip is no exception. I am doing what I must though, showing up, doing the work, and hoping for the best. If it pays off, it will be all the sweeter.