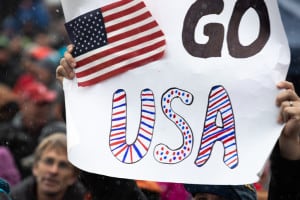 “Showcasing Killington and the state of Vermont to the international ski community for a third year in a row, has us and the entire surrounding community bursting with pride,” said Mike Solimano, president and general manager of Killington Resort and Pico Mountain. “Everyone involved, from volunteers to groomers, put on another great showing for athletes and spectators. We’re very much looking forward to keeping this event on the East Coast next year.”

“I could hear the crowd the whole second run, from the start to the finish. The crowd really carried me down the hill, and it’s just amazing to race here in front of everybody. The atmosphere is incredible,” said Shriffin.

The Killington Cup was broadcast in more than 60 countries worldwide and live on NBC in the United States.

“Killington Resort and the fans have proved once again that the East can successfully host world-class global ski racing events,” says Herwig Demschar, chair of the Killington Cup local organizing committee and vice-president of international business development at POWDR. “The bar has been set higher with each passing year of the World Cup at The Beast of the East, and the rest of the ski racing world is taking notice.”

Over 2,000 children from New England ski clubs participated in the opening parades Saturday and Sunday.