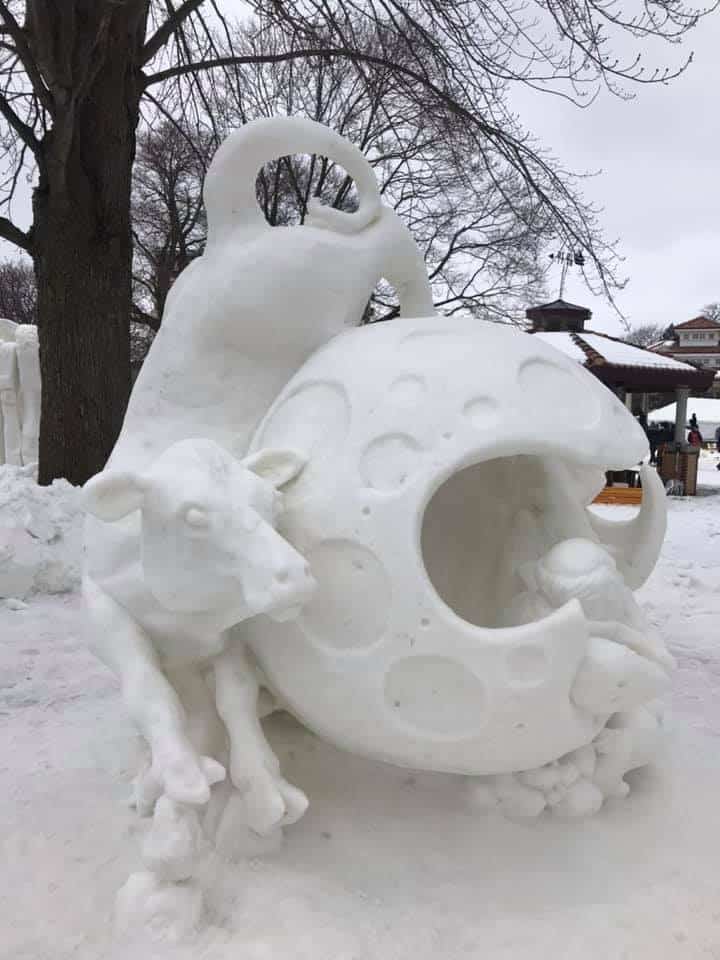 A team of three snow sculptors from the Woodstock area have won the U.S. National Snow Sculpting Championship held in Lake Geneva, Wisconsin, Jan. 29-Feb. 1. The competition attracted the most talented snow sculptors and artists from 15 states. It was the 35th anniversary of the annual event and the fifth time the local team has represented Vermont there.

Local artists Tony Perham, Katie Runde and Mugsy Logan made up the Vermont team called “Pour Saps.” This was the fourth year they represented the state of Vermont at Nationals. Together they executed an incredibly detailed and complex sculpture called “Moooon Stories.”

“Our sculpture this year was the cow jumping over the moon. The moon was hollowed out in the back, which cradled the man in the moon dozing off while reading a book,” Perham explained.

Each sculpture is ranked by all of the sculptors in the competition as a jury of peers.

“The competition isn’t just about who can make the best dog out of snow,” said Perham, by way of example. “The sculpture also has to tell a story and make the audience feel something deeper, we really tried to do that with our sculpture and we were so pleased that the judges recognized that aspect of our work.”

“Snow sculpture is a labor of love,” Perham summarized.

“Moooon Stories” was praised for its detail, composition and storytelling qualities.

“Snow is one of the only mediums that makes it possible to create a very large sculpture in days,” Perham said. “The history of snow sculpturing dates back to Michaelangelo’s days,” he added.

In a competition environment, teams respect the age-old tradition by only using hand tools. A lot of the tools are antiques or custom made such as old cheese graters, two-man cross cut saw and other large tooth saws.

“When at nationals we love to ham up the whole Vermont pride thing: Buffalo plaid shirts and maple related T-shirts. We carry our tools in sap buckets,” Perham said playfully. 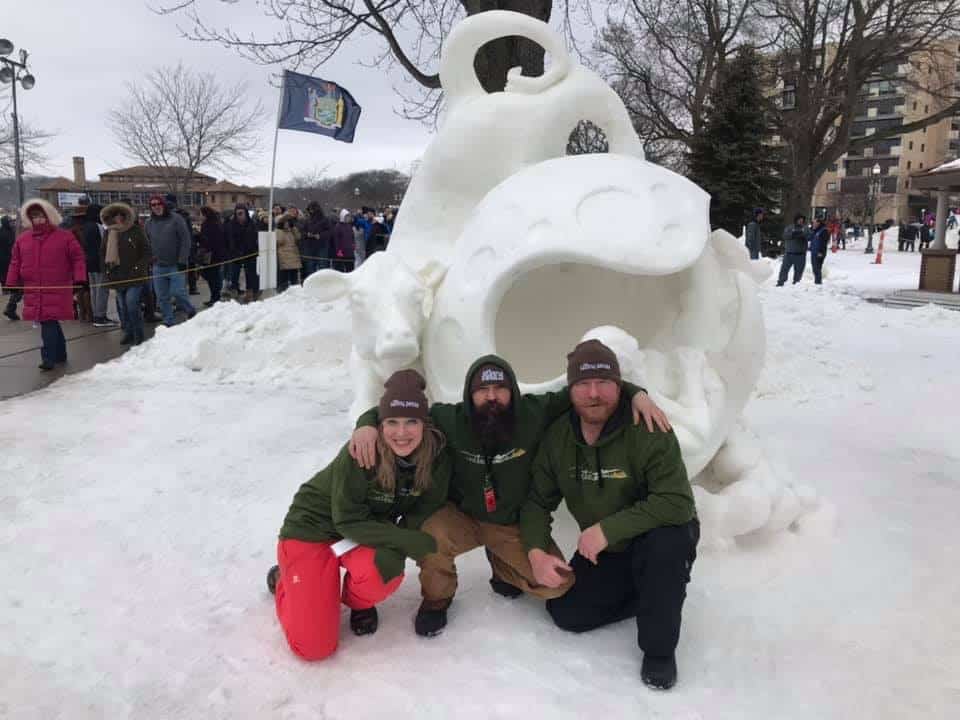 Coloring and amateurs/outside help are not allowed during competition.

“I consider it endurance art,” Perham said explaining that teams frequently put in 30-45 hours of work on their sculpture during a competition.

Each sanctioned state holds a state qualifier and the winner of that earns an invitation to nationals, Perham explained. The Pour Saps did not attend the national competition last year and originally had not qualified to go this year.

“We were invited to nationals this year because the last team that qualified got accepted to go to internationals,” Perham said. “It was a little last minute so we had to scramble to come up with concept and create a model.”

As part of the application process, teams must submit a drawing or model of their entry. When doing so teams must consider how long it will take to complete it — and account for variable weather conditions.

“If warm weather delays you from carving, that may require overtime,” Perham said. “Friday night they have lights set up and you can sculpt all night if need be.”

“With the right temperatures large snow blocks can be transformed into masterful works of art,” he added.

The ideal temperature range is 15 to 30 degrees F. “Anything colder can be brutal. And anything warmer can be frustrating,” Perham said.  “If warm weather strikes and your piece breaks, best case scenario you are able to fix it. We had three legs and a tail break on our cow. Luckily we repaired them all just in the nick of time! We literally had 30 seconds to fix the front leg that had broken a second time.” 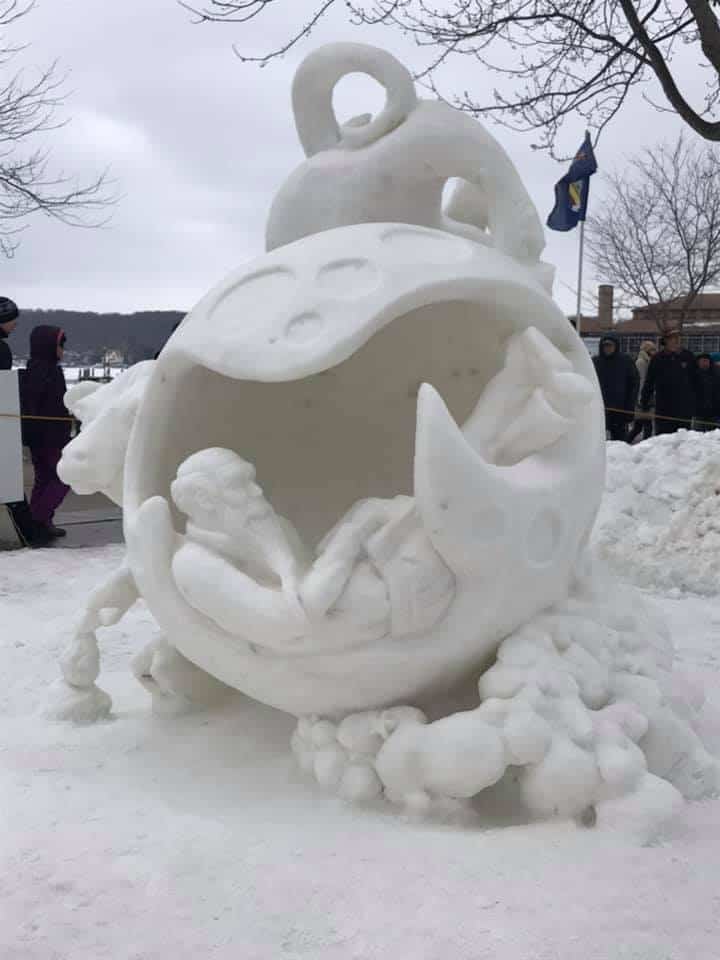 The Pour Saps have attended three years prior and the best they could muster was fourth place. The competition was very stiff again this year.

“I remember thinking there’s no way we will be in the top three. But guess what? I was wrong! This year we have the pleasure of saying we are the United States national champions of snow sculpting!” Perham said.

As proud of their sculpture as Perham was, he was humble about their win. “There were so many great sculptures this year. Those guys from the Midwest always kill it and New England states almost never win against them,” he said. “I’m just as happy that our fellow New England teams placed second and third as I am for us.”

As part of the honor, each 2020 U.S. National Snow Sculpting Championship winner is invited to submit an application the following year for the national event.

Winners of the United States National Snow Sculpting Championship were:

Additionally, Perham won the U.S. National Snow Sculpting  OM Award, a personal honor given to the individual that best embodies the essence of snow sculpting by prior winners of the award.

This year, for the first time, there was a tie for the coveted honor. Tony Perham shared the award with Dan Berry (a.k.a. “Man Bear”) from Illinois.

“I am proud to say I am co-OM award winner with Man-Bear Von Helsingvanbergowitz! Even though I catch him looking at me like a pork chop from time to time, I could not think of a more deserving individual to share this award with! OMMMMMM!!!!” wrote Perham on Facebook.

“I had the distinct honor of winning the OM Award at the U.S.Nationals Snowsculpting Event in Lake Geneva this year along with this guy Tony Perham from Vermont because of our spirit and our love for what we do with snow. I thought they were gonna make us fight to the death for it because we tied but I think they changed the rule because they wanted Tony to live. He’s good people,” Berry wrote on Facebook as “Man-Bear Von Helsingvanbergowitz.”

The Pour Saps are always fundraising, Perham said. “If you are interested In sponsoring the team please email  [email protected],” he added.