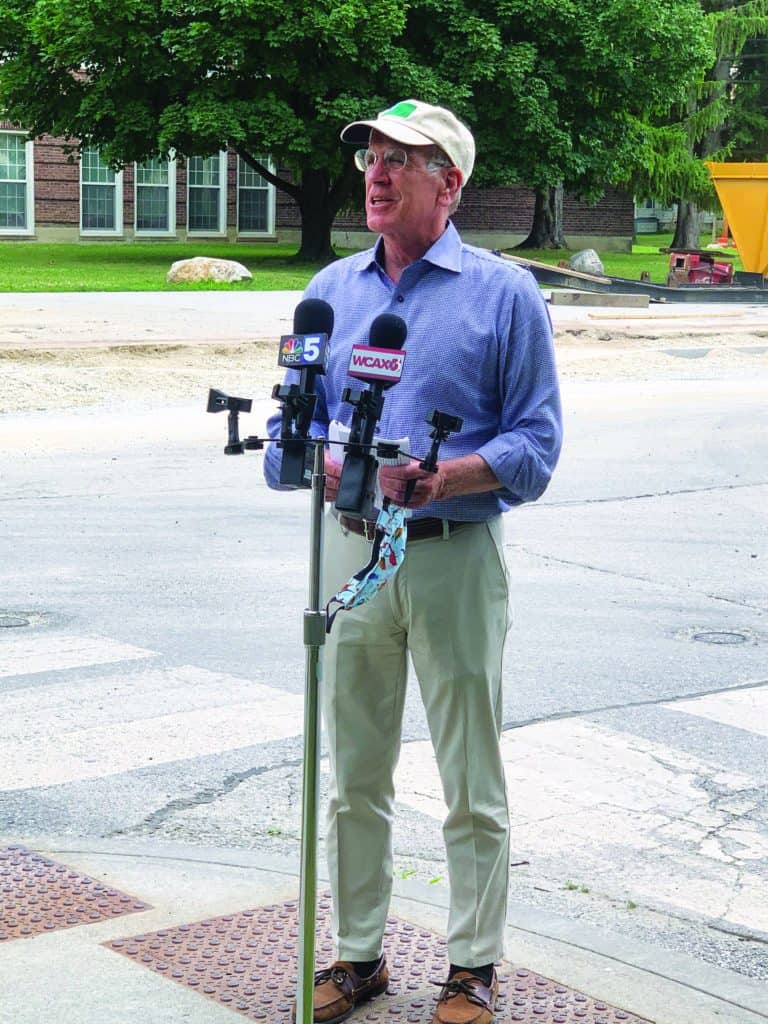 As trucks beeped and concrete was dug up on Library Avenue to install pipe that would reduce wastewater overflows into Otter Creek, Congressman Peter Welch outlined a plan to federally fund similar infrastructure needs on July 16.

“Rutland has been having these infrastructure problems since I was in the state senate,” Welch said on Thursday. Welch remembered years ago when a former Rutland mayor showed him a piece of pipe that dated back to 1858 containing hardened gunk and in desperate need of replacement.

“[Rutland] is an example of a community that’s put a lot into infrastructure but they don’t have the cash base here to be able to do it all,” Welch said. “The federal government has to help out.”

Rutland Public Works Commissioner Jeff
Wennberg said the city has spent about $17.5 million on water infrastructure improvements since the late 1980s. He expected another $40 million in work will be needed over the next 20 to 30 years.

“There’s no way 16,000 people in Rutland can afford to do these things,” Wennberg said in an interview. “We’re going to need a lot of help from the state and federal government or this isn’t going to get done.”

Rutland’s wastewater treatment plan was developed in the 1960s. Today it’s the largest in the state, processing a maximum of  22.5 million gallons on wet days. About 1.7 billion gallons of wastewater and stormwater are processed in the city a year.

“Before 1963, 100% of rainwater and sewage went to the streams because there was no treatment,” Wennberg said.

Despite the investments so far, the city still has about 17 overflows a year, depending on the amount of rainfall, Wennberg said. The overflows, which last just minutes or hours, release about 3.16 million gallons of wastewater and stormwater into Otter Creek in Rutland each year, eventually flowing to Lake Champlain.

While the environmental impacts of the overflows are minimal, the human health impacts are significant, Wennberg said.

“The frequency is much too high,” Wennberg said. “We need to do a lot more work.”

The $2.8 million project underway now in Rutland will separate storm water from wastewater with about 5,400 lineal feet of new storm sewer pipe being installed. The city received a $500,000 grant for the project and is paying for a $2.4 million bond to cover the rest of costs. The project is expected to be completed in December.

The Library Avenue project is the second half of a larger project that started in 2015 to install separation pipes covering 100 acres. Wennberg said a concrete box the size of a bedroom will be installed underneath the road to catch items that float, like cigarette butts. Heavy items that end up in the sewer will sink to the bottom of the concrete box and the rest of the water will flow to the stream.

“It’s not great treatment, but it gets rid of the worst stuff,” Wennberg said.

Welch said he didn’t expect his bill would pass the Senate this year but he and
Wennberg were hopeful it would be picked up next year.