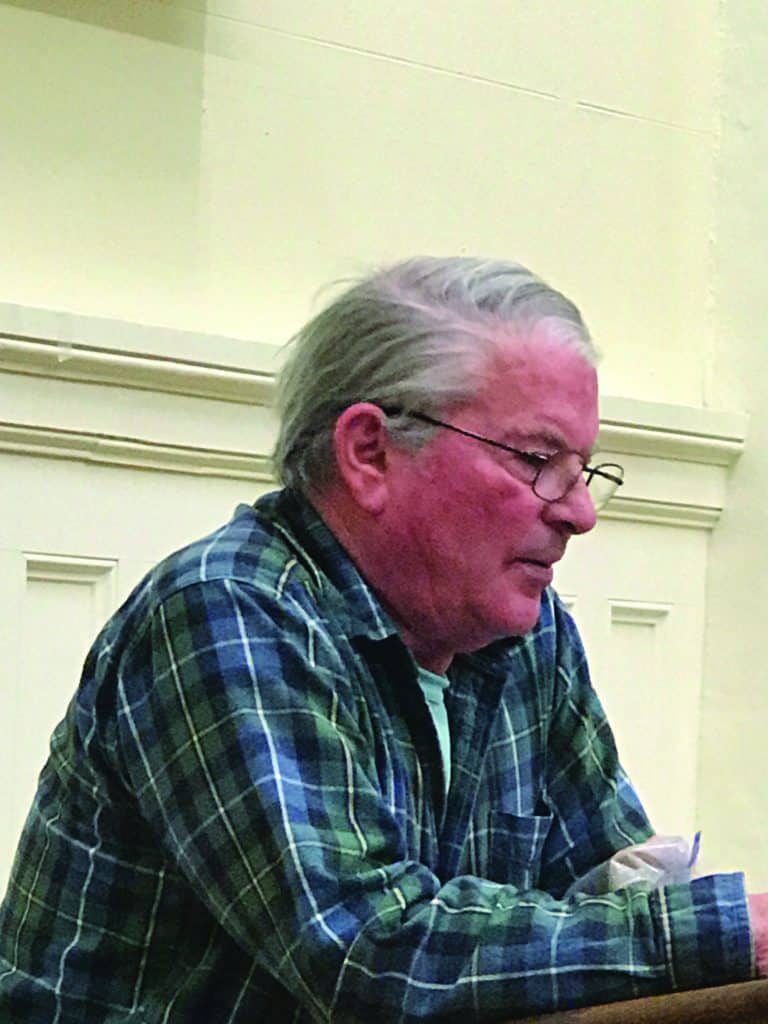 The volunteer speakers at Rutland’s Veterans’ Town Hall Nov. 3 were men who served in wars in Vietnam, Iraq or Afghanistan. They didn’t speak about heroism, or the excitement of combat, about brotherhood or about victory against the enemy — they told personal stories mostly about personal damage and about the hell of war.

Kyle Aines, a Tinmouth native who hosted the Rutland Free Library event, enlisted as an Army combat nurse in 2003. Something happened during his two tours in Iraq that affects him to this day.

“While I was watching and tending to prisoners of war inside the base, two helicopters went down and my team was called out to assist any wounded,” he said.

While he was inside the base, his men were ambushed on their way to the crash site.

“Last Roll Call” is a field ceremony honoring lost comrades. Names are called out. The first three names called received – “Here, sir!” Then the names of the missing men were called. Nothing but silence.

“It was so impactful,” Aines said. He left formation and retreated to some shade, sat and sobbed. “I was angry at myself for crying instead of honoring my comrades. I never cried again except when I was drinking.”

Many servicemen and servicewomen fall into addictions to escape emotional pain brought on by wartime memories. Aines, who is the associate director of veterans and military services at Community College of Vermont, said he has been sober for six years.

Rob Bromley, a childhood friend of Aines, became an Army nurse in Iraq.

“It was just like the T.V. show “M*A*S*H*,” except we lived in old Iraqi army barracks instead of tents,” Bromley said. “Our job was to stabilize wounded U.S. troops and ship them home as soon as possible.”

Bromley said wounded Iraqis had no place to go – some were kept at the base hospital for months. They also treated prisoners of war. Iraqi translators for the POWs wore masks and used fictitious names to hide their identity.

“I got to know the locals well,” Bromley said. “They are just like us – they like to sit around, drink tea, smoke their hookahs.”

“I thought, ‘what are we doing here? Are we helping the locals, or are we harming them?’” Bromley said. “A mighty military is a big responsibility. How do you use it?”

“Some people are too eager to throw our military weight around,” he said.

Richard Zapinsky was studying engineering under a Reserve Officer Training Corps scholarship when he was called up. Instead of Vietnam, he was sent to Washington, D.C., where he served from 1964-69.

When he was discharged, Zapinsky went back to school and began actively protesting the Vietnam war.

“Somebody died for me in Vietnam because I didn’t have to go,” he said. “When soldiers sign up they are young and have no idea what it’s all about. I get so depressed about what we do overseas. And now I do everything I can to promote peace.”

Jack Jesser was in Vietnam for a year around 1959. He was a machine gunner and had that extra weight to carry as they struggled through the jungles.

“My legs hurt so much,” Jesser said. “I would hit myself in the leg with my rifle to distract me from the pain.”

Craig Popkis got his pilot’s license when he was in high school  – fascinated with flying, he spent 15 years in the Air Force.

He later became a pilot for Delta Airlines and made it his career.

“The military teaches cooperation, discipline and camaraderie,” Popkis said. “These things have helped me in every job I held.”

Veterans’ Town Halls were inspired by an article written by Sebastian Junger and published in Vanity Fair. The intent is to induce interaction between veterans and people who haven’t served, in an effort to support returning soldiers as they reintegrate into society.

The annual events are held a week before Veterans Day, and “veterans are invited to speak, unscripted, about what their service means to them,” according to a statement in the press release.