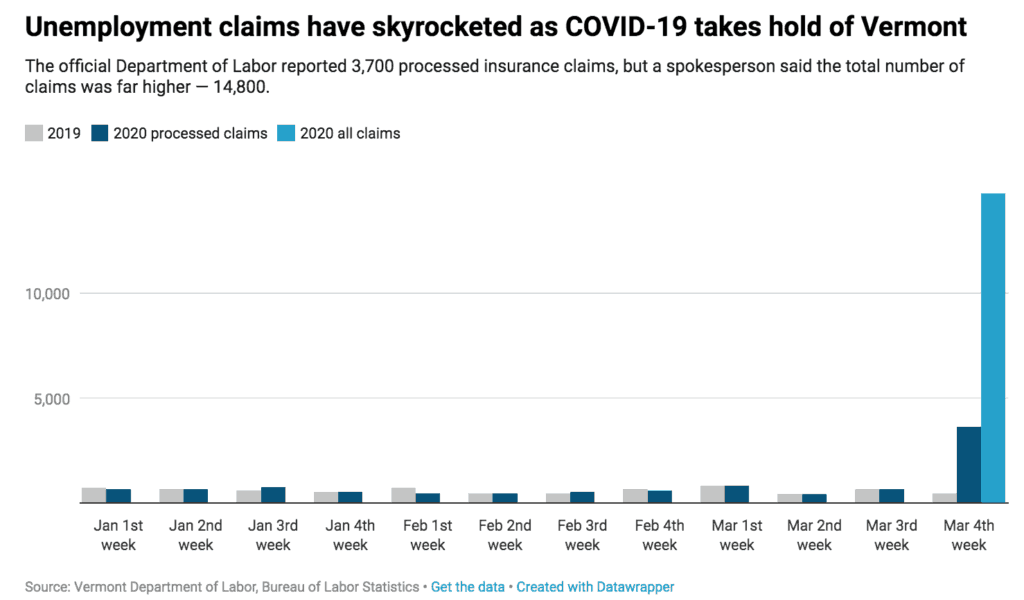 The Vermont state labor department received 14,784 claims for unemployment for the week ending March 21. The huge spike in claims came in the wake of coronavirus-related layoffs.

In fact, the number of people applying for unemployment insurance is three times higher than the previous record.

Officially, the number of Vermonters who lost their jobs and applied for unemployment insurance was 3,667, according to the Bureau of Labor Statistics. But that number is not the full picture, said Department of Labor Commissioner Michael Harrington. He explained that the department’s Unemployment Insurance Claims Center was still processing as many as 11,000 additional online claims when that number was reported.

“The numbers we publish today are preliminary numbers,” Harrington said. “That’s only counting the people who could get through and get into the system.”

There have been only three weeks where applications exceeded those number, and they happened when retail employees were laid off at the end of the holiday shopping season.

To put last week’s applications in perspective, during the week ending March 14, applications totaled 659, less than the weekly average of the past 35 years. At the peak of the Great Recession in 2008-2009 there were only two weeks when just over 2,000 Vermonters applied for unemployment insurance.

Vermont is not alone in seeing the steepest rise on record. Nationally, 3.3 million people applied for unemployment insurance. The previous week’s number was 282,000. That increase breaks all records.

Vermont’s increase, as reported by Harrington, was 22 times higher than last week’s claim rate. Nationally, the increase was 11.5 times greater. However, many states like California and New York were swamped like Vermont and have not reported the actual number of claims. Next week, the numbers will likely swell.

The week ending March 21 was just the beginning of large numbers of layoffs. When this week’s number is tabulated and released on Thursday, we’ll see thousands more people applying for unemployment insurance and that high number may continue for a third week.

The number of new applications is likely to be higher for several reasons. First, more workers were laid off this week due to Governor Scott’s announcement of additional emergency closures.  Second, the Vermont Department of Labor has been swamped with electronic applications for unemployment insurance, as has every other state. They are still working through last week’s backlog and that will no doubt continue through this week and possibly next.

Many of the laid off workers are eligible for state unemployment benefits. And the federal stimulus bill, passed in the wee hours of last Thursday, March 26, added $600 per week in additional benefits—more than doubling current UI payments in Vermont, which are capped at $513 per week. The bill also expands eligibility in several ways, including making self-employed workers eligible for benefits. That’s a very big deal for many Vermonters.

The sharp employment decline comes on top of an economy that basically has been becalmed in the water for the last four years, at least when we look at the employment numbers.

Each year in March all 50 state labor departments revise their estimates of jobs and unemployment for the past few years based on better and more complete data. For Vermont, those revisions showed the state had a record 316,100 jobs in 2019.

But that was up a scant 100 jobs from 2018. Moreover, the 2019 job count was revised down by 900 jobs, not a huge amount, but an indication that what we thought was going on last year was better than the reality.

So, the nearly 14,000 people who lost their jobs and applied for unemployment insurance during the week ending in March 21 more than eats up all those gains.

However long the current economic shutdown lasts, it is sure to mean that the U.S. and Vermont economies are in a recession. Even if the shutdown ends at the end of April, it will take months for economic activity to recover.

Vermont’s total 2020 job count will be less than the 2019 numbers. That will be the first time that’s happened in a decade.

Art Woolf recently retired as an associate professor of economics at the University of Vermont. He is a columnist for VTDigger.