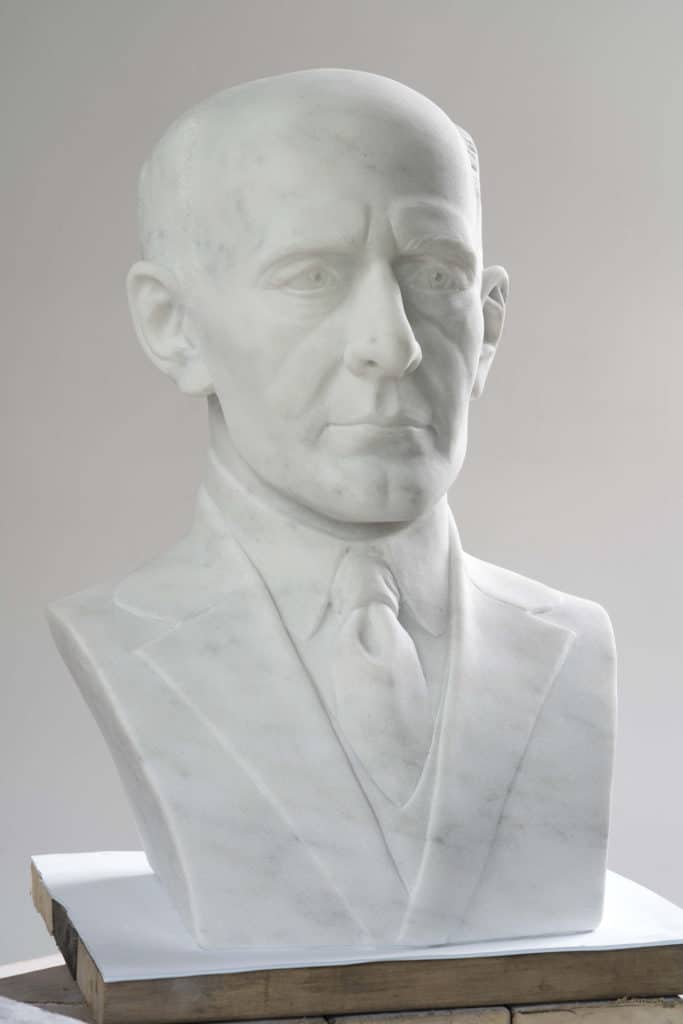 The Rutland Sculpture Trail will expand early next month with the addition of a marble portrait of Paul Harris, a Rutland County resident who founded Rotary International, one of the world’s largest service groups.

A larger-than-life bust of Harris, designed by Amanda Sisk and carved by Evan Morse in “Danby White” marble donated by Vermont Quarries, will be unveiled Tuesday, Oct. 6, at noon. The public is invited to attend the outdoor event; masks are required, and attendees are asked to maintain social distancing.

The sculpture will be installed on the west side of Merchants Row, outside the Opera House.

“Evan executed a stunning, powerful, and spirited likeness from Amanda’s design,” said Carol Driscoll, executive director of the Carving Studio and Sculpture Center. “The eyes and mouth provide an expression of humor and earnestness simultaneously.”

Harris was raised in Wallingford by his paternal grandparents, and graduated from local schools. After attending the University of Vermont and Princeton University, he received a law degree from the University of Iowa and eventually settled in Chicago.

Longing for the kind of camaraderie he said he enjoyed in Rutland County, he founded Rotary in 1905. Rotary quickly expanded to other major U.S. cities, and ultimately grew to include thousands of local clubs around the world.

“Friendship was the foundation rock on which Rotary was built and tolerance is the element which holds it together,” Harris once wrote.

The project was funded by Rotary chapters in Rutland, Killington, and Dalton (Massachusetts), as well as Rotary Clubs, Rutland Blooms, Mary Moran, and an anonymous donor.

The Rutland Sculpture Trail is an initiative led by the Carving Studio and Sculpture Center, Green Mountain Power, MKF Properties, and Vermont Quarries to create art and interest in downtown, generate community pride, and honor important local and regional history. The artworks are being installed in downtown Rutland, and presented as gifts to the city.