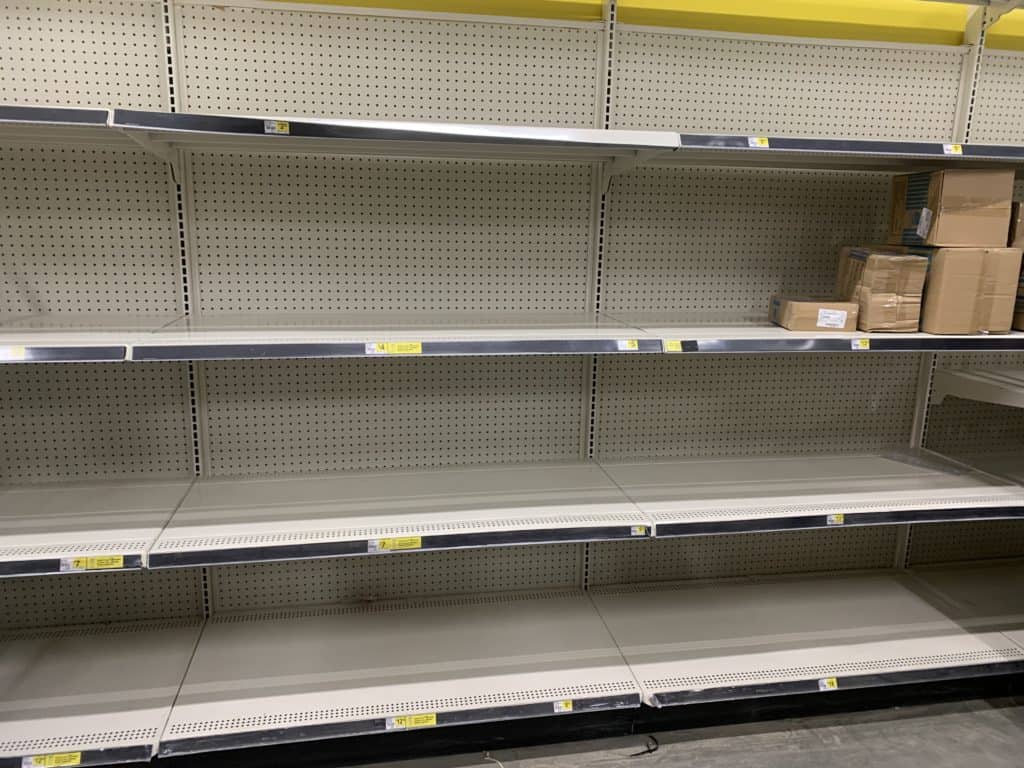 Anyone seeking paper goods, cleaning products, chips, meat or frozen food were largely out of luck at many stores across the state, which have seen heavy traffic as worries about the COVID-19 virus have intensified.

Grocery stores of all types and sizes are seeing runs on supplies, chiefly toilet paper and paper towels, which have been in high demand worldwide as people prepared for recommended quarantines. Many supermarkets, such as the Hannaford’s and Market 32 supermarkets in Brattleboro, ran out of toilet paper altogether last week; others put limits on how many packages customers could buy at once. In Rutland, Hannaford’s is currently limiting customers to two per person on items such as paper towels and Lysol cleaners. Even so, these high-demand items are selling out daily. They are also being restocked as quickly as supplies allow.

Stockpiling groceries is a common response to news of impending disaster, and under the circumstances, the run on stores in Vermont and the rest of the world hasn’t been unusual.

Humans might have an instinctual drive to hoard supplies, said Jay Zagorsky, an economist and senior lecturer at Boston University who writes about public policy, law and human behavior for The Conversation.

The Boston-based Zagorsky skied with his family at Jay Peak last week. Nobody there seemed to be talking about coronavirus, he said. But back at work on Saturday, Zagorsky reflected on the forces that lead people to stockpile things like diapers. He stocked up on wine a few weeks ago.

The run on supplies affects stores large and small. Price Chopper sent out a missive Friday announcing it was prepared to limit purchases of some items such as the high-demand sanitizers and paper products. They also announced all stores would be closed from 1 a.m. to 6 a.m. to allow proper cleaning and restocking of shelves.

“Other than the five non-food products that have collared national news for the last week, the food supply is not in jeopardy,” Price Chopper V.P. of Public Relations Mona Golub said. “Things are just selling out on a daily basis, but not forever more. Most items we get in daily, some items, such as hand sanitizer we may be only getting every day. But no food items are out of stock. The supply chain is functioning and flowing under the weight of great demand nationally. Usually in the face of disaster it’s relegated to one area, and this is global. From one chain to the next and one neighbor to the next, we need to respectful because there’s plenty to go around.”

The two-room Buxton’s country store in Orwell ran out of ketchup and tomatoes for sandwiches Saturday, sending owner Andy Buxton down the road to the Hannaford’s in Brandon for more. Buxton estimated that he’s doing about twice as much business as usual at the family store, with people ordering 15 pounds of ground beef at a time at the deli counter. Buxton’s store sold out last week of deli meats, other meats and produce, though a regularly scheduled delivery Friday night allowed him to restock.

On Friday, Buxton said: “Nobody was panicked, nobody was in a bad mood. What people needed yesterday was interacting with other people, the comfort of going through the same thing.”

There was a lot to talk about. On Friday Gov. Phil Scott declared a state of emergency and the Centers for Disease Control and Prevention was reporting more than 110,000 cases of COVID-19 worldwide.

“It just seemed like everything became real yesterday,” Buxton said of Friday. “I’ll remember this day for a long time.”

On Friday, Buxton posted a message to the store’s 3,500 Facebook followers offering free deliveries to people who are quarantined and need supplies. Neighbors wrote back with offers to help with those deliveries. The pandemic has prompted the same kind of fellow-feeling that Buxton experienced during the 9/11 terrorist attacks in 2001.

“With 9/11 a very tragic thing happened and everybody united for each other, and I think we’re going to see that again,” he said.

Because they are durable goods and don’t go bad, if the toilet paper and paper towels aren’t needed immediately, they will serve as a supply until mid-summer, possibly resulting in a slump in paper product sales a few weeks from now, said Zagorsky. The large stores are better positioned for a drop in sales that might follow the stockpiling.

“Big grocery chains almost always have lines of credit with large banks, so they can borrow temporarily,” Zagorsky said. “With large banks, your local grocer or small country store doesn’t have the ability to walk into the local bank and say, ‘Can you lend me $100,000 to tide me over until COVID-19 disappears?’”

In other cases, the money and the food will likely go to waste.

“When people panic, they typically tend to buy everything – the orange juice, milk, ground beef. If they keep it in the fridge, it just spoils and they’re going to end up throwing it away,” he said.

That said, Zagorsky is steering well clear of economic predictions.

“Your guess is as good as anyone else’s,” he said. “We have no idea. There are a whole bunch of scenarios.”
But everyone seems to agree that the supply chain for food in America is doing fine and shipments will continue to restock shelves.

The Trump administration and grocery industry leaders say the U.S. food supply chain is holding up despite heavy strain due to hoarding behaviors, which has cleared out shelves of nonperishable foods, household cleaners and essentials.

“There’s no need for anybody in the country to hoard essential food supplies,” said Trump during a news conference Sunday evening.

Kevin O’Connor, Aidan Quigley and Justin Trombly from VTDigger contributed to this report.