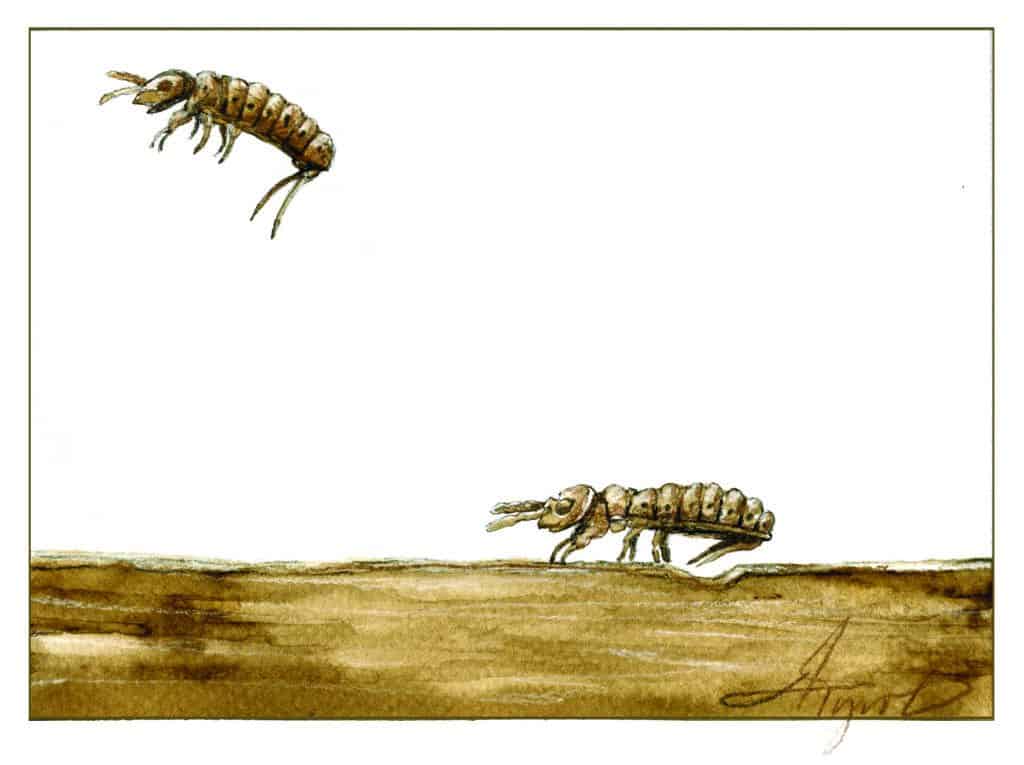 As we leaned over the Colchester Bog boardwalk, a student asked, “What’s that black stuff on the water?” I suggested gently poking it with a twig. This elicited the expected response: as though ejected from James Bond’s Aston Martin, tiny black flecks scattered, landing inches away and on my student’s hand.

Springtails, the Tiggers of the invertebrate world, are often seen bouncing out of footprints and depressions in snow; hence another moniker: “snowfleas.” Although they have six legs and hop, they’re not actually fleas. They’re not even insects. Taxonomic revisions have alternately kicked them out of and accepted them back into the insect club for decades. Springtails, who, as far as we know, don’t much care how they are classified, are now in a class of their own: Collembola.

The word “collembola” relates to an intriguing structure called the “collophore,” and is derived from ancient Greek words kólla, meaning “glue,” and émbolon, for “wedge.” The collophore is a telescoping tube behind the rear legs that springtails can extend to reach any and all parts of their tiny bodies. The collophore allows a springtail to aim the direction of its leap, and also serves as a grooming mechanism.

At the end of the springtail’s abdomen is what gives it its spring: the “forcula,” which as the name implies is a forked structure, folds under the springtail’s body like a jackknife and is held in place by a catch called a “tenaculum.” When faced with a predator (or poking twig) the hydraulically pressurized forcula is released, propelling the springtail up to 300 body lengths away. Operating at our scale, they’d comfortably clear anything on the Manhattan skyline.

Another common trait among springtails is a “cuticle,” or hard outer layer, that repels water. This is useful in melting snow, and it’s also helpful for aquatic species like Podura aquatica, the springtails my student and I encountered at the Colchester Bog. This springtail’s cuticle allows it to forage on still waters without drowning.

Podura aquatica lives on temperate water bodies throughout North America, Europe, and Asia and grazes on diatoms, plankton, unicellular algae and rotting vegetation trapped in the surface film. These aquatic springtails have larger and flatter forculas than those of their dry land cousins, facilitating leaps from bogs and ponds without breaking the surface tension. When I watch them bounce from Colchester Bog, I don’t even perceive the slightest ripple.

Bouncing is not the only way Podura aquatica gets around. In a 1915 thesis, George H. Childs, a University of Minnesota entomologist, observed they jumped only when disturbed and mostly got around by walking on the water surface. Jumping is risky when there’s little flight control, and an errant springtail could end up high, dry, and away from a suitably wet habitat. Curiously, Childs also noticed that this species uses its antennae as a fourth pair of legs. In fact, when he removed the antennae, the springtails struggled to walk at all. Childs also discovered that springtails overwinter buried in frozen mud above the waterline.

There are some 9,000 springtail species worldwide. Most are landlubbers that occasionally end up on water, but Podura aquatica is not unique in its aquatic habits. An Introduction to the Aquatic Insects of North America lists eight springtail families specifically associated with water. Many of these live in the ocean’s tidal zones and are best discovered by simply flipping over seaweed. But others, like Podura aquatica, are strictly fans of freshwater surfaces.

Felipe Soto-Adames and Rosanna Giordano of the University of Vermont studied springtails in the mid-2000s and included Lake Champlain in their collecting trips. They found a species entirely new to science near the Pine Street Barge Canal in Burlington. Fittingly, they named it Scutisotoma champi, after Champ, Lake Champlain’s legendary monster. They named a second springtail Ballistura rossi, for a much loved colleague, Ross Bell. This species was found only on a constructed wetland at the University of Vermont, where Dr. Bell spend most of his career.

It goes to show there is always something new to discover, some new science to invent, frontiers that remain unexplored. The pond you explore in your neighborhood likely contains life forms unknown to science, and maybe some of them are springtails.

Declan McCabe teaches biology at Saint Michael’s College. His work with student researchers on insect communities is funded by Vermont EPSCoR’s Grant NSF EPS Award from the National Science Foundation. The illustration for this column was drawn by Adelaide Tyrol. The Outside Story is assigned and edited by Northern Woodlands magazine and sponsored by the Wellborn Ecology Fund of New Hampshire Charitable Foundation.