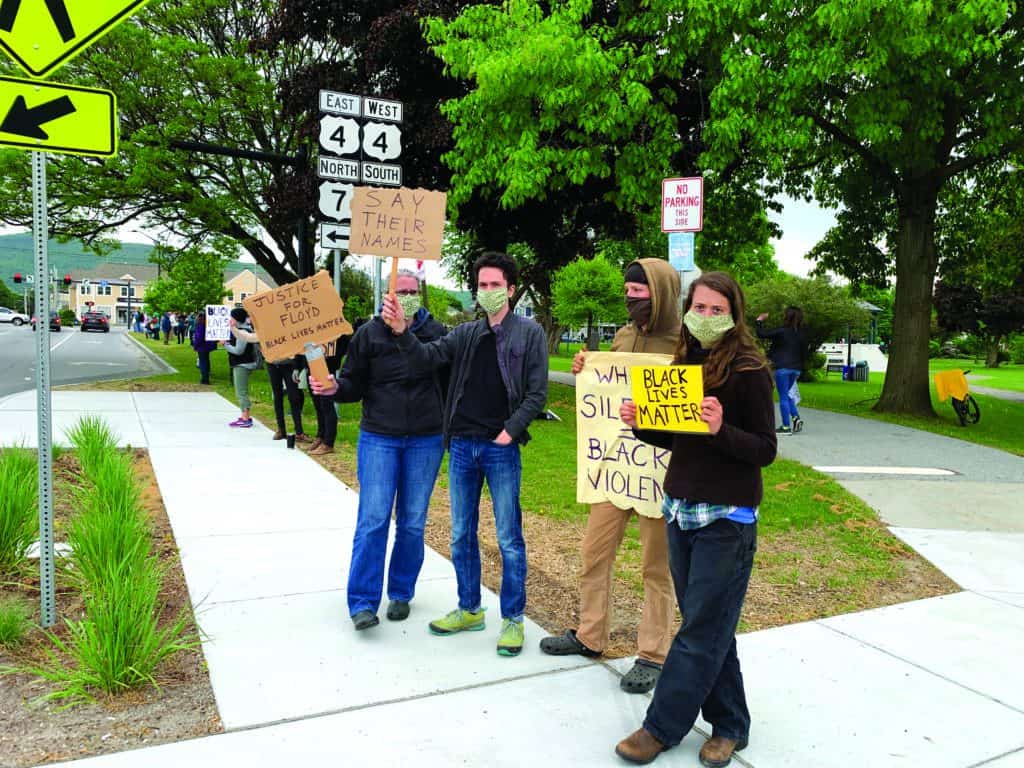 On Monday, June 1, protesters gathered in Rutland’s Main Street Park for a silent vigil in response to the police killing of George Floyd, as well as to commemorate the 100,000 American lives lost to Covid-19, who are disproportionately people of color.

The demonstration began at 5 p.m. and the crowd built over the scheduled hour. Over 100 people were in attendance holding signs and flags, and cars and trucks honked in support. Nearly everyone wore a mask, and people respected social distancing by standing a safe distance apart from other families or pods of friends, lining both the east and north sides of the park. Police stood by and watched. The protest remained peaceful.

African Americans have been disproportionately affected by Covid-19 in Vermont and nationally.

Nationally, “African American deaths are almost two times greater than what would be expected from their share of the population,” said Commissioner of Health. Dr. Mark Levine at the Covid-19 press conference Monday, June 1. “And 33% of those hospitalized are African American but only 13% of the U.S. population is,” he aded.

In Vermont, African Americans have a rate that is also almost twice that of the white population, Levine said.

What are the reasons for some of the disparities?

“I can’t tell you we have specific Vermont reasons but there are some well-adhered-to explanations that have been offered on a national basis and I’m sure that some of these do apply here, too.

“Discrimination that’s limited access to health and to wealth, increased exposure due to a disproportional representation in essential frontline jobs, greater reliance on public transport and exposure that might bring, there’s reasonably good data on discrimination in healthcare setting in terms of clinical decisions that are made around specific complaints,” Levine said.