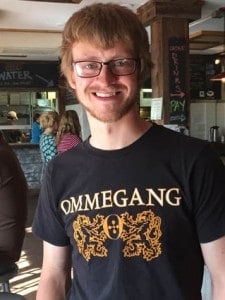 WOODSTOCK — Friday, May 29, Tom Poole of Rutland entered  Worthy Kitchen where his home brew was being served in a taste-off with fellow finalist Brett Seymour, of Warren, Vt. It’s the final days of a home brew competition that drew over 250 entries from amateur brewers statewide. Poole is a contender to win the entire challenge. The winner of the Make The Cut Homebrew Challenge will be announced the week of the Vermont Brewers Festival, which takes place July 17-18 at Burlington Waterfront Park.

The Make the Cut Home Brew Challenge, was created by the Beverage Warehouse and 14th Star Brewing Company with the goal of giving an aspiring Vermont home brewer the chance to compete commercially.

The hundreds of home brews submitted for the competition were judged by a panel of professional and amateur judges, who selected two finalists to brew a limited 120-gallon batch of their beer. These batches were then sold in tasting pairs at six participating Vermont craft beer meccas (Worthy Kitchen in Woodstock, Farm House Tap & Grille in Burlington, Mule Bar in Winooski, Prohibition Pig in Waterbury, Three Penny Taproom in Montpelier and 14th Star Brewing Co. in Saint Albans) along with a ballot for public voting. The ballots along with the judges’ scores will combine to determine the winner of the Make the Cut Home Brew Challenge.

Tom Poole’s entry was a Belgian Witbier. Poole, a physical therapist by profession, has been brewing beer at home for about eight years, experimenting with different recipes. “I never brew the same beer twice,” he said Friday at Worthy Kitchen in Woodstock. Rather, Poole likes to alter the proportions and ingredients in search of the perfect pint for family and friends to enjoy. When asked if he were pleased with the concoction on tap Friday, he said, “Yes, but it’s different again,” adding that the flavors of coriander were stronger in this batch than in others he’d made.

Poole’s Belgian Witbier has a “hallucinating haze due to the high level of unfiltered, protein rich wheat,” according to the description of his brew on the Make the Cut website. “Balanced by coriander and sweet orange peel then rounded out with generous carbonation, this easy drinking beer is perfect after a day of hiking, running or just relaxing,” the description continued.

Poole’s competitor is Brett Seymour, of Warren, Vt. who brewed a darker Schwarzbier. Seymour is a member of the Green Mountain Mashers, a homebrew club based in the Burlington area, and has been brewing beer at home for about seven years. “In a beer scene that is currently dominated by hops, Brett’s Schwarzbier proves that the right combination of malts can be just as interesting as the right combination of hops,” stated his description on the Make the Cut site. “This traditional, easy drinking, German style dark lager, is the perfect introduction to dark beers.”

Both finalist brews will be on tap at the six participating locations starting May 29 until they run out. The Worthy Kitchen expected it’s “two logs” (approximately 10 gallons) to be kicked by Tuesday, proving that both brews are indeed passing the test of commercial viability!

The winner of the Make The Cut Homebrew Challenge will be announced the week of the Vermont Brewers Festival, which takes place July 17-18 at Burlington Waterfront Park. The winner will pour their winning brew for the crowd as well as receive $1,000 from The Beverage Warehouse and be invited to brew production sized batches of their winning beer at 14th Star Brewing Company. The winner will maintain the rights to their recipe.