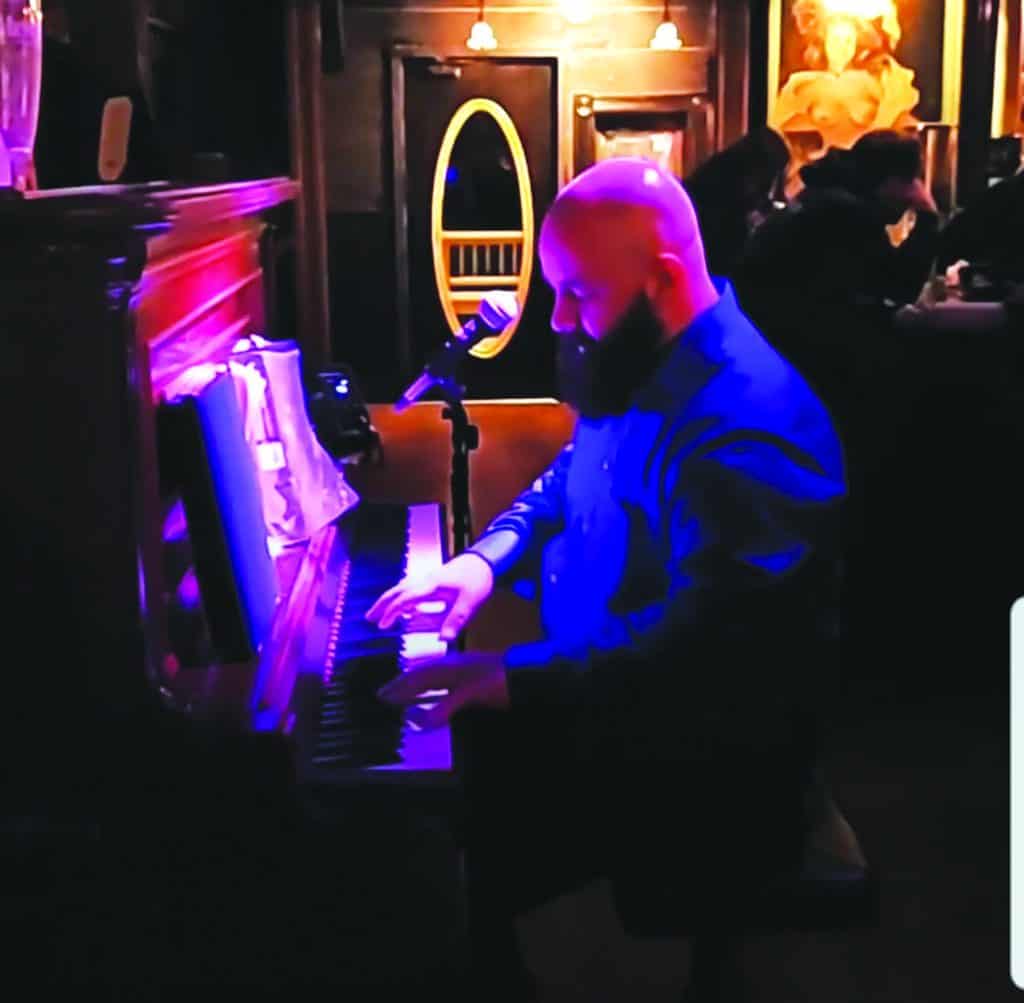 This Friday head to Du Jour VT in Ludlow at 7 p.m. to catch pianist Jake McLaughlin. He’s there every three weeks so you’ll also have two opportunities in February. You can see him most Saturdays at The Castle, also in Ludlow.

I saw McLaughlin last month at Charity’s and liked everything about his show. His great voice matches his piano playing and he knows such a wide variety of music. I first saw him play this past summer at Jerry Jam with his former band, “Totally Submerged.” I dug that, too.

He just got back from Orlando’s “Awesome Games Done Quick” video game tournament for charity. He said laughing, “Yes, I’m a little bit of a nerd.”

At the tournament, players speed run through the games trying to beat them as quickly as possible.

He likes playing songs from piano greats like Billy Joel and Elton John but also plays songs from guitar greats like Jimi Hendrix. He said, “I try and mix things up and play everybody’s favorites even if it’s things they wouldn’t expect to hear on piano.” Some of his other piano influences include Bruce Hornsby, Ray Mazarek (The Doors), Vince Guaraldi (The Peanuts), Leon Russell and Ben Folds.

McLaughlin plays from so many different genres of music like pop, Broadway, classical, jazz, classic rock and 90s. It depends on the mood he’s in for what direction he goes. But he said, “I feel my bread and butter is classic rock.”

He’s been writing music for 15 years with one CD, “802 Experience,” to his credit. That 2014 release can be found on CD Baby, iTunes and Amazon. He hopes to save some money and get back in the studio soon. Just like the music he covers, his originals don’t stick to one genre.

“Not everything sounds alike nor do I want to copy myself all the time,” he said.

His CD has rock, jam band, ragtime, jazz, stripped back acoustic folk, ballads and R&B. When he writes, it usually comes at a busy time when he’s doing something else. “I hope that I can hold onto this idea or write down a little fragment of it so I can work on it later. I’ve woke from a dream where I heard something and knew I had to write it down before I lose it,” he said.

His show at the Castle is just instrumentals during dinner hours but his regular shows like Du Jour have him playing and singing covers and originals. Feel free to shout out a request because he knows so much.

Mclaughlin, 31, grew up in Chester and started playing piano at age 9 off his mother’s encouragement. She told him that all the greats started with piano so that’s what he’s going to do. He really wanted to play guitar but as they say, “Mothers know best.”

“I really appreciate that she kept on me with it. I think it took about four years that I was playing and everybody else saw some potential in me that I didn’t yet until I started studying jazz and playing music other than classical,” McLaughlin said.

He would hear songs on the radio that he wanted to play. The Beatles, Coldplay and Pink Floyd became big influences on him when he was 14.  “Something clicked in my head and I said I guess I am pretty good at this. Let me see where I can go with the music,” he said.

McLaughlin’s first piano teacher taught him all she could for three years and then taught him organ so he could substitute at the church he grew up in. From there other churches needed substitutes and he started playing different functions.

After he started making a little money at it, he decided to pursue it more. He started getting the writing bug then, too. And he tried out some other instruments.

He said, “I’ve picked up and put down the guitar plenty over the years but I do have some confidence on that. I’ve written a few things with that instrument. I play ukulele and have written three songs on that.” He also played some bass with Totally Submerged and said he can keep a drum beat, if necessary.

He’s currently the church organist at Church of Annunciation Parish in Ludlow. His weekends are filled with piano and organ. Saturdays he plays the 4:30 p.m. mass and then The Castle at 6 p.m. Sundays he plays the 8 a.m. and 11 a.m. service in Ludlow but rushes out to Proctorsville to play the Chapel there in between at 9:30 a.m. He said, “Organ has a different feel than playing piano and is a different technique.”

He loves the fulfillment he gets and gives to others. He said, “I feel so happy because I know I’ve worked so hard to get where I am. I know I’m doing what I’m meant to be doing. I feel like I’m an instrument or channel myself to be able to get out whatever I’m feeling at the time, pick up what others are feeling in the room and putting that out there so we can all relate. Some good music, some sad music. I may start off in a bad mood but after playing everything and interacting with those people there, I’m feeling so much better. I feel it’s a catharsis for me and a great service for other people.”