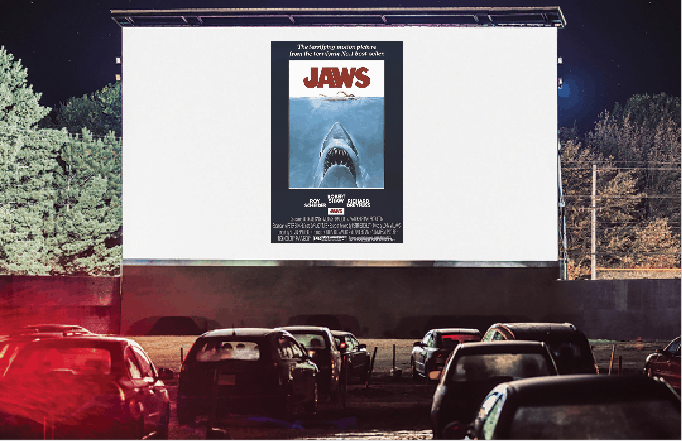 ‘Jaws’ kicks off the season on July 3

RUTLAND—The Paramount Theatre and Vermont State Fair are partnering to open a drive-in theater on the fairgrounds in Rutland. The summer movie series will kick off on July 3 with the original summer blockbuster, “Jaws.”

Covid19 has made it impossible for Paramount to host shows in its downtown Rutland theatre, so Programming Director Eric Mallette said they were looking for a different way to give the community something to do and enjoy this summer.  In talking with the fair association, a drive-in theater made perfect sense. The plan is to show movies every Friday and Saturday beginning July 3 and continuing through the end of August.

“It will vary a little bit depending on what we see for a response, but we are optimistic people will embrace this,” he said.

Admission will be limited to 85 vehicles and cost $25 per car, with no limit on how many people can be in a car.

“It’s our goal to make this as affordable as possible for families, given that times are tight right now,” Mallette said.

Tickets, at least for the first two weekends, will only be available in advance through the Paramount website (paramountvt.org). Vehicles will be allowed in through the Park Street entrance and movie-goers will be asked to observe social distancing and remain in their cars. The sound will be broadcast via radio so film-goers can listen on their car stereos. Showtimes will be at dusk — between 8:45 and 9 p.m.

Shows are weather dependent. The movies will be cancelled in the event of rain.

Mallette said the 600-square-foot screen — roughly the same width as the stage at the Paramount, will be a permanent structure built by volunteers and shows will  have the same HD projection capabilities used at the theater. Hopefully, the screen will live at the fairgrounds indefinitely, enabling drive-in movies to be shown for years to come.

Rutland has not had a local drive-in since the 1970s. Previously located where Alderman’s Chevrolet is now, the last drive-in  closed in the mid- to late-1970s. But social distancing measures have created a renewed interest in the format.

Mallette said the full line-up is still being determined, but it will not include first-run movies. The goal is to pick films with a wide appeal, keeping in mind that younger children will likely be excluded because of the late start time. They are looking more at the “teenage-plus demographic.”

Malette said “Jaws” seemed like a natural choice for the opening weekend.

“People probably aren’t going to be spending much time in the ocean this year anyway,” he said.