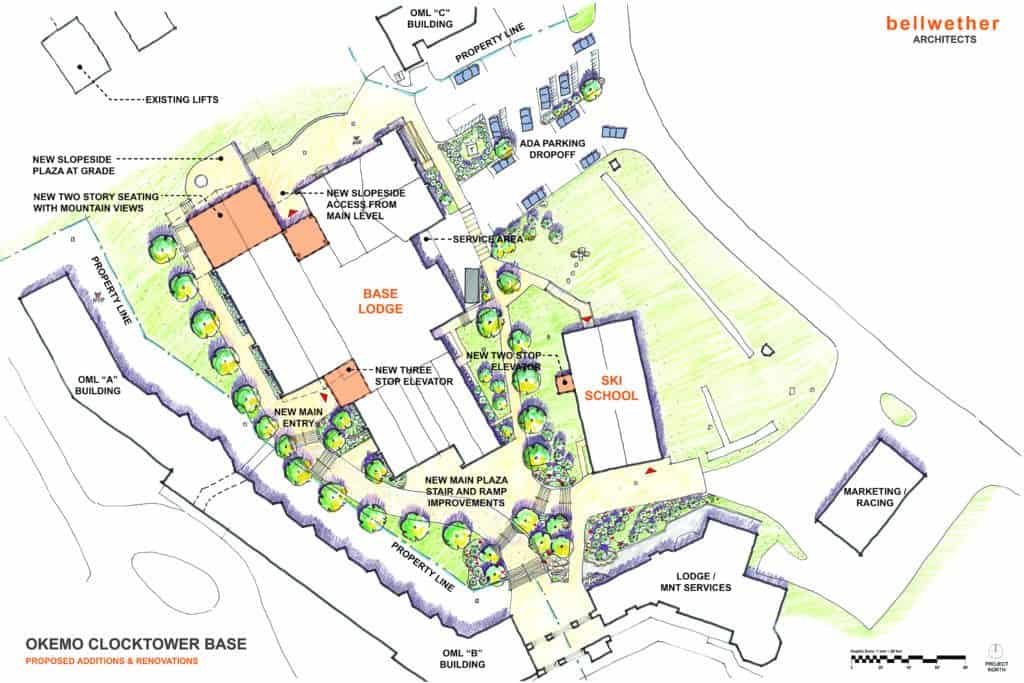 Okemo to set receive upgrades as part of Vail Resorts, Inc.’s $215 million investment for 2020 across its resorts. This investment builds on the approximately $190-$195 million that Vail Resorts had planned to spend on capital improvement projects in calendar year 2019.

The majority of the new investment at Okemo will be in lift, lodge and dining updates.

The current second-floor administrative offices (above the children’s Snow Stars Center) will become ski school space. The addition of children’s rentals and an elevator in that building will make it easier on families and make the entire experience “that much better,” said Vice President and General Manager Bruce Schmidt.

Other lodge renovations and upgrades for this season include the Summit Lodge, which looks the same on the outside but with knee walls removed, the main floor feels larger with an open floor plan and new décor, Schmidt said. The lower level has a new Robin’s Roost venue featuring a bar and wait service.

The mid-mountain Sugar House Lodge has also been spruced up and features a children’s area called the Mudroom on the lower level with a kid-focused menu.

On the third level, an area with TVs was created to allow parents to watch races on War Dance from inside the lodge.  The Epic restaurant at the Solitude Day Lodge also received new décor and is now known as 43° North.

When Okemo opened for the season on Friday, Nov. 22 with 28 trails and seven lifts operating, it was the biggest opening day in the resort’s history, based on both terrain and lifts open.

This feat was largely the result of a five-year snowmaking project that saw completion in 2019 with replacement of all the main snowmaking water feed lines that originate through the Clock Tower base area.

In a presentation to media this past weekend, Schmidt noted that these were 10-, 12- and even 16-inch diameter pipes, adding they “make a difference these days.”

While skiers and riders don’t actually see the pipes, the installation of 5,000 feet of pipe in 2019 — along with the associated underground communication lines and power work — mean these feeds supply all the water to Okemo’s entire snowmaking system and under optimal conditions, allow the pumping of 7,000 to 9,000 gallons of water per minute.

This allows Okemo to open for the season with top-to-bottom terrain and recover quickly following a weather event. And that’s something skiers and riders can notice and do appreciate.

Epic Mix, a free app that can be downloaded for iPhone or Android mobile phone is expected to come online mid-winter. The company plans to completely revamp its EpicMix mobile application. It will offer new functionality and an improved user experience, including new interactive trail maps and account features, while retaining key features like vertical feet tracking, photo sharing, and transparent lift line wait times.

The changes for Okemo include replacing the Quantum Four Express lift at Jackson Gore with an express six-seat lift. The Quantum Four quad will replace the Green Ridge Triple on the main mountain, and a new trail will be cut to allow direct access to that lift from Jackson Gore (without having to take the Solitude route) to get there, Schmidt said.

“As our company grows, we are determined to grow thoughtfully and with our mission always in mind: to create an “Experience of a Lifetime” for our guests,” said Rob Katz, Vail Resorts chairman and chief executive officer in a news release about the upgrades released last week.

The auction company wasn't able to tell us who bought it yet. Does anyone know? ... See MoreSee Less

The former snow Angel Tavern, located on Route 4 in Mendon sold at auction on Jan. 15. Mike Carey, senior VP of Tranzon Auctions, who oversaw the sale said he was unable to disclose the price or buyer...
View on Facebook
·Share