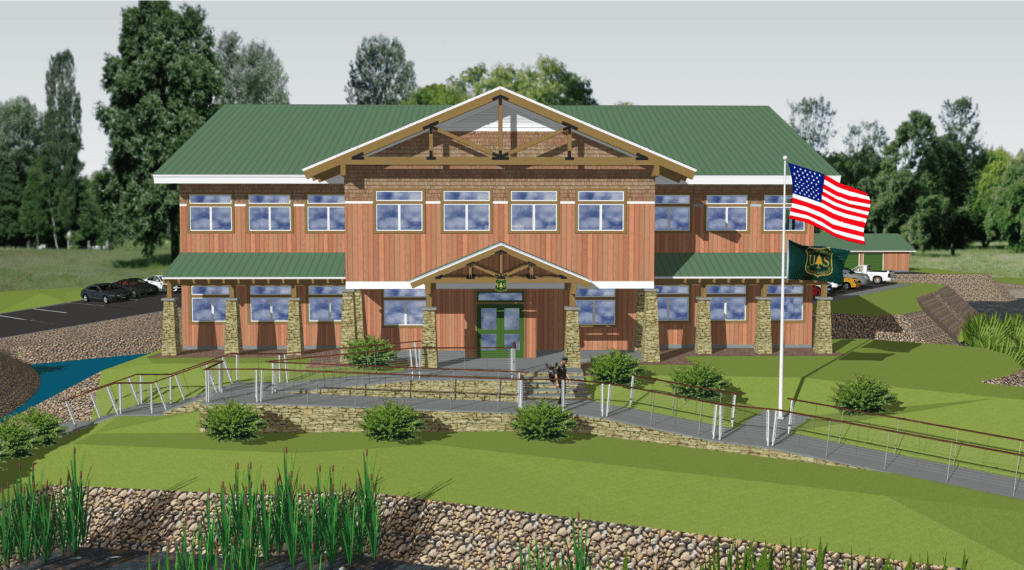 This architectural rendering shows the planned 11,550-square-foot building that the U.S. Forest Service will build off Route 4 in Mendon thanks to a $6 million appropriation secured by Vermont U.S. Sen. Patrick Leahy.

MENDON — Saying that the Green Mountain National Forest will finally be able to put its Rutland-area Supervisory Office where it should be, Sen. Patrick Leahy’s office and GMNF officials officially announced plans on Thursday, Sept. 10, to build a new $6-million facility on Route 4 in Mendon. Construction will begin next spring, and it is expected to be completed by fall 2021.

The new Forest Service building will house about 65 part- and full-time employees and provide a more appealing visitor center.

“It will be a gateway to greeting visitors” on a highly traveled state corridor, Leahy said of the new building in a phone call from Washington, D.C. Leahy added that he hoped the public feedback, which visitors provide through this center will help the Forest Service respond to suggestions and ways to meet users’ needs for years to come.

“It’s wonderful to be able to help provide funding for this building today, after working on this idea since the early 2000s,” Leahy said, but added that he was most “excited about how it will help boost the state’s outdoor recreation economy.”

Leahy noted that the state’s outdoor recreation economy has been booming for the past couple of decades and should continue to be a bright spot in the state’s economy. Efforts like this new building with high visibility to visitors add to that ability for decades, he said.

The 11,550-square-foot building will be a new, public-facing, federal building on Forest Service land, according to USFS memos. The site is less than three miles from the Long Trail/Appalachian Trail crossing (top of Sherburne Pass) and will enable the U.S. Forest Service to greet visitors with outdoor exhibits and trails and “with a greatly improved visitor experience.”

The site is along the north side of Route 4, approximately five miles east of the intersection of Routes 4 and 7. It is directly across Route 4 from Woodward Road. The new headquarters will replace the office currently at 231 North Main St. in Rutland. The site work contract has been awarded to VMS Construction of Rutland.

For about two decades the GMNF has looked to position its headquarters in a more forested area, offering scenic views and more interpretive services to Vermonters and visitors.  This building will serve as the Supervisor’s Office for the GMNF and Finger Lakes regions.

The GMNF has maintained a headquarters in the Rutland area for the past 70 years and identified the need to construct a new supervisor’s office as part of its Facilities Master Plan in 2000. The current facility is not owned by the agency, nor does it reside on National Forest System lands.

“While we will miss many aspects of being in the city of Rutland, we are happy to have a space that we can call our own and tailor to the needs of our employees and the public,” said Sinclair, adding that avoiding the costs of leasing in future years will greatly benefit the GMNF’s annual budget.

David Carle, director of press relations for Sen. Leahy, explained that the Vermont Democrat’s work on the FY20 Interior Appropriations budget helped include the $6 million in funding for the new GMNF facility. Carle noted the senator worked with the Forest Service to advance planning for the new headquarters building in the early 2000s, when the site on Route 4 in Mendon was identified as ideal, and preliminary work was done to secure state review for traffic and develop initial site plans.

As demands related to the national backlog of facilities and maintenance work continued to grow for the National Forest System, Carle said, the project was not advanced for a number of years. Then, “as vice chairman of the Senate Appropriations Committee beginning with fiscal year 2018, Sen. Leahy was able to add increasingly directive language that results now in the construction of the facility.”

Besides his long-time support for this facility, Leahy has been a life-long champion of the expansion of recreational land. Since Sen. Leahy took office 1975, the GMNF has expanded from about 300,000 acres to more than 400,000 acres, much of it with Leahy’s active support.

That foresight has served Vermont well as the recreation economy has grown rapidly with greatly expanded hiking, biking, skiing, equestrian, hunting and other opportunities in the forest. The expanded forestlands also support Vermont’s timber economy, Carle said, adding that timber harvest has increased substantially in recent years to 3 million to 5 million board feet annually.

Leahy also was a sponsor and strong backer of the Great American Outdoors Act, which passed Congress this summer and was signed by the president. That legislation not only included the language to fund the proposed GMNF building in Mendon, but also addressed the maintenance backlog of forest service infrastructure and trails throughout the country.

Of his role in promoting the national forests, Leahy said the goal isn’t just to provide short-term improvements, but to create access to the outdoors for “our grandchildren and theirs.”

“You don’t just do this for today, but the next generation and the generation after it,” Leahy said. “You sort of take these lands for granted, but we shouldn’t…I see this new building and the National Forests as a living thing… I hope we can continue to get public feedback and keep making improvements (to the forests) as needed.”

the Allens have gone from newbie sheep farmers to the center of Vermont's wool culture in less than a decade. Read about them, and listen to the podcast, too. omny.fm/shows/my-side-of-the-mountain/sheep-farming-and-vertical-integrationmountaintimes.info/integrating-vertically-at-savage-hart-farm/ ... See MoreSee Less

It started as a joke: What if we had a sheep farm? Nine years later, Peg and Todd Allen know sheep. They raise lambs — “the finest colored Corriedales in New England” — produce yarn, and now, ...
View on Facebook
· Share

By Neil P. Allen KILLINGTON—On July 20, the Killington Planning Commission voted to accept the VHB Killington Road Survey Study, and will be forwarding the study to the Select Board to enact on the ...
View on Facebook
· Share

Reading votes to move to Australian balloting - The Mountain Times

On Saturday, July 24, the residents of Reading voted in a special election to determine whether or not the voting mechanism on town meeting day should change. According to Reading resident Shiri Macri...
View on Facebook
· Share

Be sure to check out the Brandon Carnival this weekend. More here: mountaintimes.info/the-brandon-carnival-is-back/ ... See MoreSee Less

The Brandon Carnival is back - The Mountain Times

Setting off fireworks just got even more difficult in Killington, but time will tell if it stops the recent boom of explosions.mountaintimes.info/killington-to-require-fireworks-permits/ ... See MoreSee Less

By Curt Peterson Inspired by the still-mysterious explosions set off over several nights this summer, the Killington Select Board decided at their July 20 meeting to reinforce Vermont state fireworks ...
View on Facebook
· Share