On Monday, March 23, Mayor David Allaire declared a state of emergency for Rutland. The move gives him greater unilateral power to take action and move quicker to ensure the safety of Rutland City residents. While Allaire made no indication that he planned to use the power immediately, he said he felt it important to have the authority to do so if or when needed. Emergency declarations have been made in the past to deal with extreme weather events like Tropical Storm Irene.

The emergency declaration comes after three people in the Rutland area tested positive for the coronavirus over the weekend, and one more on Monday bringing  the total for Rutland County to five confirmed cases. By comparison, Windsor County had 15 confirmed cases as of Tuesday, which is second most to Chittenden County, which had 40. There were 95 statewide as of Tuesday morning, March 24 — 7 have now died in the state.

By law, the identities of those three people are protected. However, one was an employee of GE and another was a clinical staff member at Rutland Regional Medical Center.

GE Aviation, which employs 1,400 in the region, manufacturing commercial and military engine blades and vanes, announced it would temporarily close its facilities in Rutland after a plant worker tested positive for COVID-19.

The company reached out to employees Sunday, March 22, and told them not to report to work until Wednesday morning.

“We are partnering with public health officials on contact tracing and notification of impacted people at our site,” the company said in a statement late Sunday afternoon. “We continue to take all necessary precautions and prioritize safety.” The site will be cleaned and disinfected, the statement continued.

The company’s statement said that employee has not been at work since March 18.

“We are contacting employees who had close contact with this co-worker and asking them to self-quarantine,” the statement read. “This action is being taken in conjunction with public health officials and is consistent with CDC guidance.”

Rutland Regional Medical Center CEO Claudio Fort posted a video on RRMC’s Facebook page Monday night, in which he addressed the clinical staff member who had tested positive. “We have conducted contact tracing and have notified the Vermont Department of Health and we are providing information to patients and staff who have been in contact with this staff person,” Fort said. “I think this brings a lot of fear and anxiety into the community.”

Fort went on to implore folks watching to abide by the best practices laid out by the Center for Disease Control (CDC) and to contact their primary care doctor if they feel they have symptoms.

Tests are very limited, but testing won’t affect care protocol for most. 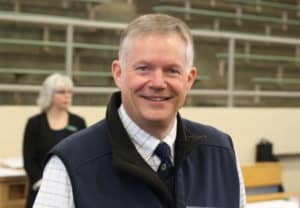