Learning a new skill at 40 can be terrifyingly fun

Killington Resort officially opened for weekend-only Downhill Mountain Biking (DMB) on Saturday, May 29, kicking off the 30th season of the Killington Bike Park.

Ironically, Mother Nature also decided to blanket the mountaintops with snow that day. On Sunday temps were in the low 40s and the impending doom of rain chilled things down to the bone. Memorial Day was mostly a washout. But to me and many others it seemed like as good a time as any to get out there! It would be my first time riding downhill.

I was surprised to find a lift line, even given the inclement weather, but much like the beginning of the ski season, pretty much all the best downhill mountain bike riders with the sickest, most appropriate gear were there, making me question my footwear decision: muck boots.

I walked my bike through the maze, trying to ignore all the (literal) signs that this might actually be dangerous and rolled quickly through the singles line. At the front, I randomly loaded the lift with two guys I remember from snowboarding, ya know, two weeks ago.

I expressed my concern over it being my first time, but they assured me, I’d be fine. This instilled at least as much confidence as two mountain friends’ opinions ever could.

At the top of the Snowshed lift, I finally realized something. That bunny slope trail I can rip down in about four seconds on my snowboard? It looks a lot longer and scarier without snow and with every single rock showing…

But, I was committed. One of many rules to live by at a resort if you wanna hang with the locals: you never take the lift down — unless walking is your only other option. And since I did have a bike, I was doing it, dude!

I procrastinated the inevitable by snapping some pics of the lush greenery and dark clouds from Vermont’s final (I hope) cold spell of the season. My friends on the lift, my associate on the park crew and the signs at Killington all suggested I take it easy for my first run in 25 years. So as any logical person might do, I opted for “Easy Street.”

With a name like that, how could I go wrong?

Turns out, DMB is all go (no right or wrong)! Something about gravity, I think. Thankfully, the fresh new brakes on my bike worked well — I tested them aggressively. I also tested the brakes and skills of everyone who ripped past me as I tried hard to convince myself to let go just a little.

The actual experts zipped past shouting “on your left,” as if my brain could possibly tell the difference between directionals while I white-knuckled around the berms. One guy shouted out a supportive, “You’re doing great” as I squealed an apology for being little more than a slow-moving obstacle.

But through whatever miracle, I bounced, skidded and bobbled my way down the first half of Easy Street, coming out unscathed on a nice flat service road.

There, two younger riders waited for their crew with grins on their faces. “You guys do this for fun!?” I excitedly exclaimed, “This is terrifying!”

They laughed, disagreed and pointed me in the direction of “Roller.”

“It’s the easiest way down,” they said.

The good news is, on the second half of the trail, I actually did feel slightly better. Roller was, as advertised, rolling enough that I didn’t need to hold my brakes the whole time. In fact, for a second I didn’t even feel like a beginner! I mean my outfit still screamed “Jerry,” but the loosening tension in my back said, “you might make it down without dying!”

In fact, by the third section of Snowshed, I was actually starting to be the one doing the yelling while riding. I passed a group of women who had stopped to enjoy the view.

“What did they do with all the snow!?” I shouted without pause, making myself cackle and eliciting a classic East Coast sarcastic, “Sorry” from one of them as I rode away.

When I finally emerged (unscathed) at the bottom and could see the lift, lodge and parking lot, it was executive decision time. As a fresh downhill mountain biker, it was a quick one to go back to the car and switch to skateboarding.

My back and legs hurt, and I was ready to not suck at something again. That said, the season just started and I’ll be back with a few more pads and a full-face helmet soon!

On June 18, operations will expand to Ramshead and the lifts will spin seven days a week. 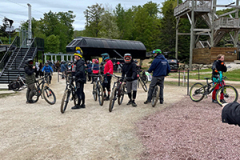 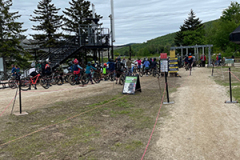 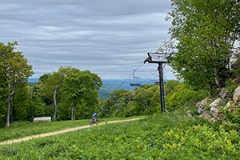 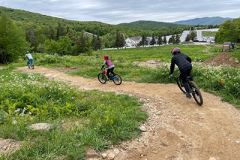 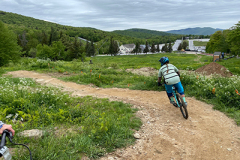 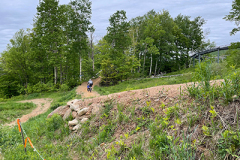 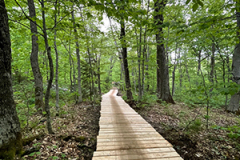 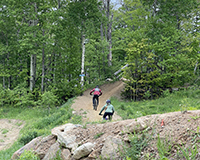 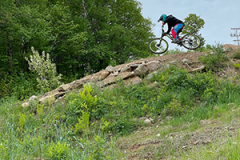