KPAA and Killington Resort annual meeting highlights past success, future projects, new marketing initiatives
By Polly Lynn Mikula
“The vibes between the resort and community have changed in past 10 years. There is good communication, a sense of fun,” said Herwig Demschar, Powdr Corp. senior vice president for international business development, opening his portion of the presentation at the KPAA and Killington Resort annual meeting on Wednesday, Sept. 21, at Killington Resort’s Peak Lodge. Demschar’s presentation focused on the upcoming World Cup being held at Killington, Nov. 26-27. (Read the ongoing series of World Cup articles at mountaintimes.info.)
Successful collaborations between the resort, town and Killington Pico Area Association (KPAA) was the common theme Wednesday night, with nearly every speaker commenting on progress made through their partnerships. KPAA update
Howard Smith, president of the KPAA, began the night with some official KPAA business, which included recognizing retiring board members, voting on and welcoming new board members as well as a new executive board. New board members include: Marylou Scofield, Marylou Scofield, P.C.; Amy Laramie, Killington Resort; and Candice McRacken, Mountain Meadows Lodge. The new executive board includes: President: Howard Smith, Sushi Yoshi; Vice President: Tracy Taylor, Killington Resort; Treasurer: Candice McRacken, Mountain Meadows Lodge; and Secretary: Mike Solimano, Killington Resort.
Amy Morrison, director of the KPAA, then presented an overview of the organization’s work.“Over the past five year, we have increased revenues to the organization by 60 percent,” she said, “And we welcomed 33 new members this year.”
New this year, KPAA members receive 25 percent off the advertised rate for a mountain bike season pass at the resort—something many members had asked for, she said. Additionally, the KPAA is supporting the effort to build cross-country mountain bike trails near Kent Pond. The first two miles of trails are scheduled to be complete “in two weeks,” with more expansion scheduled for next year, Morrison noted.
The KPAA has helped to produce 100 events between Memorial Day and Columbus Day this summer, Morrison said, which helped to bring more visitors to the area.
Finally, Morrison highlighted beautification projects in town, including the covered bridge sidewalk on Killington Road, which was completed earlier this summer, and a pocket park, which is currently being designed between Moguls and the Killington group. 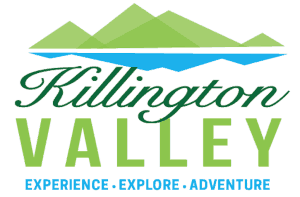 Regional partners collaborate on “Killington Valley” marketing
Guest speaker Lyle Jepson, representing the Rutland Economic Development Corporation (REDC) and Castleton University, addressed the attendees and explained that Killington’s collaborations were a model for many others, and Rutland organizations were taking note of Killington’s successes. The Rutland Alderman are talking about Killington, he said, by way of example. “I’ve never seen everyone moving in the same direction as I do right now,” Jepson said.
Rutland area organizations share common goals for growth, Jepson said, and by partnering together we can have a larger impact, he added. Therefore, an organizing committee has been established to brand the region as “Killington Valley.”
The first effort was to market the Killington-Rutland region as a destination for mountain biking. Jepson showed attendees a video that highlighted young adult bikers riding Killington Resort, the Green Mountain Trails in Pittsfield, and Pine Hill Park trails in Rutland, while enjoying some area restaurants and coffee shops along the way.
“Killington Valley” marketing will be aimed at attracting millennials, Jepson explained. “We want people to say ‘I want to be there; I’m that person!’” he said.
There are 2,000 students on Castleton University campus, and the goal is to keep them in the state after graduation, to dispel the myth that there are no jobs, that they can’t stay here, Jepson added.

Resort progress, planning
Transitioning to the resort’s portion of the night, President Mike Solimano, who typically reviews the past season in detail, opened by saying: “I’m going to try not to spend too much time on last year, as it was kinda painful.”
Audience members laughed in agreement.
Solimano, however, did share that the Northeast, as a region, was down 28.1 percent last season compared to the season prior. A few other charts showed upward trends over the past few years in various categories take a nose-dive due to the abysmal snowfall and weather last season, which was among the worst ever recorded.
Focusing on the positive, Solimano highlighted the continued progress the resort has made on its strategic plan since he took the helm four years ago as president. “The goal has been threefold: grow volume, improve hospitality, increase summer activity,” he said.
Killington has successfully grown the volume of skiers and riders by going back to some of the core principles that have historically made Killington successful: a commitment to snowmaking, opening early and staying open late, he said. A consistent identity is also important: “We are the Beast of the East,” he added.
The resort’s focus on hospitality saw scores for employee friendliness and cleanliness improve last winter, despite the lack of snow which made the total Net Promoter Score decrease.
“We want to create a culture of improvement,” Solimano said. “The bar continues to rise and competition continues to rise. We must continue to elevate the experience.”
Solimano said Powdr is committed to Killington and pointed to the increased investment Killington has received since Powdr took over beginning with the 2007-2008 season: $4.82 million per season under Powdr ownership versus $2.25 million per season under ASC, he noted.
This year Powdr has also expanded its Multi Alpine Experience pass (M.A.X.), which is aimed at uncommitted guests, Solimano explained. With the M.A.X. pass skier and riders can now ski 32 different mountains under one pass, thanks to wide-ranging partnerships.
Leaving the summer activity update for Tracy Taylor, Solimano concluded his portion of the presentation with the new Witchcraft festival, being held Columbus Day weekend.
“It’s a new festival to celebrate all things autumn,” Solimano explained.
The resort plans to turn Snowshed base lodge into haunted house and has hired a professional company to make it one of the best in the region, paying $60,000 for their efforts.
The goal is to eventually expand the festivities to all four weeks of October, right through Halloween, Solimano said.
Tracy Taylor, business development manager at Killington and Pico, concluded the presentations Wednesday night by highlighting the opportunities for summer growth.
“The ski business is flat at best, I’d argue it is declining,” he said, whereas the market for mountain biking is “exploding.” There are 30 million active mountain bikers in the U.S. compared to 10 million active skiers and riders, he said.
“Our goal is to be the mountain bike capital of the East,” he said, adding that the resort just completed its third year of a five-year master plan buildout that will give Killington the largest trail system in the east.
Gravity Logic, the company credited for Whistler’s bike park success, is overseeing Killington’s five-year master plan. In 1999, Whistler had 10,000 rider visits, by 2013 visits grew to 130,000 and last year in 2015 they hit 150,000 rider visits.
This summer Killington had about 12,000 rider visits; the resort is projecting to hit 20,000 by 2018 and continue growing from there.
Summer ticket sales in total have grown from 15,000 in 2014 to 47,000 tickets in 2016, according to a chart Taylor showed the audience Wednesday.
The resort has spent $5 million in summer investments over past two years, the majority of which has been on its mountain bike expansion, but this year it also added a 30-foot jump tower,  summer tubing lanes and a new zipline to the Adventure Center offerings.

Photo by Polly Lynn
Killington Resort President Mike Solimano presents at the Peak Lodge in front of a stunning sunset at the KPAA and Killington Resort annual meeting on Wednesday, Sept. 21. The event was well-attended.