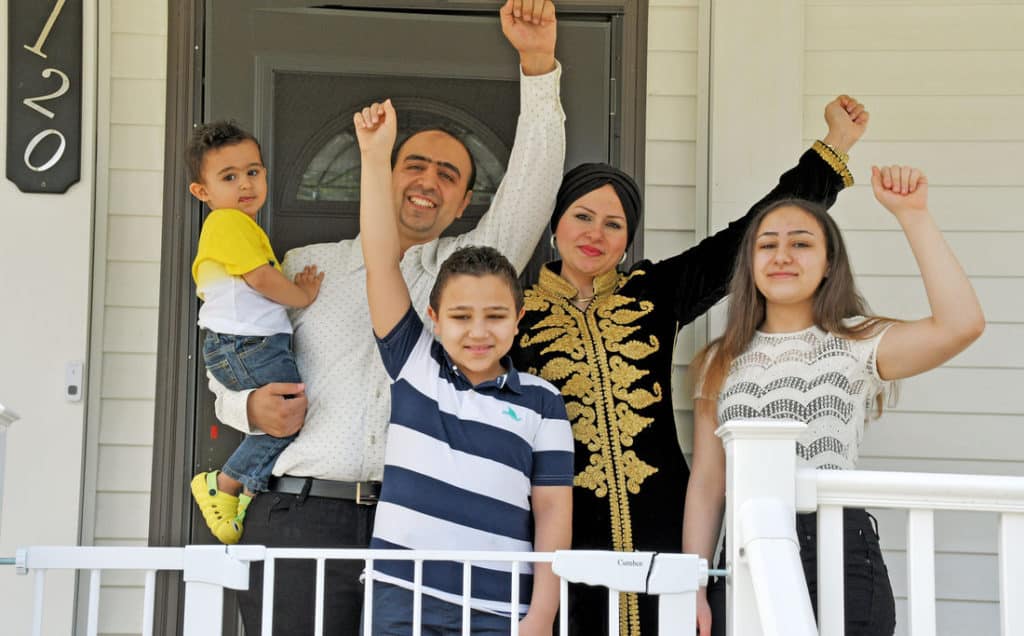 After 9 years of shuffling between different housing situations since fleeing their home country during the Syrian Civil War, Hassam Alhallak and his wife Hazar Mansour finally have a place to call home again.

With the help of about 200 volunteers, the family moved into their house on Crescent Street in Rutland on July 1, which was purchased with the help of Habitat for Humanity of Rutland County. The four-bedroom house, with 1 and a half bathrooms,  was officially dedicated to the family on Saturday, Sept. 26.

Before coming to Rutland, Alhallak and Mansour spent four years living in a basement with their two children and about 100 neighbors in Syria while gunfire and bombings ravaged the streets outside their home.

“It was scary,” Alhallak said. “I was worried and scared for my kids.”

The family stayed in Syria as long as they could, hoping the war would end.

“We were thinking, ‘maybe it will be done, it will be finished’,” Alhallak said.

When the war wasn’t getting any better, the family left their country and fled to Turkey where they lived in a small apartment while undergoing two years of background checks before being cleared to come to the United States in 2017.

Alhallak and Mansour didn’t speak English, didn’t have a car and didn’t know anyone when they first arrived. They lived with a family in Rutland briefly before moving into another small apartment in Rutland, not big enough for the family to eat a meal together.

Their new larger home is part of a new beginning for the family of now five.

“We are very excited now,” Mansour said. “It’s more space for us. We can say it’s more safe and no more moving.”

Alhallak, who was a successful accountant in Syria before the war, and Mansour, a former French teacher, lost most of their savings before coming to the United States, but they’ve quickly settled into Rutland and become well-known community members. They both learned English and took accounting classes at the Community College of Vermont. Mansour now works as an accountant at Rutland City Public Schools while Alhallak is an accountant for Casella Waste Systems.

“We have a good school for the kids and a good place and nice people,” Mansour said. “Everything is good. It’s a very good place to buy a home.”

Construction of their house started in July 2019 after locals helped raise about $125,000. Alhallak’s colleagues at Casella Waste donated $17,000 last year, which was matched by the company to close a $35,000 funding gap.

“It’s one of the nicest houses on the block at this point,” said Diane Alberts, the administrative coordinator at Rutland Habitat for Humanity.

The family has made Rutland home, despite several groups in the city opposing refugees arriving.

“Everyone who comes across them seems to think the world of them,” Alberts said. “It means finally that they feel safe for once.”

Alhallak and Mansour have eagerly learned new skills. They were part of the construction team for their house.

“I built my house,” Alhallak said. “I was very excited to learn about construction. If I have to fix something, I can fix it now.”

Additionally, the house was built efficiently.

“​The house scored a 34 on the HERS Index —a fantastic score, especially for a house that doesn’t feature any renewable energy,” said  Jeff Manney from Efficiency Vermont.

“It’s good to be home after a long time,” Alhallak said.