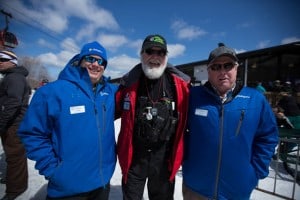 Few know his real name but everyone in the greater Killington family knows Grizz.

Ambassadors Laurie Canterbury and Marianna Kulina surprised Grizz with a huge 120-page “Memory Album” filled with photos and stories contributed by Ambassadors. They were also among the many speakers who paid tribute to their leader’s dedication to the program, particularly his passion for inspiring some 300 volunteers to provide a positive experience for Killington guests by being helpful.

In her remarks, Kulina shared the special qualities that she appreciated in Grizz, citing his extreme dedication, long hours on the job and his extraordinary interaction with guests, children, employees and Ambassador volunteers.

“Frequently, you remind us that we the Ambassadors make this program successful, but the direction we obtain from you is a key element to that success,” she noted.

Kulina also said that Grizz instilled the concept of “wanting to wow the guests about Killington,” likening it to “the wow factor of visiting Disney parks and the great memories made there. It takes a while to acclimate to a new place, and we help with that and that helps make guests happy,” she explained.

Ralph Rizzuto echoed Kulina’s gratitude for “all Grizz has done for the program and guests”, praising his philosophy of life and likening it to “a ‘brighten your day’ card. Use common sense and good judgment, do the right thing and do it right,” were some of the things he learned that made him show up early for Grizz’s presentations at morning meetings, Rizzuto said.

Grizz updates Ambassadors on conditions and events and gives out assignments at 7:20 a.m. weekend (8:20 midweek) meetings. Ambassador Joe Schorle fills in for Tuesday and Wednesday meetings to give his much appreciated leader time off. Ironically, on his days off, Grizz was constantly reading emails and getting ready for the weekends.

Reading from a letter from Glenn Jacobi, Laurie Cantrell told how a skier who’d been visiting Killington since the 1970s and skied alone because he wasn’t an expert, met an Ambassador who recommended he call Grizz in the late 1990s.

“When you said I could become an Ambassador I was like a little kid. When I got my Ambassador coat I slept with it,” Jacobi wrote of his excitement in joining the program.

He also noted his former shyness and the challenge Grizz gave him to lead the Meet the Mountains tours. I got over it after you gave me the talk… you set the tone,” he said of the impact of Grizz’s teaching and reassuring ways.

Dan “Frogger” Reilly commented on how Grizz had impacted his life, expressing gratitude “for what he does for me outside the program… how much he’s done for me,” a reference to his past surgeries, adding that Grizz is “truly is a brother.”

Along with the many testaments praising what they were taught, how the group became a family and how Grizz “makes us better at what we do, what we are,” as Warren Dimattia expressed it, there were ample stories. “I was learning to talk on the radio, pushed the button and heard: ‘Improper use, come see me at the peak,’” Dimattia recalled.

Caroline and Bob Germond presented Grizz with two photo albums, one of the Ambassadors and the other of training events, expressing wishes that Bob’s photographs would bring Grizz as much pleasure and as many smiles as the Germonds had derived from being in the program.

Grizz’s wife Nan echoed his absolute dedication to the program, drawing laughter as she admitted she didn’t get up with him at 5 a.m. when he starts his day. She noted he often came home so tired that he fell asleep in his chair before she got dinner on the table. He would then work into the late hours, she added, figuring out the next day’s assignments.

“He lived and breathed this program. He was very proud of every one of you. You had him for 22 years, now it’s my turn,” she said, eliciting appreciative laughter.

Pete Duffy, the Ambassador co-ordinator who has been training with Grizz to become the next Ambassador director, presented Grizz with the new green Ambassador jacket that will be worn next year, welcoming him to return to the family and reminding him to “obey the rules.” To which Grizz quipped, “Now I’m going to ride and duck ropes and break every rule. People will come to Pete and ask, “Who’s that Ambassador?’”

Joining the Ambassadors and becoming Grizz

When Puchalski first skied at Killington in the 1960s he vowed that someday he would “get a job there.”

Following 22 years working as an engineer in the Virgin Islands, he moved to Rutland in 1989 and spent time with his family. They traveled around North America in an RV during the summers. (Grizz and Nan have RV travels in their retirement plans.)

While snowboarding on South Ridge in 1995, Puchalski spied a little boy who had gotten stuck on the triple chair, crying as he rode the lift down the hill. He managed to snowboard down under him through some non-trail terrain and convinced him not to jump. The boy survived the ordeal although the snowboard didn’t.

That episode led to Puchalski, who has a penchant for helping people, becoming the first snowboarding volunteer in the Killington Ambassador Program.

Soon he was handing out candy to guests and convincing management that Ambassadors should be all over the mountain and serving midweek as well as weekends.

He became director of the program in 1998-99 and generally energized the Ambassadors by implementing more ways that the volunteers could provide assistance to guests and later expanded the program to offer assistance at events year-round. He also began doing a morning TV show—”The Grizz Report”—updating guests on the weather, events, which trails were groomed and his “pick of the day.”

Not one to be shy, when he took a Meet the Mountains tour and the guide was going to ski some novices down a hard Bear Mountain trail, Puchalski insisted on the easier Wanderer/Falls Brook route (now Bear Cub). Then he convinced management that the Ambassadors should give the tours and be trained to do so.

He also was not one to remain idle when he overheard some guys joking about leaving their friend alone in the woods in a snowstorm. He located the beginner, “scared and hugging a tree on Julio, one of the toughest tree skiing areas on the mountain.”

Puchalski got him safely off the hill, and when he finally got back inside, friends yelled out, “Hey, there’s Grizz.”

He was coated white from head to foot and with his six-foot-four frame and bushy beard, the grizzly bear image led to the “Grizz” and “Grizzly” monikers that people know him by.

By recognizing the importance of Ambassadors as facilitating a good guest experience, Grizz made a tremendous difference for Killington and in the lives of the Ambassador family who grew to admire, respect and love him as much as he loved being their leader.

Best wishes to Grizz and Nan for a happy retirement, which officially starts on May 1, Grizz, in case we need to remind you.